The goal against really bugged me and I will touch on that shortly, but if you have not seen the match and missed Robinho’s sitter in the 29th minute then you don’t understand anger! Back to the goal for a moment, it was a well worked goal by Ajax, with Suarez being the danger man as expected, but a positional breakdown and lack of cover out of Milan was the most alarming. Nesta was nutmegged in a spot that should have been occupied by Zambro, Silva was beat behind in a spot that should have been occupied by Nesta, and the goal scorer was open instead of being marked by Silva. To make matters worse both Rino and Antonini were in a position to make a play and neither reacted. All and all a comedy of defensive errors, all of them correctable, and all of them terrible, but the rest of the game was not as bad as the comments lead me to believe. Let’s be clear here a draw away from home in the CL is a ticket to the knockout stages, and while no single player was exquisite, this is a team game after all, but the formation shift and performance looked like a good building block. 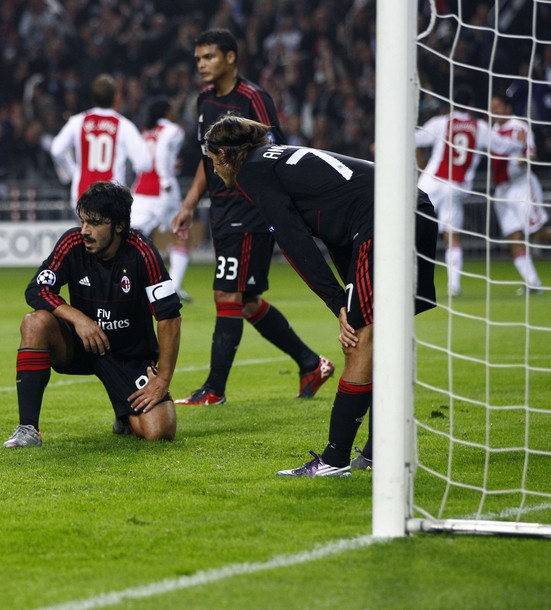 The talk for the past few days has been the formation shift of AC Milan from the counter-prone 4-3-3 into a more balanced midfield friendly 4-3-1-2. The problem with the 4-3-1-2 is at times during the match it resembled a 4-4-2 with a diamond midfield which actually helped Ajax more than it helped Milan. With the midfield moving into a diamond it gave room for Ajax to operate in the center of that diamond and then exploit the wings when Rino or Flamini had to come inside, instead of Pirlo stepping up or Seedorf helping back, in fact it was this type of play that led to the Ajax goal. On the Milan front the formation did help with passing in the midfield as Seedorf was showing for the ball closer to the making the formation more compact and allowing Milan to make shorter higher percentage passes, but possession was still wasted too often in the attacking third. The space in the attacking third was an added bonus with both Zlatan and Robinho moving into different spaces to pressure the defense, but to often that space was not exploited with any sort of pace.

All and all, the formation was better and while it didn't provide three points, it provided a bit more in terms of possession, balance, and dynamic attackers challenging the defense. Not bad for the first 90 minutes it was used, away from home and at a stadium that is historically hostile to AC Milan as some of us recalled in the comments of the match post. Allegri still has some work to do, but this is not a bad step in shaping the team into a more solid formation that works to the strengths of ALL the player's available, and not just one or two. It will be even more interesting to see how it works with Pato and Zlatan up top, as the pace and strength of the two may prove lethal. If only the summer had brought a proper CAM...

As for the some of the other performances, Flamini saw his first start and was his same pestilent self. Fortunate not to see red on his 40th minute challenge, and Allegri had seen enough by the 51st minute, anyone still harboring a belief that this guy can play every match and make a difference?? I am not. Robinho in his second start was wasteful on more than one occasion, which is ironic considering how "starved" we were for goals that management spent the whole wallet on strikers. Zlatan however scored yet again, and while it is infuriating to see him do relatively nothing otherwise, he has finished as advertised. Zambro was often burned by Suarez, and I was hoping Allegri would counter pace with pace by starting Abate but that was also not the case. Rino continues to look like a man with new legs, but even has to be getting gassed with this crowded fixture list. Seedorf was average on this day, but he and Pirlo were both responsible for the goal on a great link up. My biggest gripe with Seedorf in the CAM role on this day was to many one touch passes, he just to predictable. I like his passing, or that he sometimes change the pace of the game, or that he likes to take a snap shot, but he did none of that today. It was almost all to simple out of him, which is usually a very good thing, but when he had time or chance to shoot he just didn't read the game properly. 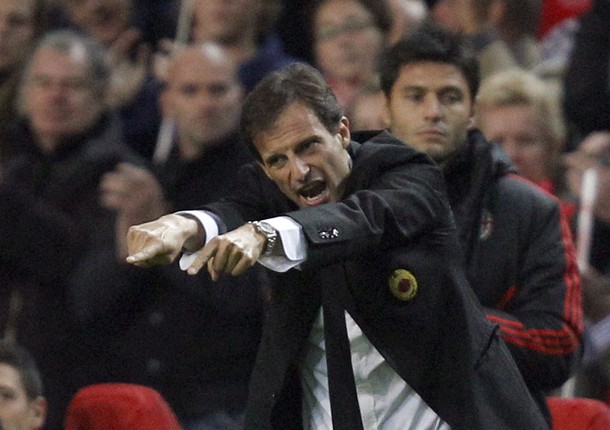 As I said earlier, a draw away from home in a CL match, is usually a good way to go. In fact if you win your home games and draw all your away games you have a pretty good chance of playing in the next stage, so we are well on our way in that sense. But there is still little to be optimistic about on a player to player basis with each and every match, the team as a whole is finally improving, but the players still look disjointed and lacking any real chemistry. Hopefully Allegri has the balls to stick to the formation and gets a solid rotation going so that players have both the confidence and comfort to succeed. Saturday against Parma should help prove that, or we just go right back to the 4-3-3 and get ready for a countering loss!?