Thank god for Thursdays, I didn’t have a chance to polish this tactics piece for Tuesday so another day of the week that starts with a T is OK by me. Really didn’t mean to rhyme there, maybe the win on the weekend has made me delirious, who knows...

My focus here is to hash out what made Allegri’s 4-3-3 from Sunday so different than Leo’s last season, which was often times porous, slow, and ineffective.

I want to start by mapping out Leo’s 4-3-3, as you can see in the diagram the ten outfield players cover a lot of space but the deployment of the formation leaves gaping holes in very attractive attacking channels for opponents. There is by no means nothing wrong with this formation, but its success depends solely on the players ability to keep their shape and to be individually talented enough, both offensively and defensively, to cover their space and quickly join into the attack.

When Leo relied on Seedorf to play the LM or RM role, he often times ended up in advance of Pirlo, forcing his opposite midfielder to cover ground behind Pirlo. So our midfield line of three, which was supposed to cover the entire field horizontally now looked like a vertical line of three creating acres of space for opponents to attack into. Throw in some marauding fullbacks and you have classic recipe for disaster. Players caught high up in the attack and opponents countering with pace and numbers leaving CB’s of any caliber at a disadvantage. 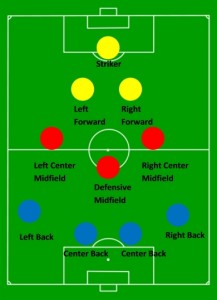 Fast forward to Allegri’s 4-3-3, the deployment of the attack was more compact centrally, but the actual playing shape of the team was more compact up the pitch as well. In classic Arrigo Sacchi fashion, Allegri wanted to make the field smaller for both his team and the opponents. This was the cornerstone of Sacchi’s Milan and appears to be the foundation that Allegri is choosing to build his Milan on. Yes, this system also requires a certain amount of tactical know-how and the ability to play quickly and more directly to maximize the number of players in the attack, but Allegri proved that this Milan is in fact capable of all those keys to success. Yes, the opponent was Lecce and often times their central midfielder players dropped so far deep that Pirlo was left wide open with acres of space, but with Milan’s new look attack, team’s will be forced to respect Ronaldinho, Pato and Ibra making that kind of space available more often than not.

The idea of a compact formation is nothing new, but if done properly can be devastating to an opponent’s tactical game plan. By moving the defense further up the pitch the moment Milan loses possession it puts every player in close proximity to the opponent allowing them to pressure the ball easily; but more importantly gives the opponent little to no space to operate or move the ball forward. Of course a good play-maker and a pacy forward can break this lack of space with a well placed killer long ball, but asking a team to make a bit of magic is far better than giving up acres of space on the defensive side of the ball! Opponents will then be forced to result to short, quick, lateral passes in which our midfielders can pounce and keep the ball well away from our goal and more often than not in the attacking third. A simple yet effective game plan that when deployed properly can have excellent results as seen here!

Simply put Allegri just added a bit of tactical know how to a classic formation to get this team firing on all cylinders. Will the desire and intensity last the entire season? I can’t quite say, but considering the fact that on the bench we have Robinho to cover Pato and Ronaldinho. Flamini, Rino and Boateng to cover in the midfield finding fresh legs and ball winners should not be a problem. If you don't want to pressure the ball and fight for the cause, there is someone else waiting to take your place young or old! Add in the fact that Milan is playing with a new found directness towards goal and a speed I have not seen them play with since I was a child, the future looks a bit brighter than first thought.

FYI: There won't be any updates until Monday or Tuesday. I am traveling to Cape Cod for a preseason soccer tournament which will make it very hard to post and the lack of news with the International break will make it all the worse. So I will leave you to your own devices, God help us all! If I can get something together before I leave it will post on the weekend.