A few months back without seeing the Serie A fixture list I made a commitment to cycle 100 miles for a Multiple Scelorisis Charity event, well that day had to unfortunately be the same day as Milan’s opener so forgive me if I am a little behind. Couple the ride with the start of the High School soccer season and my weekend got a little more hectic than I anticipated, but I watched the game last night, and got another fast forward viewing in to see if I had not in fact gone crazy from what I saw!

Before we go absolutely bonkers and anoint ourselves Serie A and CL champions, we need to put our feet back on the ground. Lecce is fresh up from Serie B, and following the second goal they looked completely demoralized. Take nothing away from the shear speed and intensity in which Milan played the first half, but I don’t think we will play another team all season who affords Pirlo or Ronaldinho so much space and in turn do not exploit the space left from shifting midfielders. However, with all that said, what Milan did in the first forty-five yesterday was absolutely fantastic. 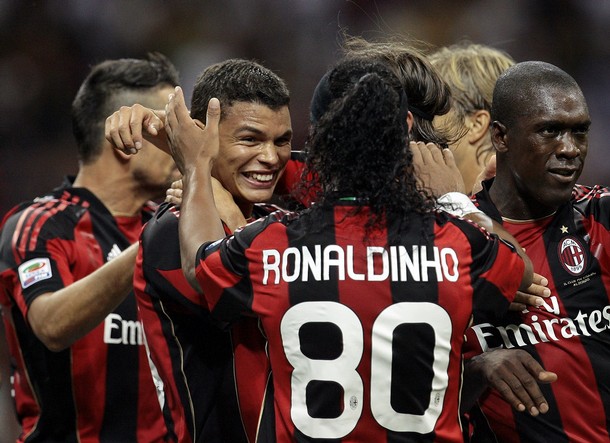 Much of last year I complained about balance and how when Seedorf was in the midfield it made us weaker on the defensive side of the ball. For Seedorf to work in that role Ronaldinho would have to track back and hold up attacks, and what did he do? Absolutely that! Ronaldinho won more balls yesterday in forty-five minutes than he did all last season. He dropped back, he harassed players in possession and he no longer looked like a player on a foosball rod, HE MOVED. His extra effort proved exactly what Milan can do when that guy is on his game. Again, granted it was Lecce, and so much time and space will probably not be a weekly occurence, but he took his chances, made his runs, and gave a minute of reprieve and consolation to the fan boys fighting so hard for his honor. Simply put, if Dinho can show that much effort game in and game out this team will in fact be extremely dangerous.

The same can actually be said for Pirlo yesterday who also looked like a man possessed. It appeared that tactically Lecce was OK leaving him with acres of space making his job easier, but also the work of Ambrosini, who could float more forward than having to stand ten to twelve yards from Pirlo. Milan absolutely dominated the midfield, and because of that Pirlo was able to make his bread and butter long raking passes wide and inside on more than one occasion. Again, as I said with Ronaldinho, I don’t expect so much time and space every week, but his touch, his vision, and movement were absolutely vintage. Sadly, I don’t have the same heaping amount of praise for Seedorf who despite working very hard seemed lost time and time again, and out of position for the rest. His movement centrally seemed to visually confuse Ronaldinho and Antonini on more than one occasion and forced Antonini to “stay home” on defense more often than not, leaving our streaking LB out of the attack, which makes you wonder what will happen when he can occupy that flank leaving Ronaldinho even more freedom to go inside?! Borriello was also dissapointing playing with the weight of the Zlatan transfer on his shoulders, and unable to score despite provided his help on the first two goals. That weight is no longer an issue as it appears Aaron of the Juve Offside will get his wish with Borriello going to Juventus on a pseudo loan deal with interest from Napoli and Liverpool as well. Why not stay and fight for a place in a crowded fixture list is beyond me!? I also don't get why we want to help out Juventus so much!?

The MOTM for me had to be Pato. I think we forgot how dangerous and special the kid can really be when he has a bit of freedom and is fully healthy. He popped up both right and center yesterday and his movement off the ball was top class forcing a wide eyed Lecce defense to bow down to his superiority. Yes he still couldn’t pass the ball if you were five yards away from him, but his running and finishing earned him high honors yesterday. 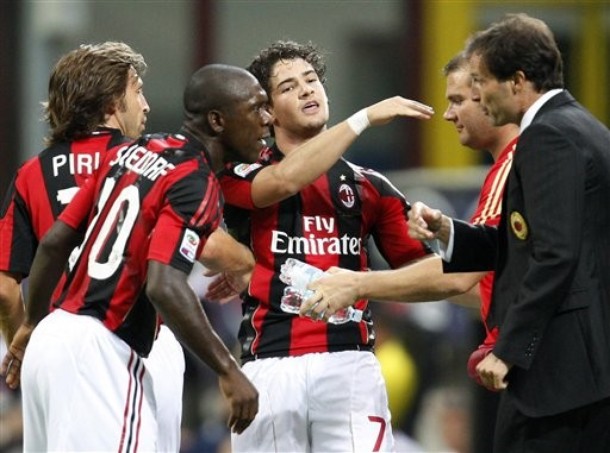 I want to talk a bit about Allegri but will save my discussion for a tactics piece on Thurdsay comparing this 4-3-3 to the one saw with Leo last season. But he needs to be commended for making this team play faster than I have ever seen them play, and play with a directness that resembled an EPL team squeezing the life out of their opponent. At first glance I wasn’t pleased with Seedorf or Bonera, but as soon as the whistle blew and everyone was flying towards the ball even Lecce looked surprised at this new pacey Milan. Not sure if that kind of intensity will last the season, but it lasted the better part of the match yesterday breaking not only Lecce’s will to play, but their resolve as well. It is a physically demanding style of play so the subs bench needs to be on notice as Boateng, Pippo, and Rino all saw time yesterday and will most likely deployed often as to make sure the team is firing on all cylinders and able to maintain such a torrid pace.

All and all, a statement game to start the season with both Juventus and Roma dropping points and Inter still to play. With a week off already it will give Allegri to fine tune his masterpiece and more importantly give Zlatan a chance to get re-acclimated with the Serie A. Word around the rumor-mill even has us linked to Robinho, but I think Zlatan is enough considering our glut of strikers and KJH still NOT on his way to Germany. Not to mention adding a tempermental Brazilian to our already tempermental Brazilian, Ronaldinho, may prove a bit of a chemistry issue seeing that Dunga used Robinho in place of Ronaldinho this World Cup. If we do in fact consider ourselves contenders following yesterday’s performance, I think a versatile back would go a long way in the depth department or even a midfielder that would prevent Allegri from having to turn to Seedorf in more defensive minded midfield matches. I will try and elaborate more on this, this week but back for sure on Thursday with a tactics piece.