Last week’s tactics piece of the same title was focused on personnel and what was needed for Allegri to implement his 4-3-1-2. This week I want to shift focus entirely away from personnel and talk nuts and bolts about how the formation works while ultimately shedding some light on this idea of a narrow 4-3-1-2.

Because this will not be a personnel discussion I will use positions to discuss the players in questions, ie RCM, CAM, LS, and so on. I want this to be less of who fits what place and more about how this formation works and how it can be successful. Allegri’s implementation of the system at Cagliari was actually pretty entertaining and it is rare that a formation committing three players to the attack can have a sense of balance behind the ball; but let’s be honest Cagliari was not the pillar of defensive prowess last season or the season before with negative goal differentials but if the formation clicks the natural play through the center of field can have its benefits on defense as well as the attack. 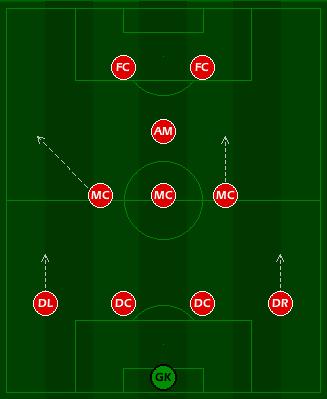 My first point is to debunk this idea of a narrow formation. This is a more narrow setup than we are used as Milan fans coming from the XMAS tree and 4-3-3, but that does not mean that there will be no width to the attack. The idea of a narrow a formation means that play will be run through the center or spine of the formation as opposed to finding wide runs and crossing the ball to the center of the 18 yard box. This works extremely well if a team has smallish strikers, who don’t necessarily have aerial prowess, and a strong CAM who can face up to goal with the ball at his feet. Play is more often to feet in and around the box and it presents a unique challenge for opposing hulking CB’s who may not have the technical ability of making the clean tackle.

Because play is run through the center it is imperative that there is a strong understanding between the defense and the CM, and to a lesser extent the LCM and RCM. Once the ball is won in the defensive stage the immediate outlet is usually to the three man midfield line, as opposed to the standard idea of finding the wing like we are used to. This is made easier because of traffic in the center of the field from the alignment of the formation will require and force opponents into wide positions to attack. This could be problematic when playing a team with strong wingers and aerial strikers, but with the general tactical trend away from target men means that teams will have to opt for that setup against Milan if they feel it will be effective. Once the midfielders are given the ball they can then choose to play laterally, amongst each other, or they can choose to find a member of the attacking trident further up the pitch.

The ideal attacking stage play would be for the CM to find a striker (RS or LS) who can then play into the feet of the CAM 20-25 meters from goal. Once that ball is played the striker then makes a cutting run either to receive the ball or create space for the other striker. This space is created by the defense choosing to respect the CAM or from confusion as to striker marking responsibilities. If done correctly one striker runs behind the defense while the other comes across making a lethal combination for the defense to deal with. If this proves effective opponents will be forced to drop midfielders behind the ball to crowd the CAM, who can then find the CM behind him into space, or adapt into a wider system of play. Because the opposing midfielders are behind the ball and deeper into their defensive third, the fullbacks can now join the attack as needed giving width when the play calls for it and in turn not sacrificing shape in the back because the opponents are forced into a defensive stage. Granted this can prove problematic if opponents counter behind the fullbacks when they get forward but the LCM and RCM should be intelligent and capable enough to cover as needed. This is the biggest difference between the 4-1-2-1-2 (diamond midfield) over the 4-3-1-2 because the wide midfielders, who are not very wide, can actually stay central and become the first of line of pressure on the ball to prevent a counter.

It can also be said that playing a more conventional two striker setup makes marking duties more difficult for defenders and will in turn force opposing fullbacks and CBs into covering positions while the midfielders are forced to get behind the ball and pressure. In essence the narrow system of plays actually funnels the opposing team into the center of park and gives space for strikers to operate and makes width all the more dangerous when the play calls for it. With a by-product of the “funneling” idea forcing the opponents to play narrow as well and therefore making it easier to defend against them if that is not their usual system of play.

As with any formation if it fires on all cylinders it will make for an intriguing brand of football, but as always the questions regarding player tactical awareness and intelligence always become a huge issue. I specifically chose not to discuss personnel because I wanted the formation to “shine” but I know full well that no formation works without proper players, and while it doesn’t always require players of World Class caliber, the formation requires players capable of fulfilling roles and responsibilities so that the sum of the parts equals a successful and superior whole. Do we need a World Class #9(RS) if the #10 (CAM) is capable enough of providing service into dangerous areas? Does the #10 have to be the best player in the park if a #6, 7 or 8 (midfielders) can distribute into intelligent spaces to shift the defense out of position? We sometimes get infatuated with individual quality while neglecting to realize that each player is linked and when functioning as a unit are far superior to any single individual talent, which is what makes a team truly dangerous!