I think we can all agree that the hiring of Allegri gave us all a chance to breathe a collective sigh of relief, but with his hiring now comes a myriad of unanswered questions regarding the team, formation and personnel. I don’t want to portray the hiring of Allegri as a negative by any means; in fact I am excited to have a young and innovative tactician at the helm to instill fresh ideas during the rebuilding of the team. My concerns are actually rooted in his system of play and the player’s available to implement the 4-3-1-2. 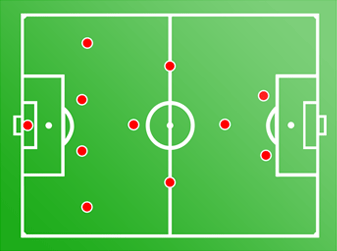 When I first look at the roster of our Club the last formation I really think of is the 4-3-1-2. The formation calls for a CAM play maker who can check into the midfield to receive the ball, turn, face play and make the pass or run that the two strikers can thrive off of. At this point outside of Seedorf there is no one who has ever really played in that role, let alone be successful. The CAM also has to have an element of grit in order to be able to stop the opposing DM or CM from having a carte blanche at the midfield line, at this point the dream #10 is Wesley Sneijder and while I have no doubt in my mind a player can found to fill that void the question becomes who and how much are Fester and Co. willing to play for such a pivotal position?

The midfield three in this formation actually operate very similarly to the midfield in Carletto's XMAS tree so in that sense we have the perfect fit, but then the issue becomes width. We can certainly count on Antonini to be a viable option next season on the right or left, he has earned that much, but the question then becomes where do we find the other back? Allegri didn't neccesarily call for that type of width at Cagliari, probably because due to lack of personnel, but offenses become exponentially more dangerous when the full backs add numbers to the attack, forcing defenders and midfielders out of position to cover their deep runs. Do we stick with Abate and all his growing pains, or will the Otamendi, Taiwo, or Eboue rumors come true? Until then it leaves another gaping hole in Allegri's potential formation!

Coaches have a tendency to stick to what they know, and while I have no doubts Allegri is banging his head on the wall much like we are, figuring out how he is going to make this work, he may have to adapt with what is available to him or the lack thereof for that matter. We all know Ronaldinho's failures behind the strikers, and when you have a team with both he and Pato, maybe the 4-3-3 is the way to go! But even that presents major problems as evidenced last season with the formation being exposed for lack of balance in the midfield whenever Seedorf was on the pitch. The team had no problem going forward but defending was a nightmare, if Allegri does choose to stick with the foundation Leo has laid down, then a LM in the form of Galloppa, Asamoah, or Lazzari is an absolute must. While some of you may argue the lack of quality in these players, it needs to be said that function is more important at this point to the balance and deployment of the formation and the well being of the team! We can all salivate as we watch players at the World Cup, but have your rational thinking cap on and understand that there is a budget here and players actually wanting to come to Milan is a thing of the past!

A 4-3-3 featuring Ants, Nesta, Silva, RB, LM, Pirlo, Ambro, Dinho, Borri, Pato has it's advantages. Abate, Rino, Flamini, and KJH can all be used to supplement and even useless players such as Mancini or Janks can even find a niche, but the weaknesses are still evident. Even if Allegri went full steam ahead in his preferred formation, and deploying Pirlo as the #10 (which I have misgivings about because of his ability for the long pass and being so close to goal) as follows: Ants, Silva, Nesta, RB, LM, Ambro, Flamini/Abate, Pirlo, Borri, Pato. It still leaves holes in the 3 man midfield and RB, and presents Old Silvio's favorite question where do you play my precious Ronaldinho? Versatility is not really our strong suit now is it?

As you can see Allegri has his work cut out for him, I am sure an assessment of his personnel has already begun but will he at least get the players he needs to make this work? You could even make a case for a promotion of De Vito and moving Antonini to RB, or playing Verdi/DiGennaro as the #10, but even then the name of the game becomes patience as the team will surely struggle with growing pains. It goes without saying I find little comfort in the fact that our management continues to chase strikers despite the position being relatively FULL on our roster, and continuing to neglect other areas of the pitch that need desperate depth, as well as starters, but at this point it has become the norm, as frustrating as it may be.

Again, I am excited for Allegri, he has some tactical guile, and can bring a desperately needed breath of fresh air to Milan's stale tactics, but I certainly wouldn't want to be in his shoes at the moment! Best of luck and welcome to the home of the AGED and INSANE.