Saturday’s match was one of those games you see late in the season in Italy where both teams could benefit from the point and the ensuing 90 minutes becomes an inept tug of war where both teams get forward but no one really sustains any type of pressure or intensity to grab the three points. Sure you may say, it’s a regular old run of the mill Milan performance, but for two teams that could really use some urgency not a single soul seemed all that interested in finding it! The only probably with this gentleman’s draw is that apparently no one told the ref and a super soft PK, and a Red Card moments later made this snooze fest a bit pressing towards the end.

I replayed the PK a few times, and really the largest offense I saw was the “dangerous” play from Koldrup, which was to play the ball (and man) while on the ground. The problem with a foul such as that one is that when it is in the box, it makes the referees job a nightmare. You can’t possibly call an indirect free kick 8 meters from goal; you could play advantage, which would have been the better option here as Milan seemed to score a clean goal seconds after the foul, but the second a ref blows the whistle in that circumstance, the ball has to go the spot, just a part of the game. 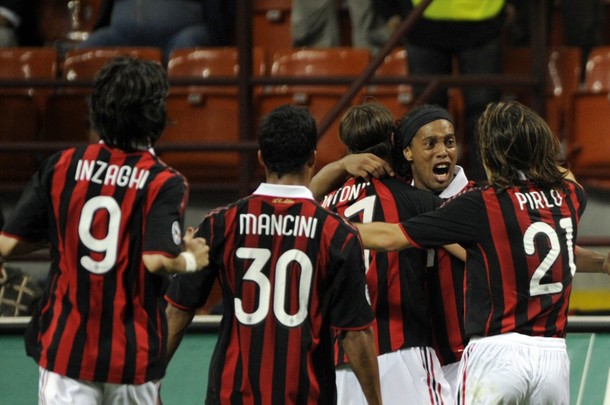 After an opening minute flurry from Fiorentina the game settled in and it was easy to see why the Viola has struggled at times this season. Lack of any real creativity going forward and for the all the hype surrounding Montolivo, he seems capable of a bad day just like his Milan counterpart Pirlo. Marchioni was actually very good, but with no real link to Jovetic from the midfield Gila was left sans service and very much alone dealing with Silva and Favalli. The same could be said for Milan as the play on the pitch was poor and lacked any real direction. At points in the first half Ambro, Antonini, Seedorf, Ronaldinho, Pirlo, and Borriello were within 10 yds of the ball, all on the left side, and as Fiorentina continued bringing bodies, not a single player could lift his head for a switch wide right. The problem with such a switch in play, even if it happened, was that there was only Zambrotta on that side to carry the ball and with KJH being his usual poor self, if either of them coughed up the ball on that flank, a very likely scenario, Fiorentina would have had carte blanche to attack that side of the field with no one in sight. 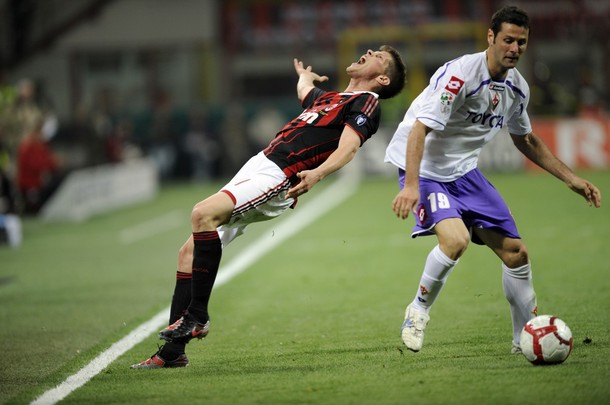 A very poor showing from a team of “old men” who should be capable of spacing and finding a way to be a bit more dynamic on the attack, maybe use Dinho as a decoy and spring Seedorf wide right, or play Pirlo, who dummies left to shift the CB’s and then finds KJH!?!? These are simple final third feints that any team should be capable of, any team except Milan apparently.

Credit has to be given to the Fiorentina defense that had a stern resolve while man marking inside the box. When in doubt Fiorentina would do what any team would do in Italy, foul when they needed to. As for getting tested by the strikers this was once again more a Milan mistake than anything else. Playing KJH wide right is a lost cause; the guy has barely shown anything in the center so asking him to play wide is a non starter. Why not give Dinho a rest and play Seedorf in the hole behind Borri and KJH? At this point we can probably jokingly say, “It is just Leo being Leo!” The fact that neither striker, hell all three strikers, seem to have little to no cohesion this late into the season is puzzling. The beauty of a three man front line is the interplay and combinations that it creates; instead Milan’s strikers seem to be on top of each other when they shouldn’t be and way too far apart when they need to be closer. This is a classic case of a coach putting players on the pitch but not giving them instructions to succeed in those positions. It worked well in the beginning but it has not “matured” with the carousel of personnel and lack of direction from the top. At least on this day we got a favorable bounce and the three points needed to book our place in the CL, qualifying round at minimum.

I want to end with a funny question on the Ambrosini red card. Favalli and Ambro were both at fault on the foul, Favalli impeded Gila while Ambro swept out his legs, so initially I thought both players were being shown yellow, but when I saw Favalli put his hands up implying that it wasn’t me, then watching Ambro get his second yellow and then a red, I have to ask, why wouldn’t Favalli gladly accept that yellow so Ambro doesn’t get a red!? Is it too harsh to ask for a teammate to “incriminate” oneself? I know what I am asking is a little bit far-fetched and unlikely, but I had to throw it out there for consideration...