Today, thankfully, I didn’t have to watch another lackluster, uninspired, and heartless performances. In fact no one did! The FIGC’s last minute decision to close the doors to the match due to a long running ultra rivalry meant that no Milan fan had to watch in person as their team continues to slide further and further into oblivion, long past mediocrity at this point, and bordering on just plain awful. Yes, thanks to the Palermo-Samp draw Milan are mathematically safe in third place, but it doesn’t excuse the players from piss poor play or Leo for just maintaining the status-quo when it degenerated weeks ago.

Today, instead, I watch Chelsea absolutely thrash Wigan for the EPL title. Carletto, for all the grief he took at the helm of this squad, has done what many thought he would do, and that is deliver the title to Stamford Bridge. While he didn’t win the CL, Chelsea’s true prize, he showed that he can in fact Coach, be flexible, work with youngsters, work through injuries, and sustain runs of good form when the team needed it most…all traits that probably would have left Milan at the top of the table this season. Instead we have lost all momentum, whatever little was left, and have only ninety minutes to see if anyone of the highly touted youngsters is worth his salt. Once again the Rossoneri has repeated mistakes of the past few seasons, lacking an eye for the future while floundering in the present, and always remembering the past. Those traits are never a recipe for success, considering that traits like adapting and evolving all seem to be the keys for the teams at the top of their league tables.

As for the game itself a free header from Sculli, was the nail in the coffin, puzzling considering the last time these two teams met Milan had an offensive outburst, sans Pato to boot. All the same quotes were thrown about the comments and past match reports, poor finishing, poor passing, just about poor everything. Seeing the goal was even more annoying because Sculli basically went unmarked and while any number of players could be blamed, it appeared to be Borriello’s man, which is frustrating because his defensive abilities are the one thing he does do well, and on a day where his finishing boots were back in Milan along with KJH’s, at least do some dirty work in the box. 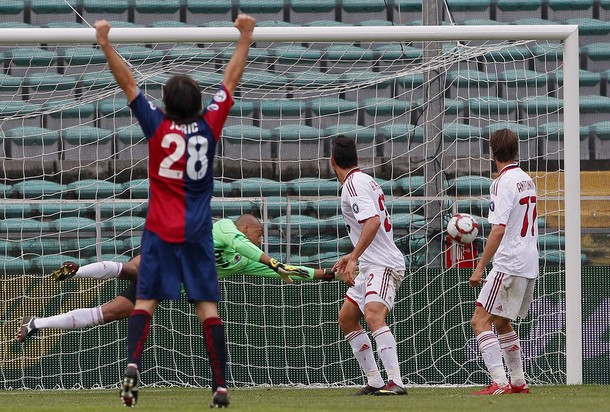 Substitutions yet again did little, and a Flamini red card in the 85th minute all but sealed the three points for Genoa. I have to admit the string of red cards has been extremely frustrating and the lack of discipline on the pitch is poor. This often times boils down to frustrations, but top to bottom taking silly expulsions: straight reds or two yellows, is never the mark of a strong a team. An apparent injury to Antonini early in the second half is icing on the cake and with few fit backliners left maybe Leo can finally pull the trigger on a primavera defender. The rest of what I could say is merely going to sound like a broken record, and while I waver at times between hope and despair this is one of those hopeless moments. I read this week that MVB was linked to the bench job and while I have the utmost respect for Van Basten and his time at Milan, I can’t help but bury my face in my hands at the thought of this personnel list at the hands of a man who knows little if anything about defense, in a league built on the idea of keeping a “clean sheet.” Bad move? I think so… 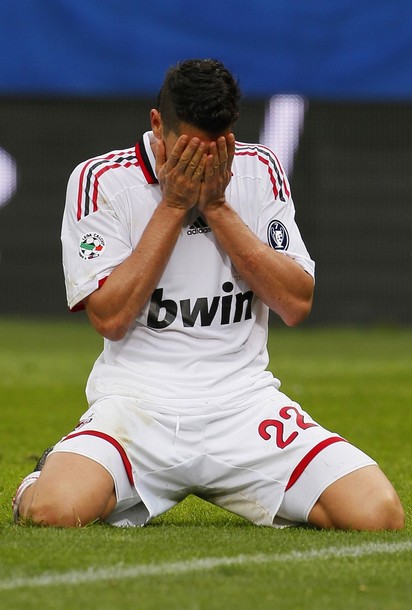 So forgive me if I appear hopeless, but how can I maintain hope for a better Club next season when the brass can’t even address and prioritize the problems at hand? New Coach, new players, new tactics, new formations, and new game-plan….all points needing to be addressed…but instead we are fighting for the signatures of 15 year-olds who will never be given a fighting chance to prove themselves and chasing Coaches who couldn’t be a worse fit. Not even the idea of, “There is always next year” can bring me comfort at this point.