The red card to Bonera was a bizarre catalyst. I often joke that when KJH is on the pitch it appears we are reduced to ten men, so Milan should be used to it at this point. For the first time in weeks I saw urgency! The problem is that such a massive expenditure of energy and aggression came while being down a man, and in fact true to form that 20 minute push between the 60th and 80th minute came up empty, and arguably cost us the match in the dying minutes.

When a CB goes off most teams and coaches will swap a striker, replace the CB and play 8 men behind the ball hoping to knick a goal on the counter. It is important to remember the injury to Ambro caused Leo to burn a sub, wisely enough, moving Abate to RM and Zambro to RB. I mentioned in my preview how catastrophic an injury to a mid would be in this match with no real sub on the bench, and my nightmare came true! So Leo instead of turning to Albertazzi following the red decided to sub in Oddo for Mancini and move Zambro to CB. It was with this move that the entire shape of the formation went to absolute shit. So much so that even Dinho made a couple of fruitful cameos on the defensive side of the ball, proving not only that he is capable, but that he can actually be successful tracking back. 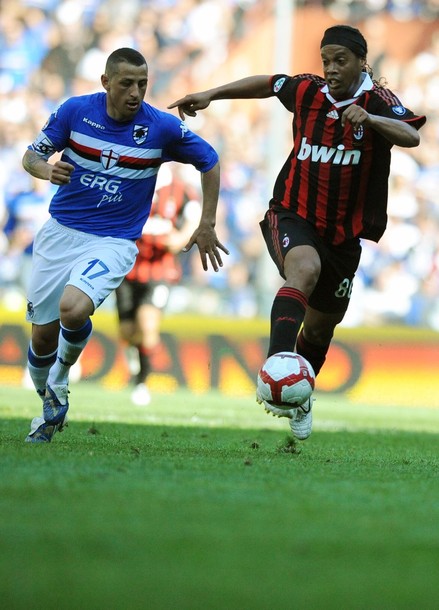 While the shape of the team went downhill fast, the shear chaos of the moment created space in the center channels that was exploited on more than one occasion by Ronaldinho, Borriello, Seedorf, and Rino. Three very good chances were wasted and at that point you had to begin to feel that Samp had weathered the storm and that Milan was surely going to pay. The shape of the defense was never restored, Samp had acres of space to operate between our midfield and defense, and Abate completely disappeared when his pace was needed most. Samp began to press and exploit space, and a fantastic combination, finished by a class header from Pazzini in the dying minutes was all it took, game, set, match and hello dog-fight for third place. 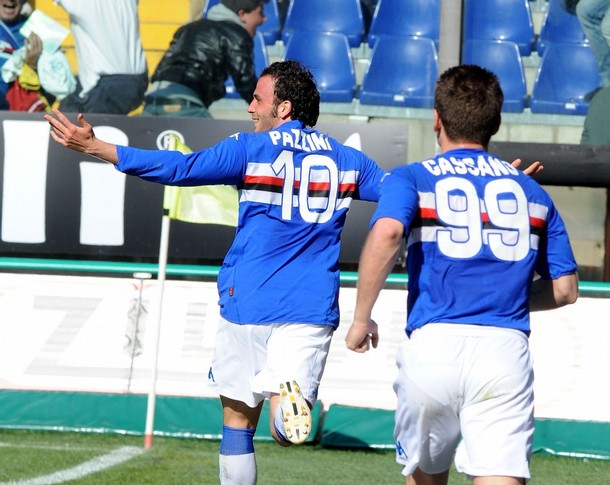 Part of me wished that Dida, who was aptly, nicknamed “Calamity Dida” by the announcer, borrowing the pet name for Portsmouth and England International David “Calamity” James, had pissed the game away. At least if Dida’s blunder had knocked gone in it would have been all his fault and we were not left with five minutes of anxious hope that maybe a point was still in the cards. Such a catastrophic error would have sent a crystal clear message that the squad needs changing and between Oddo, Dida, and Mancini, all guilty of massive errors, we all know what needs to happen, but I am not sure if the message got through to the thick skulled Galliani and company.

It wasn’t exactly a bad match before the red card. Milan looked poised to attack through the middle and on the right with some success, using Ronaldinho more as a decoy and finding him only when a switch from the right was a in the best interest of the attack. The problem was Mancini was not up to the task and consistent and strong overlaps by Abate were not used and in turn Samp was able to exploit the space left behind Abate with both Cassano and Guberti. For the first time in a long time Milan found a goal against the run of play, and Borriello buried a very strong header. I am sure Borriello will get lambasted yet again, but it would be foolish to do so. On a day were his work rate was STELLAR and his movement was creating chance after chance, I am sure fans will continue to lack appreciation for the performance. Yes he missed chances; the one in the 68th minute is still burned in my mind, but find me a striker than doesn’t miss chances!? His pass to Mancini after shaking Storari should have been a sure goal, and had it been KJH or Pippo that ball would have surely run out of bounds, but I will stop there and let his play on the day speak for itself.

I didn’t expect a win today, not with the injuries and suspensions, but a draw would have been a fair result. We spoke ad nauseam about the possible inclusion of youth in this match, and while some may argue the game was too “important” or “nervy” to throw on a youth team player, I have to politely disagree. It is matches like this one that can tell you a lot about a player’s mental fortitude, psyche and how they deal with pressure. I am not going to sit here and say that using Albertazzi instead of Oddo would have saved the match today, but even if the result had been exactly the same, would Albertazzi been scarred for life? I don’t think so, but could he have had the pace to maybe throw Pazzini off his run, we will never know. So on this day Leo chose to die by Oddo, instead of the chance to maybe live in the future for even a fleeting second.