Congratulations are in Order

Share All sharing options for: Congratulations are in Order

I want to take this opportunity to congratulate the Primavera team for winning the TIM Cup, which is the youth Coppa Italia. I want to congratulate the Coach, Giovanni Stroppa, for doing a fine job with the team but also and more importantly the players. Milan, of late, has not been a place friendly to primavera players; endless loan spells, no real shots at the first team, and regularly underachieving squads of supposedly promising talent. Finally it seems at this moment, the Club has gotten it right, and for the first time in a long time I can look at the Primavera roster and have a small glimmer hope that maybe, just maybe, the future of this Club can be built around a youth team core, so prevalent and important to successful AC Milan teams of the past. 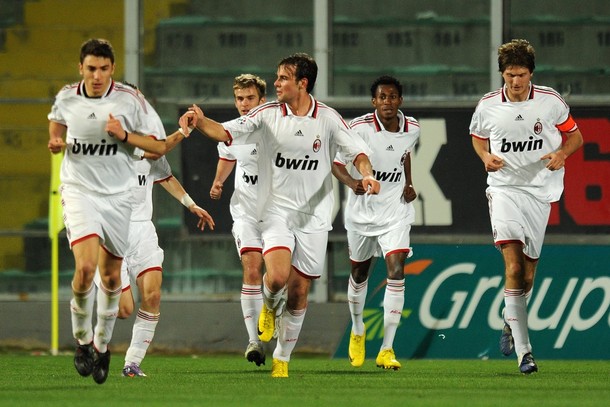 To further my previous statement, the last time Milan won this prestigious trophy, 25 years ago. With a team then consisting of oddly enough Maldini, Costacurta, and Stroppa himself, all players who went on to have memorable AC Milan careers in their own right! If you look at the roster that lifted the trophy yesterday playing in the admirable 4-4-2 diamond pseudo 4-3-3 in attacking phases: Perucchini, Ghirighelli, Romangoli, Albertazzi, De Vito, Novinic, Strasser, Scampini, Verdi, Schenetti, and Zigoni. If just three of the players can make an impact like their historical counterparts then maybe the revival of AC Milan is on the right track. 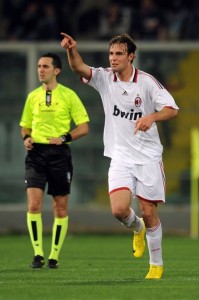 The game itself was strong; they defeated Palermo 2-0 and won the tie on aggregate 3-1. The immediate thing that jumped out at me was the link up of Verdi and Zigoni, responsible for both goals, and as I watch the current first team strikers bumble around like idiots, I can’t help but wonder if one of those guys couldn’t provide a little spark! What was also promising was defense, conceding only one goal and keeping Palermo for much of the tie. Credit to the keeper Perucchini who the Club as a whole seems to believe in but more importantly Albertazzi who can have a real impact in the first team next season and De Vito, who impressed me in the Coppa Italia and continues to be stalwart for the Primavera as well as a consideration for the U19 National team along with Zigoni and Albertazzi.

So while it is truly promising that the Primavera has found some success, I guess now we need to take a realistic look at how and who can contribute next season. First and foremost I have to advocate for the use of De Vito and Albertazzi, while I have no delusions of starting roles for these players, having them train with the first team and keeping them available instead of the likes of Oddo, Zambro, and Kaladze can’t be argued. At least with the youngsters there is a return on investment and a chance to really push them along. In the attack I have say Zigoni must be brought up. He played already briefly in the first team but size and build go a long way and the kid has both. While everyone is high on Verdi, exciting and confident player to watch, I feel like he would be blown away by a proper CB and more time developing and more importantly GROWING is a must. Paloschi has filled out tremendously and bringing him back home to mix in with Borri and Zigoni should become a priority.

Finally I want to talk about Strasser. While I had high hopes for the man they call Rodney, I have yet to see him do anything impressive enough to wrestle a midfield spot, even a bench one. He lacks identity, at least to me, as a midfielder and in the few times I have seen him play I can’t pin him as an attacking mid, defensive mid, or out and out box to box mid. As harsh as this may sound, and I know my chances of seeing have been limited, but he doesn’t seem to do anything all that well. This is most likely a product of nerves and lack of comfort, but if you’re a kid getting a chance in the first team come out and make a GREAT tackle, show some grit and let the Coach now you are willing to work, if I see that, then I will easily have my faith restored.

Bottom line, seeing the kids win is really exciting. It gives a bit of foundation to the team and makes the transfer market a bit more manageable for the incompetent Brass in charge. The real question though falls to Leo this weekend, do you catch lightening in a bottle and reward some of these kids with a trip to Genoa this weekend to play Samp, or do we keep the status quo and watch Huntelaar and Mancini bring absolute SHIT to the table. For me the choice is easy, IT CAN’T POSSIBLY GET ANY WORSE…but again I can't speak for Leo and many of you…