Share All sharing options for: A Defeating Draw: Milan 2 Catania 2

When I saw Leo’s starting eleven today I couldn’t help but draw on the old insanity adage. They say the true definition of insanity is doing the same and expecting a different result, clearly Leo has to get his head checked out. Last week he rolled out this starting eleven that lacked in the department of balance and pace, and they conceded two goals rather easily, this week he started the lineup and somehow expected a different result!? 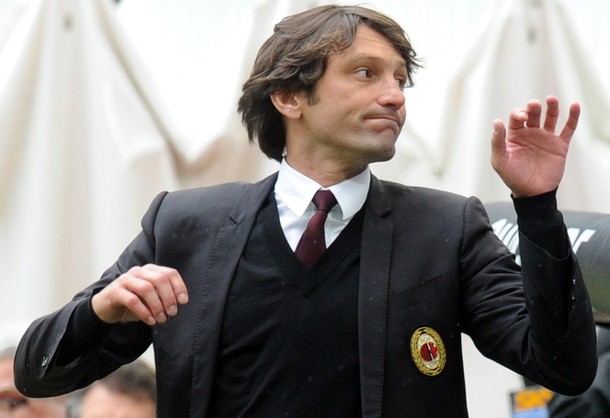 My immediate reaction was that Leo has conceded to the fact that this team must attack to compete, but the issue continues to be conceding, and on this day it was before than the usual immediately after. The second Catania goal sums it all up, KJH disposseseed, Mascara runs unmolested for forty meters, no midfielders recover, Lopez hits a cross, Dida is glued to his line and opponents are allowed to run directly on goal, with defenders few and far between. Quite a comedy of errors that is becoming commonplace on the pitch for the Rossoneri. No intensity no recovery and an endless mess of confusion with players staring blankly at each other following poor play after poor play.

For all the good Leo has achieved this season, it has become apparent that the Milan we saw leading up to and coming out of the winter break was clearly “punching above its weight.” It was a team firing on all cylinders and exceeding expectations. But a threadbare roster, and players not living up to their billing, it was only a matter of time before Leo’s lack of real footballing knowledge shone through. He seemed to galvanize the squad at half-time, and I would love to hear what he had to say, but the lack of a real game plan at the outset of the match and no real adjustments during the course of the game shows that Leo still has a lot to learn.

As for performances, it really seemed to be a different team immediately at the start of the half. Pirlo a raking ball to Seedorf over to Marco who finished rather nicely after a combination of headers. For all the flack the midfield maestro, Pirlo, has been taking as of late, he played well on a day where he didn’t have his usual duel DM support crew. Seedorf also had an admirable first half, but his work rate on both sides of the ball is desperately lacking and left Ambrosini with the impossible task of holding counters and starting them, and the two goals conceded were partly thanks to this. Borriello erased a poor first half, but seeing that the game is 90 minutes long, playing only 45 of them at a high level is not good enough. It is certainly 45 minutes more than effort than his “strike partner” KJH decided to chip in on this day. It was apparent immedialty the difference Pippo caused to the Catania defense, that the Dutchmen could not manage. 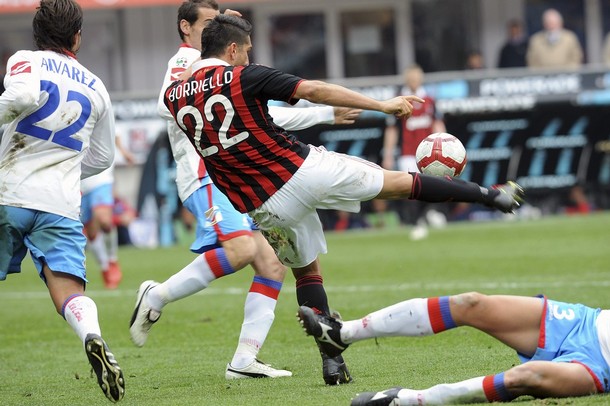 For much of the season Ronaldinho has been given a free pass as he has been instrumental to the Milan attack, but as the season has worn on his contribution has faded and his effort has followed. Considering that the team is literally built around the Brazilian, on day where he was easily one of the worst players on the pitch the team surely suffered. He constantly attempted to complicate matters with “flashy play” and the idea of playing simple and keeping possession being one and two goals down was lost on him. Early in the season I though he had regained some of the form that made him so special, but instead it may have just been a brief flash of what was. If the team must move forward, serious consideration needs to be given if this idea of Ronaldinho-centric 4-3-3 and if continues to be the way to go?
.
Defensively the squad regained some shape in the second half, but there is little to be said when injuries have made picking the back four a crap shoot, and it doesn't help that they are cconstantly defending counters with numbers down. Seeing Favalli go off with what appeared to be an injury and replacing him with Flamini, and moving Ambro into a pseudo CB is all that needs to be said about the state of this defense. It certainly doesn’t help they have had to deal with three keepers behind them, and Dida who appears cemented inside the six yard box, doesn’t do much to offer support behind the back four.

On a day where our miniscule slimmer of hope at a title was effectively crushed, and our hope of maintaining third place looks even more precarious, forgive me for not finding a positive in this draw. With the schedule as difficult as it is, and the looming suspensions of Silva and Pirlo for the next match, it seems that a situation that couldn’t possibly get any worse continues to find a way to spiral further and further down. Congratulations to Roma for seizing an opportunity presented to them, a task that Milan could not do this year on numerous occasions, I hope that Ranieri finally earns what he deserves, and a trip to the National team soon thereafter.