Share All sharing options for: AS Dominos 0 AC Milan 0

Eleven minutes in the first half, that’s it, ELEVEN minutes, was all that Roma could muster for a sustained attack. In those eleven minutes Milan defended, cleared in sloppy fashion, and let Roma have far to much possession, allowing them a confidence and foothold in this match that was unwarranted considering what happened next. For the next eighty-nine minutes and change the Rossoneri dominated all but one facet of the match, finishing. To bad really, because with chances coming fast and furious in the second half, this game could have gotten out of hand quickly, and made a statement to everyone watching, but more so to Inter and ManYoo.

Claudio Ranieri, did exactly as I had discussed in my preview, the guy played a ruthlessly organized set of tactics with the sole goal of netting some points from the match, a feat that they should be extremely pleased with. The casual fanboy will hem and haw about not going for the win at home, but that same fan should be banned from watching CL matches when Ranieri’s pragmatic, results first approach, punches your ticket to the CL, but for tacticians, this day belonged to Leo. The bold move to use the personnel at hand and play a 4-3-1-2 hit a rough patch early, but once Ronaldinho found his way into the match, and Borri and KJH, realized they could in fact play together, space opened up nicely and even Ants and Bonera/Abate got into the act going forward. So instead of getting rewarded with at least a two nil win and the faith in a new system, Leo must be shaking his head the same way as many of us, when a team very capable of finding of the back of the net goes cold so inexplicably fast!? 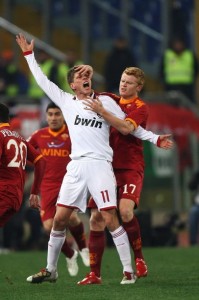 Credit has to be given to KJH for his efforts today, and while the discussion of him over Borri has been ever present on this blog, today we saw the reason why. KJH’s play style begs for a two striker system where he can do less and provide more. The 4-3-3 requires more than just attacking, while today’s formation just let him be himself, and it worked nicely. Often times he and Borri interchanged nicely, but it seemed that by the time Milan had figured out that Roma posed little to no resistance to the flanks defensively, our strikers’ had already lost the confidence needed to bury one. Leo did well to introduce Pippo, but that move needed to be done in the sixtieth or seventieth minute for him to pose a real problem.

The MOTM had to be Flamini, and if he doesn’t start Wednesday at OT, I will lose my mind. He was everywhere, and tackling like a beast. When the little Frenchman realized the strikers weren’t scoring, he said I will shoot and get forward, when Bonera couldn’t get forward to cross, Flamini did it for him. The man deserves his chance and this day proved it through and through. Just imagine a 4-3-3 with three Flamini’s, this day’s of course, running in the midfield! That team would be tireless and nuisance to play against and I like it! Here is hoping to the same spark plug in a few days. 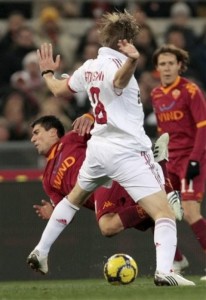 There was some good that came from this match: Ants got 60 plus minutes under his belt, Flamini proved his worth, and the defense looked strong, but rest for Pirlo, Dinho, and Bonera was just not in the cards, and thankfully the match was Saturday giving them an extra day of rest that should be used to its fullest today prior to the departure for Manchester. Sure an emphatic win would have been nice today, but the performance (outside of the strikers) spoke for itself, and the trip to OT is looming, the old say "no rest for the weary," applies even to the Rossoneri tifosi these days.

One last thing, if you didn’t get the title, this video should help. Just change the lyric “girls” to your choice of the following Roma, Pizzaro, and especially Luca Toni…enjoy the jam…