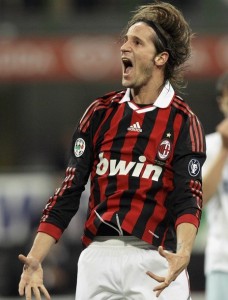 It was in the 53rd minute when Antonini pinched a Lazio pass out of the back, cut to his right and drilled a shot off the crossbar, which sealed this team’s fate for me in this match and on the season. Overdramatic, maybe, but hear me out. Apart from that shot being inches away from a magical moment, it was Antonini’s aggression and reaction to wave his arms and rile up the crowd that lit the proverbial light bulb and showed me what this team is missing, EMOTION.

I have been critical at times of DDR, and while I have no reason to defend or praise him at this moment, I can certainly respect his love for the Club which he showed after scoring against Inter. It was this passion and intensity, which you can’t “buy.” Instead this passion is grown and nurtured and a player then plays for the Club that brought him to where he is today. So if you believe that mercenaries who claim love for Milan to get paid are the answer, then I have a bridge for sale in Brooklyn on the cheap! This team needs an overhaul and it has to start from within, so in a game like this one where a little a bit of passion will go a long way, we won’t lose before we even get on the pitch.

Back to the game, while the performance was subpar, I have to admit that it was better than expected. If pundits were to be believed, the Milan we were supposed to see would be incapable of passing or any form of creativity or movement, how can a team so dependent on Pirlo and Dinho even take the field!? I for one felt that they did OK, other than being toothless yet again in front of goal, the midfield did well, the flanks attacked and chances were created. Sure the first twenty minutes or so were all played to the left flank, as though the team forgot that Ronaldinho was holding his child in the stands with Paolo Maldini and not playing LW, but once they started to switch play and find Seedorf to feet in and around the eighteen the team looked capable to some extent. An interesting consideration if one believes selling Pirlo and Dinho is the way towards the future…

Dida was a nightmare, miscommunication, mistiming, and just plain incapable of a clean catch. It was a small miracle that Lazio didn’t capitalize on one of the many errors. It was ironic however that a poor defensive clearance from one of the day’s better players was the deciding factor. Antonini has been very good and at this point one can safely say he MUST be part of future plans, as he played both left and right well and showed a lot of passion. Along with Flamini they have both really come into their own as future players for this team. One could argue that with two Lazio players dropping back Antonini needed assistance, but the real gripe for me has to be on Dida who was glued to his line instead of challenging a ball in an area he has to command.

From a tactical standpoint it is evident that Leo still has a lot to learn, in a match were some tactical know-how needed to be applied in order to prepare the players for the lack of "passing and creativity" this was once again not the case. Would it kill him to practice some combo's in training to use Abate's speed in combo passes to exploit the LB!? Is it to much ask to play Borri to the feet and then back out to Seedorf for a shot!? I also don't understand how a team so full of "experience" can't posses the ball for those five to ten minutes following a goal, minutes so crucial to any team's chances at a victory. He will learn, no doubt in my mind, but he needs to bear some of the brunt of the blame.

So here we stand, only a week ago, we had a chance to overtake Inter, now we are looking at a fight for third place as two teams far more organized tactically, thanks to Ranieri (who many were claiming poor only a few weeks back) and Jose, to fight it out for the title. If it wasn't for matches against Palermo, Juventus, and Fiorentina I would retain some hope, if we didn't have to play Catania, the same Catania who scalped Inter, I would retain some hope, but at this point my realist nature is in full force and third place ain't all that bad when I was expecting 10-13th...right?