It’s funny, in the preview I discussed the idea of playing youth over experience, and the comments were mixed. One would believe a game of this magnitude, a game that begged for leadership and a strong sense of determination, a game in which three points would take Milan to first place, one would think experience is key?? Instead the Milan experience showed its age instead of its guile, there was no sense of urgency, no sense of determination, and at times there was a no real look of care or concern. On Saturday I watched an Arsenal team in the same position as Milan, three points put them top of the table, even if just for twenty four hours; what I saw was an Arsenal team with grit and desire even a man down they continued to fight until the last minute. A performance Milan should have studied, taken to heart, and duplicated; instead of showing Serie A this team means business, they showed once again that they are merely pretenders to the throne.

Let’s put this into perspective for a moment, this game was by no means a “victory”, three points was the goal, and that goal was not attained. You can say a tie is a better than a loss, and with that I can’t argue, but on a day that called for some resilience and the push for a win the “World of Experience” this Club touts proved useless. The defensive line with an average age above 32, proved too slow, and it was the inclusion of Antonini that seemed to solidify the back with some pace. For those who think we can’t move on with Luca on either the right or left, today was the today he made a solid case. The mere fact that the Napoli goal was a by-product of stupidity furthers the need and cries for defensive reinforcements, and the fact that Abbiati got up un-injured is almost a fair trade off to give up the goal, sad but true. 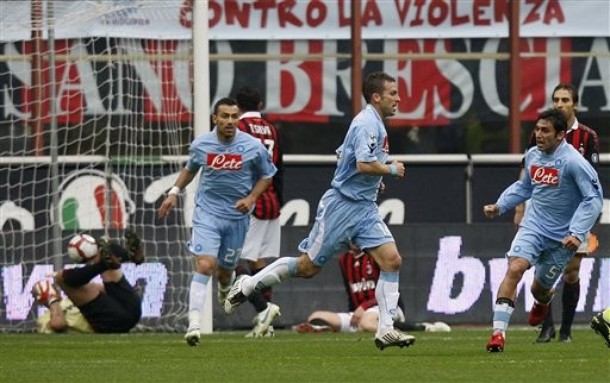 It also needs to be said that Leo had a half stack to play with today, injuries created a make shift line up that lacked pace, balance and chemistry. Having Seedorf on the pitch is OK going forward, but he was inconsistent, and if was not for a MOTM performance out of Flamini, Napoli may have been able to expose the midfield a bit more. My only gripe with the Frenchman is he has to get a yellow every game, it’s all well and good here and there to take a yellow, but even Rino learned to be more cautious and Flamini needs to do the same. Pippo was a close second in terms of a gritty performance and the goal was perfect, but he can not duplicate performances such as this, but he MUST surpass KJH in the depth chart with the end of the season coming closer. Pato’s injury, whatever it may be at this point, was devastating, and I am curious as to why Mancini was chosen instead of Abate, or why Leo didn’t take a chance at moving Seedorf wide right and bringing Gattuso on to help counter Napoli’s attack? Either move would have made more sense considering the magnitude of the match, and the historical performance of the others over Mancini? Mancini has value, but to play him was a disservice to the team and the player, and his “rustiness” proved decisive as he missed a sitter on a ball from Clarence, which leads me to my final point.

There is a growing paranoia that our strikers are “snake bitten” and are now unable to score, while I don’t buy into such superstitious banter, I am curious as to what is going on exactly and today’s game helped explain it a bit. Chances on net are not exactly the best, in fact the lead up play to goal and around the eighteen is erratic, it is not free flowing or even gradual in it’s build up. In fact it is the opposite; it is herky jerky and reminds of a sixteen year old trying to learn to drive his first five speed, lots of motion with little to no forward progress! It is his lack of rhythm that I find troubling for our strikers, and for any strikers for that matter, sure you can say that strikers should be ready and sharp, but with no one really getting an extended run of playing time, and the chemistry being all but nonexistent, this striker issue is much a fault of the team as it is the players. If you can re-watch Inzaghi’s chances today, consider my little rant, and you will notice that even a prolific fox in the box striker looks shocked to find the ball at his feet sometimes…not good…

All is not lost, and while this draw is a setback, it all has to be brought back into perspective. The season is not over, there are still many games to be played, and both teams will have their chances, the problem is the closer to the end of the season, the more these missed opportunities hurt, so if this team is serious this entire squad needs a proverbial gut check. The old men were given their chance today and proved they couldn’t get their “motor running” for a game of this magnitude, so maybe they don’t get another chance, maybe they do, but the bottom line is whoever is on the pitch has to step up and fight for the cause if not they are not worthy of the team now or in the future making Leo's summer choices easier.