Share All sharing options for: The Great Dzeko Debate

Without a midweek fixture I thought I would explore a hot topic in comments throughout the season. Before we start this debate I want to lay out some unalienable truths:

1. Leo’s preferred formation is the 4-3-3, and while the personnel doesn’t always fit the bill, and he has had to dabble in the 4-3-1-2, the longest stretches of this team’s success this season have been with a three man front line.

2. Ronaldinho for all intents and purposes is a Rossoneri player. While I can’t say I am the World’s biggest fan of the Brazilian, many of you are, rightfully so, and he has certainly earned a place in my mind as a valuable asset to this team, and possibly in the near future. His success has been a direct correlation to the first truth discussed, and has proved most dangerous high up the pitch and on the left, both as a creator and a goal scorer. This was his preferred place when he was on top of the World, and if success is expected this is where he needs to play. He played behind two strikers on more than a few occasions, but even then he failed to be truly involved or be nearly as lethal as he is on the outside.

3. Links directly back to number one, but has to do with personnel. The 4-3-3 requires versatility, and a good team has this in droves, and usually coupled with depth. Players like Abate and Flamini are pivotal to this type of formation as they can play in a few positions and give Leo choices with subs. This formation is far less effective when players have very specific roles and are incapable of doing others.

So with that all said, we can behind to discuss the “great” Edin Dzeko, and I can dissect why such a move would be bad choice. Even if Mr. Dzeko could be had for around 15M, this would be money spent poorly, when a team begs for depth, to spend a large portion of the transfer war chest on one player, regardless of who he is, is never a good choice. Outside back depth and midfielders who can run a full ninety are far more important at this point, and this doesn’t even begin to consider the need for CB depth. Let’s say you can envision a Onyewu/Silva duo at CB for the future, it still doesn’t give you a backup for either of those guys, sure we can bring back Astori, Darmian, or Albertazzi, and use De Vito next season as well, but even then proven depth is slim to none. For a team whose historical foundation was a solid defense, this is not really the way to build a contender now and in the future. Buy three players at fifteen million, instead of just one. 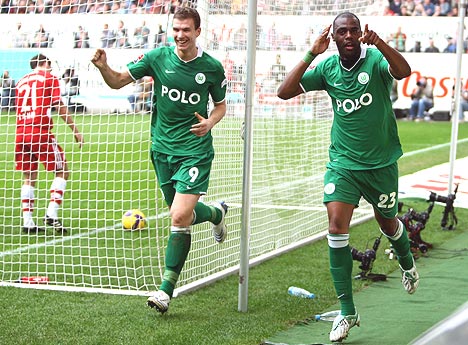 Wolfsburg, where Dzeko has made his name, is a team nestled nicely in the Bundesliga, a league that is not known for its defensive strengths, with results often totaling 3-6 goals per match, a big difference from the tactically defensive mindset of Serie A. Wolfsburg is also a team featuring a very potent attack thanks to the striker partnership of Dzeko, and his Brazilian teammate Grafite. Together they make a great combination, and often feed off each other’s will to score, great combination play, and the fact that they are both potent figures in the eighteen yard box. Sadly, this partnership is not always the case with the Rossoneri, instead the attacking balance and depth is brought from the wings, and then channeled inside and back out through combination play with the CF in the three man attacking line. This position is not for all strikers, and even KJH, a “prolific scorer (sarcasm)” in his own right, found out how labor intensive and ultimately thankless this role can be. The prototype man for a job like this is Carlos Tevez, but others such as Didier Drogba or even Eto, could do the dirty work needed to fill that position. For all the grief Borriello has gotten he has proved willing to do the work, and the success has come, but the consistency has not. It would be very risky for Milan to make an investment on a player that may not fit the bill, a player so successful in a very different role, and may in turn give us the priciest substitute strikers in all of Europe, while our team needs so much more.

Finally, I have to point out the media machine surrounding the player. I don’t like it when the media dictates the next “big thing” in football. It happened to some extent with KJH when he was tearing up the Dutch League, and he didn’t exactly live up to all the hype. Milan has always done much better when the players they were coveting were a bit under the radar and out of the spotlight. Sheva and Kaka are prime examples, both of them having amazing careers in the red and black.

I would much rather trust in the way business used to be done, then the new world order of Real Madrid and Man City buying supposed "World Class" talent. While I take nothing away from Dzeko, and wish his career the best of luck, I don’t think his pursuit or purchase is in the best interest, need, or fiscal future of our Club, and I can’t help but feel Leo and company, and many of you feel the same way.

Note: This was written Sunday March 7, 2010, three days before the trip to OT, my opinion on the topic has not changed