It's been a while, but when something like this comes around I can't pass it up. Channel 4 has inducted our Legend into their Hall of Fame and this is their write up... 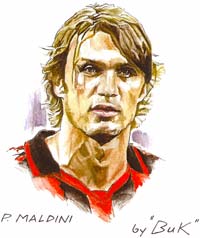 Paolo Maldini is the man the rest of the world envies Italian football for. The English Premiership may dominate the Champions League, the Bundesliga might get bumper crowds and La Liga can claim to be the breeding ground of the European champions at club and international level. But none of them has got a player like the Milan legend.

In Italy they call them predestinati – players who seem certain to achieve greatness the moment they step out on to a football field. It describes nobody better than the man who started out at the highest level as a teenager and never let his standards slip for a moment. He was, quite simply, the epitome of excellence.

He came from outstanding footballing stock, of course. Father Cesare was a hugely successful player himself and something of an institution at San Siro. However, a prominent parent is no guarantee of glory. Indeed, the sporting world is littered with young talents who have been weighed down by the burden of a famous surname. Go and ask Diego Maradona junior.

If anything, however, Paolo has gone on to surpass Maldini senior. The official Milan website lists his personal prize haul as seven Scudetti, five Champions Leagues, one FIFA World Club Cup, two Intercontinental Cups, five European Super Cups, one Coppa Italia and five Italian Super Cups. You have to pause for breath just to read it out loud.

It all began in January 1985, another world away. The Rossoneri were far from world beaters when they gave the 16-year-old talent his debut against Udinese. The club had only just recovered from two spells in Serie B and was in search of a new and winning identity. The fresh-faced No 3 proved to be an essential part of that rebuilding process. “I played OK as I remember so it was a good day,” he recalled in one interview about his debut. “But everything was so new for me I doubt I knew who my opponent was.”

Maldini made just one appearance in that first season but from then on he became a fixture in the Milan set-up. Although the club went out and bought the very best in Europe they never found anyone who came close to ousting young Paolo from the side. Indeed, the suspicion was that the Rossoneri team sheet had his name printed on it before the Coach even got to take a look.

It was not just what he achieved that was so impressive, it was the manner in which he conducted himself. Whether at full-back or in the centre of defence he never seemed to get flustered and always performed at an elite level. There have been few footballers who looked so assured on the ball, so composed in the tackle and so athletic when powering forward. Every team he played in seemed to gain in confidence when they saw him in their ranks. His long-time President, Silvio Berlusconi, knew he had found an extraordinary player.

“Paolo Maldini has been like a son to me,” he said. “Along with Franco Baresi he is the greatest player in my time at Milan. It will be hard to match what he has achieved. He was a perfect example of how Milan should be and all the fans can hardly believe he won’t be playing next season.”

He was also an institution for his country. Between 1988 and 2002 he collected 126 caps for his nation – 74 of them as captain – and starred in four World Cups. It speaks volumes about the success he enjoyed that the only real negative note was that he never won a major competition with Club Italia. The closest he came was at USA ’94 when the Azzurri lost out on penalties to Brazil and then at Euro 2000 where they suffered the agony of Golden Goal defeat by France.

Despite the lack of silverware, however, his teammates knew he was something special. “There are good players and there are great players,” commented Alex Del Piero. “And then there are players who go beyond even those definitions – and Paolo is the perfect example of that.”

He made his last appearance in the Italian set-up at the World Cup in South Korea and Japan. There were numerous overtures made to get him to return but he decided, understandably, he had little more to prove. The Azzurri never quite found his likes again and he settled into an elder statesman’s role with the Rossoneri.

“It is an honour to play alongside a player like Maldini,” said teammate Philippe Senderos, summing up how the current generation felt about him. “He is the history of Milan and has represented the club for years. It will be hard once he has gone, to play without him.

“In the dressing room and beyond he is the player who has taken the reputation of Milan around the world,” continued the former Arsenal defender. “He is a great player and at his age he remains hungry for success. Everyone respects him and he never has to raise his voice – because when he speaks, everybody listens.”

Maldini thought about quitting the game in the summer of 2008 but decided to give his club one more season. Once again, he performed remarkably well – especially for a man who had seen his 40th birthday come and go. He was still as committed and keen as he was on the very first day he was thrown into the Serie A fray.

It was disappointing that a few Milan malcontents decided to make some kind of protest against the great man in his last game at San Siro, but there were no such scenes in Florence as he made his final farewell. There was hardly a dry eye in the house as his family and friends were guests of honour. It was fitting that his last game should see the Rossoneri secure a vital triumph which got them back into the Champions League. The old Maldini magic was still there, more than 20 years on from his debut.

“Everything has changed, from the speed of the game to its tactics but it is still all based on training,” he said. “It is all about physical preparation and technique – the same principles as when I started out.

“I have had a good life, filled with success in a sport I love,” he added – and it is hard to believe the feeling is not mutual. Football in Italy and further afield has been smitten by Paolo Maldini for two decades and more. If Milan can now call themselves the club with the most trophies in the world, they owe a large slice of that honour to him.

He was the golden boy of his country, too, although it never brought the honours he deserved with the national team. The game will surely struggle to find a figure of his stature any time soon. Handsome, skilful, composed, professional and hugely successful – no wonder the rest of the world was jealous.