Against the Viola we won the game despite better competition. Today it appeared Milan won the match despite themselves! Average performances around the board, in my opinion, but the team still had enough cohesion and solidarity to earn the three points against a historical "trap" opponent. Before I delve into the match I do want to share a funny quirk I have noticed about the blog as of late. Today I was forced to watch the game after the fact, being my father’s birthday and the Gold Medal hockey game caused a little bit of turmoil, but when I logged into the blog and noticed the comments on the match post hovering around 100 I knew Milan had won. How you ask? Well we always have more to say in a loss, and the comments seem to multiply directly relative to the amount of misery we have endured…so we lose by three goals, then you can assume around 300 comments. I guess the old adage misery breeds company is very true here…

I am going to start with Leo today, which is usually where I end, but I have to give him credit for his lineup selection. The only change I would have made would have been Clarence for Pirlo, but it appears Clarence is yet to be deemed “fit enough” to participate. Getting Bonera and Janks in was perfect, and putting Becks into a match where he could find some space and flow led to a sweet ball to Dinho to spark the first goal, and while he could have made some rotations earlier, and maybe even salvaged the injury to Pato, it is merely hindsight, and I appreciate the way he handled the team on this day.

The injury to Pato may be a re-aggravation of his previous strain and the internet is currently full of report after report with nothing but conflicting rumors. I am personally at peace with his potential absence against Roma, I feel Mancini is better for the match because of the emotion involved, so no loss there, and while he would be an asset against Man United, his last match against the Red Devils was VERY poor and if not fit maybe he can provide a late spark instead of a starting role. His goals today were nothing to gawk at; both being products of sloppy play, as opposed to top class talent, and his passing and even runs were frustrating beyond belief. With Pato the issue is not always is his absence, but more or less how to replace him. Considering this season’s up and down inconsistent play of the youngster, I am beginning to lean towards selling him to his old pal Carletto if it meant freeing up cash for Torres. How would that be for a front line with some bite!?

My frustration with Pato spread through the entire front line as Borriello looked off, and never really hit the ball well enough to be a danger. He barely even hit the target! The one bright spot is you can feel good about his chances, but please at least challenge the keeper. Ronaldinho was also a little lethargic, often times playing slowly while drawing three markers rendering himself trapped in a sea of Atalanta players. His PK miss was poor as well, and thankfully both players, having games below their usual standards, were able to make good and help soften the memory of such a pedestrian match. The difference with Dinho is he can still change a game in his poor state, but it seems that Borriello digs himself deeper and deeper with missed chances. It is one thing to be a striker and score early, the rest of the match is a euphoric high, but it seems to be the mark of a stronger player that can work through some early misses and find the back of net despite a poor performance, in this regard it was good he scored but he could have converted his chances much earlier. 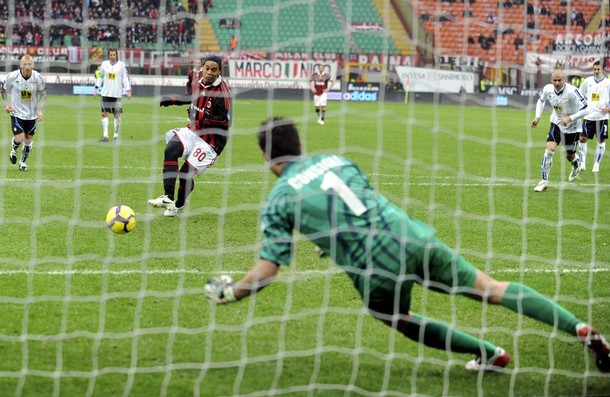 With Roma’s draw on the weekend, Milan has made further strides toward solidify second place and the top of the table. The three points came at a great time, and if Pato’s injury is less severe than first anticipated; then this win was solid, providing rest for some players and allowed for Leo to get some game time in for the likes of Janks. This is should continue against Roma, in order to maintain freshness for the trip to OT. This doesn’t mean that the Roma game can be overlooked or glossed over, and I will cover that match on Wednesday on Thursday, until then enjoy the highlights.