I may have had some computer issues yesterday morning, but it was Milan that had the real technical difficulties on the pitch. Call it whatever you want; regression, ineptitude, lack of awareness, but no matter what fancy name you give it, in the end it all sucks.

Leo has been relatively safe as of late here at the blog, and also in general media outlets, even recently praised for his master stroke against Genoa, but sadly things haven’t gone so well lately for the rookie manager. To call for his head would be harsh, but his growing pains are back in full force and Milan look to mirror the run of play they had early in the season in the same stretch of the schedule. September, October and November saw a loss to Inter, a draw against Livorno, a win against Bologna, a loss to Udine, and a draw to Atlanta netting five points out of possible 15. Some say the measure of a good team is to reverse poor performances, but right now we are poised to do worse with only two points from the first three matches and a trip to Udinese who already sent Milan packing from the Coppa Italia. Leo basically pulled a rabbit out of the hat in the form of the 4-3-3 to right the ship, but it doesn’t appear that any magic is coming to save the Rossoneri.

My biggest gripe yesterday, outside of the bad luck, is the lack of real patience in the attack. The best part of having an aging team is the experience, when to pass, when to shoot, and when to build up, but when younger players like Antonini and Abate are doing this better than an old men like Clarence or Pilro, the team is going to have serious issues. Clarence is first on the chopping block and his last two games have been atrocious, so bad in fact, if I were Leo, he wouldn’t sniff the bench for a month. Pirlo was not as bad, in fact moving and passing nicely, but his decision making skills were terribly off. 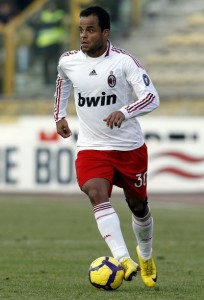 To compound Clarence and Pirlo’s sudden amnesia on how to play proper football Ronaldinho and Mancini looked like mirror images of themselves, lethargic and uninvolved, and if they are going to be relied upon to create and making the final run, we may as well throw in the towel. Ronaldinho has not looked the same since the Inter match, and it is impossible to know what on Earth is going on. He went from smiling, running, and playing very well, to whining for calls, sulking around, and playing like crap. Losing Pato has not helped matters as teams are now neutralizing Marco and Dinho and leaving the right flank to chance, but this team has enough talent to make it work as they did against Genoa and Siena. In fact the sharp and sudden decline is so alarming I can barely wrap my head around it.

As for Bologna, they turned to the game tested AC Milan Kryptonite battle plan, absorb pressure and counter as fast as humanly possible. Something changed though today, the defense didn’t get shredded, they constantly collected themselves and tracked back, and rarely were the victims of odd man rushes. For the first time in recent memory, I can say a Milan defensive line has some pace and was able to recover. Abate made a great tackle and even Bonera and Silva got back with some quick feet to stop Di Viaio from making Milan pay, as he has so many times before. It is a real shame that the defense has really improved in terms of pace and awareness, but has been let down by the attack. Who could have imagined a team scoring goals left and right, would go cold against the likes of Livorno and Bologna, again completely puzzling.

So as the first ever Friday evening game (afternoon stateside) approaches, you have to start asking the serious questions, what does Leo do now? I certainly don’t have the sure fire success plan, but a couple of theories can’t hurt can they!? The first move has to be no more Clarence, he slows down to play to a level that is painful to watch, it just doesn’t mesh with the fact that we have a bit of speed now and can run, his metronome style worked last year with Carletto, but last year is over, this is 2010. The second move, restore the balance in the midfield, Pirlo with any duo of Janks, Ambro, Rino, or Flamini, preferably Ambro, and any other players, but getting the big man who played great against Bologna a rest here and there wouldn’t hurt. Yesterday proved that he can’t be a DM and go forward on his own and he looked absolutely gassed at the end of the match, he needs help. Finally, and I know this is drastic, but in the absence of Pato, play a youngster up top, any youngster! Considering Di Gennaro and Paloschi are gone, Verdi is probably the best bet, and if Aadiyah is fit, he works too. I like Becks, but he can’t play a full ninety, and he certainly can’t play two games a week. If you need a veteran presence, than I am all for it, but the spot should go to a kid with pace who is going to work to impress. It can’t be worse than what we have going on there now, right!? Mancini!? The guy was a slug, and while I think he can help spell Dinho at times, he is can’t be a starting member of this team. KJH!? I think his performance yesterday speaks for itself, and Pippo is probably right around the same issues as Becks, he can contribute, but it has to be limited, and more importantly in the right situations. 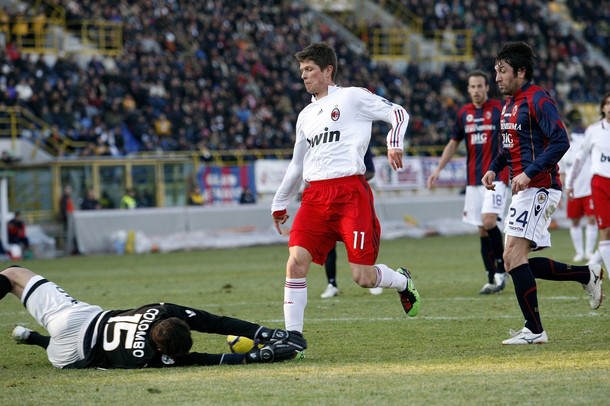 We have been down this dark road before, and doing it twice in one season has made us some of the best crisis managers in Serie A, and while we can all agree our expectations remain generally low, there is no reason why we can’t improve this current run of form…