I am caught in two minds regarding this match. Part of me says it was meaningless, changes in personnel and deployment made the team disorganized and less dangerous, so no reason to read too much into it. But there is this fiercely competitive part of me that is furious that our unbeaten run is over and that momentum is lost, but that’s not all. A good team is only as good as its weakest link and today exposed more weak links than I would have liked to see or worse, have seen by everyone watching! 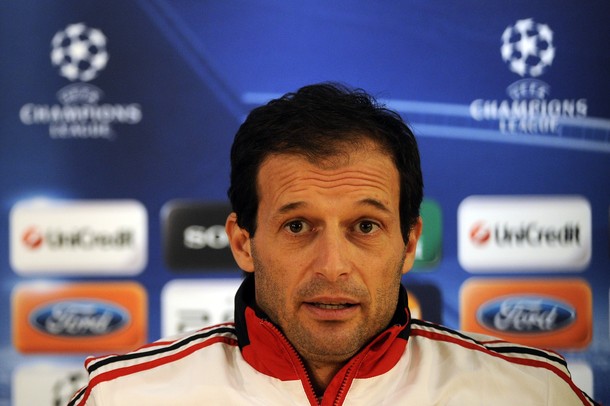 Allegri’s pseudo 4-1-2-1-2 today was clearly an effort to see if Pirlo and Seedorf could operate in a midfield diamond as effectively as the three bulldog midfielders are working with the CAM. It was an intriguing idea because it gives Milan a more dynamic passing attack if executed properly. The problem with this diamond midfield is that it leaves Seedorf and Pirlo down the middle of the pitch and if the wide DMs get out of position it gives the opponents a lot of space in which to operate, as the team gets overly narrow. Throw in a static figure in Ronaldinho and the balance that has been so solid for Milan in their consistent run of form is basically thrown out the window! Hopefully Max wrote a simple two word note to himself following this match, lesson learned, or the more cryptic, epic fail, depending on how you like your notes to self! I think it is safe to say we won’t be seeing that formation again anytime soon, it is a personal favorite of mine, but this team lacks the personnel ten times over to make it work.

Now formations and tactics are only part of it, what bothered me most about today was the general inconsistency of everyone on the pitch. It was like they decided to play for only a few five to ten minute stretches at a time. I understand the game had little meaning, but there are ways to play deep tactically, conserve energy, and still manage to earn a result. With that much “experience” on the pitch I just figured maybe they would be capable of at least that much. Nope, dominated in possession, dominated in the center of the park, and dominated on the score sheet, no doubt Ajax deserved the win on this day. 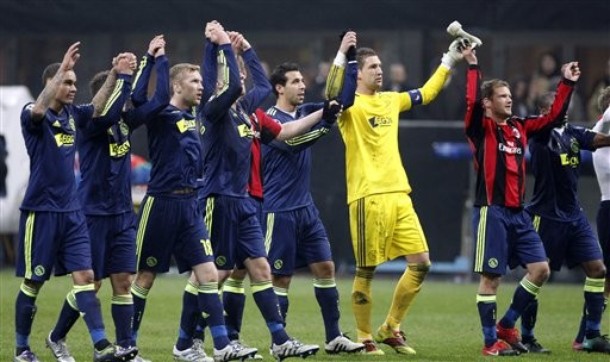 Now I don’t want to beat a dead horse here, he is clearly doing a fine job of that on his own, but can someone please write a eulogy for the career of Ronaldinho, or at least Ronaldinho at AC Milan!? Yes, the game may have been meaningless to the team, but for him it should have meant something and he should have shown that, now when his butt is planted firmly on the bench there is literally no one to blame but the player. Hopefully this one of the last few times I even have to mention his name. To some extent the same can almost be said for Pirlo who over complicated matters with low percentage passes and poor choices in possession, why not play simple, move the ball, and play within your means. I pretty much expected this type of lack luster performance from Ronaldinho, but Pirlo should be smarter after returning from injury and keeping things simple in the center of the park.

Onto Bologna for the weekend with the strike being “called off,” Allegri will have to erase this game quickly in training and get this team back into a balance organized unit. I can live with this loss a little easier if the team comes out swinging on on the weekend. I would expect Rino to return, the defense to go back to normal, and KPB most likely getting a start, but there is still a small issue of who plays CAM and will Ambro be able to go 90 if Flamini is not fit for the weekend? All problems that could have been avoided if Allegri put some faith in Strasser and Merkel on this day, and maybe the loss would have been even more palatable blaming it on the lack of experience in exuberant youth.

A few more odds and end to consider...

Bonera: he is officially the “mush” of AC Milan, no player has been on the pitch for more dropped points than this guy, a dubious honor to say the least. Maybe he and Ronaldinho should become better friends on the bench.

Ants: what happened to this guy? Last year he was in Prandelli’s plans, this year he can’t seem to recover from a forward run!? Kind of bothers me because he is our most fit and athletic LB and he can’t seem to get it together, this means more
Zambro, and that is never good. He had a great chance in a deep end line position to rake a ball across the face of goal, and instead a hopeful cross to know one, pretty much sums up his season to date.

Enoh: one word, WOW. Imagine this guy playing CM for AC Milan? Someone tell Braida and Fester he is Brazilian so they at least put him on the scouting list.

Borriello: played a great game today for Roma, and got the goal to see them through. Here's hoping Ranieri decides he needs to be rested for the match against Milan...

San Siro: there was a time not so long ago that teams came to the San Siro in the CL and knew they were going to drop points, I am not that big into nostalgia, all good things come to an end, but as I watch some of these little sureties disappear I can't help but wish for the Milan of my youth...