I will say it without shame, I miss Marco Borriello. But I don’t miss him as much as I now love Zlatan Ibrahimovic. I will also be first to admit I never really liked Zlatan, but he has done every single thing right to endear himself to Milan fans and me personally. He has worked hard, he has played with an edge and intensity, and he has simply been ruthless. It’s funny because like Marco, he still misses some blatant chances, but the mere idea that strikers don’t miss chances is a pipe dream. I also don’t believe we are as Ibra-dependant as made out to be, because while he has scored many goal, his work with Robinho and the midfielders has forced teams to respect all the players on the pitch and not just double and triple cover Zlatan.

In the same way that Zlatan has proved pivotal, Robinho has done just the same. The little Brazilian, also guilty of missing chances, has covered more ground in his last 5 to 7 starts than Ronaldinho covered all last season! He has also given Milan competition for time on the pitch and both Pato and Cassano should take notice at Robinho’s performances and what they need to do to earn playing time. One minute he is in the box making a great run and the next he is chasing the LB to hold up a counter or tracking back to collect the ball from Ambrosini and turn and face goal. Never thought he had it in him, but something about this team and Allegri has brought the best out of Robinho and with this comfort I hope we can see him continue to improve and be a player for this team for years to come. 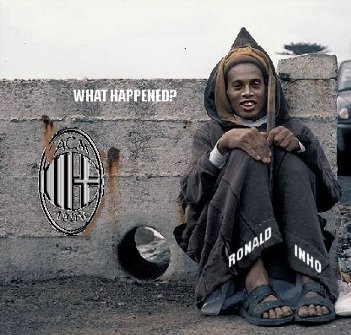 Speaking of Robinho, his fellow Brazilian Ronaldinho which he rightfully displaced, now sits firmly on the Milan bench which is neither deep nor useful to Allegri when a match is on the line. A bench that is desperately screaming for a CM, CB, striker and CAM has nothing of the sort to make in impact late in a game or take a place in the winning eleven. Adding Cassano will surely helping the attacking depth, but the January transfer window should be used to add a player like Lazzari, Montolivo, or Criscito to solidify the roster and give Allegri players to compete in both the CL and Serie A while not losing too much on the pitch in terms of talent and chemistry. Bringing back Astori would also be a simple no-brainer but it is unlikely that a move that would benefit in the both the short term and long term so the young Italian can forge a ten year partnership with Tiago Silva would happen. At this point bringing home on the cheap and getting a guy like Montelivo or Lazzari would also move this team forward for the future.

It is no secret AC Milan is not a long term project, this team is built to win now, this season or next, so adding players that can contribute right away and in the future would be excellent. I don’t always have a lot of faith in Fester and the Milan brass but with a smart move like Cassano, you have to think that maybe much like the team even the management is turning the corner. Should be an interesting transfer window and even better second half of the season, win or lose, I hope we can enjoy something special.