Share All sharing options for: Milan Legends: Invasion of The Flying Dutchmen

A while back Mrs. Shankly dropped me an early Christmas present. She decided to resurrect the AC Milan Legend pieces I had worked on early in my blogging tenure here at the ACMilanOffside.com. Thanks to Mrs. S the likes of Maldini, Baresi, and Albertini are joined now by not one but three of the most influential stranieri that AC Milan has ever seen. If you were to young to remember these fellas then get yourself on youtube or a DVD because it was special. Three Dutchmen and a handful of Italians comprised one of the greatest Club teams of all time! Enjoy the post and thanks again to Mrs. S!

Long before the young Klaas Jan Huntelaar slipped through our fingers, even before the elder statesman Clarence Seedorf practiced his brand of magic at the San Siro, there was a Dutch invasion that took Milan by storm. Three individual legends came together to form one super legend and brought the glory days to the Rossoneri.

The early eighties had not been good for Milan, as they had been struggling to overcome a couple of seasons in Serie B, having been relegated due to a matchfixing scandal in 1980, and falling back again in ‘82-‘83. Enter an entrepreneur called Silvio Berlusconi, who purchased the club in 1986 and immediately invested heavily in it. In addition to hiring now legendary coach Arrigo Sacchi, he bought world class players with the intention of becoming the most successful club in the world.

One investment was Dutch player Marco van Basten. He would become known as one of the most brilliant and beloved players ever to wear the Rossoneri jersey. He was a lethal finisher with both feet, incredibly agile, and also good with his head. His individual accomplishments speak for themselves: He won European Player of the Year three times, in ’88, ’89, and ’92, something only 3 other players have managed to do. He won the Ballon d’Or in 1989. He was Serie A’s Capocannoniere (top scorer) in ’90 and ’92. He was the first player to score 4 goals in a single Champion’s League match. He is now the 7th all time AC Milan scorer with 124 goals in 201 appearances, a record finally bested recently by Pippo Inzaghi. He was also known for his accuracy at the spot, with an impressive 92% PK success rate. These stats alone would be impressive, but are even more incredible given that Van Basten had a career long ankle problem requiring no fewer than 4 different surgeries. He played his last game in a Milan jersey at age 28, and finally relented to an early retirement at 30. It is amazing to think about what could have been had his career not been cut so short.

That same season, Ruud Gullit, a fellow countryman who is known as much for his massive hair as his footballing skills, arrived at Milan. He was a strong, physical player who embodied “Total Football,” a concept where players can play at any position and do so interchangeably within a match. His power and strength gave Milan a top player that would strike fear into any opponent. But he was also fantastic in the air and played with grace and great technical ability. After being awarded the European Player of the year award in 1987, he dedicated it to Nelson Mendela, using his fame to bring attention to the injustices in South Africa. Off the pitch, he also dabbled in a brief music career tied to his political interests, but let’s just say that he was a fantastic footballer.

One year later, in 1988, the third prong of the Dutch trident came along in the form of Frank Rijkaard, a childhood friend of Ruud Gullit. Coach Sacchi took the defender and transformed him into a defensive midfielder, and he dominated the pitch both verbally and physically with his aggressive playing style. Feared by opponents, but loved by coaches (except for the temper,) he redefined the defensive midfield position. And together with his compatriots he went on a winning spree that put AC Milan on the map as one of the greatest clubs in the world. 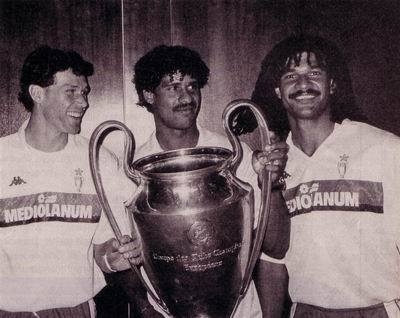 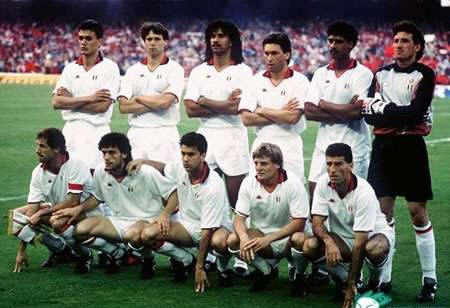 A pinnacle performance came in 1989 in the European Cup (now called Champion’s League) semifinal, when Milan slaughtered Real Madrid in the 2nd leg by a score of 5-0 (their first leg was a 1-1 draw.) Even more impressive is that all 5 goals came from different players. This may have something to do with their now legendary roster, which included the legendary captain Franco Baresi, a young Paolo Maldini, a player called Carlo Ancelotti and his buddy Mauro Tassotti, (where have I seen them before?) as well as Alessandro Costacurta and Roberto Donadoni. Milan went on to win the final against Steaua Bucharest 4-0, with a brace each by Gullit and van Basten. Not bad for a team who had won a penalty shootout against Red Star Belgrade just to progress past the 2nd round.

In 1991, Sacchi and van Basten had a falling out, so Berlusconi fired Sacchi, bringing in a young Fabio Capello as manager. Some might say it was ridiculous to change managers, but under Capello’s reign, Milan accomplished something that no other Serie A team has. From the end of May in ’91 until March of ‘93, AC Milan went an all-time Serie A record 58 matches unbeaten, the perfect season.

They still linger in the hearts and minds of devoted Milan fans everywhere. Six incredible years, a trio of Dutchmen, a dozen trophies, and a perfect season. Not to mention the foundation for everything we’ve won since. They ushered in the glory days of Milan. All three of the Flying Dutchmen went on to coach, 2 of them even coaching their national team. Despite dominating Europe, as players, they were only ever able to win the 1988 Euros with the Netherlands, but they were more than generous to win title after title for AC Milan.

After this year’s world cup, the Dutch have acquired a reputation for brute force and a thug playing style that overshadows their great technical skill. But not all Dutchmen played like this, not always. The trio of van Basten, Gullit and Rijkaard used incredible technical skills, brilliant form, and sublime class and style to give AC Milan a wealth of trophies and a legacy of champions.