With the purchase of Cassano all but confirmed it is time to look at this move from a tactical perspective and what it means for Max Allegri and AC Milan. While Antonio is not your prototypical CAM or striker, he provides coverage on the field in an area where Allegri has made due with the diminutive Robinho, the aging Seedorf, and the surprisingly effective Kevin Prince Boateng. It is expected that Cassano will slot in directly behind the strikers and make that role his own, allowing Seedorf to be phased out and KPB to do the hard work in the 3 man midfield, a position that also needs cover with injuries to Pirlo and Flamini, and having an extra body to mix in there will be important. 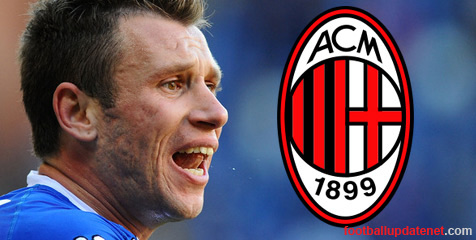 The biggest concern of many Milanista to this point has been one of balance, rightfully so. Balance is imperative to the success of a football team, and it is no coincidence that Allegri’s ability to strike that balance has made all the difference in the success of Milan. Gone is the 4-3-3 leaving ample space between the channels to counter attack, or drive an eighteen wheeler, instead Allegri has employed his preferred 4-3-1-2 in a very compact and narrow deployment making Milan difficult to counter against and even more difficult to clear the ball through the attacking third. Add a high pressure, high work rate attacking trio and suddenly you have team gone from slow and lazy with only a few players working to win back the ball, to almost ten players pressuring at any given time.

From what Cassano has shown in the past he has the ability to provide this work rate, and while he is certainly more dangerous going forward than he is tracking back, but if Robinho proved anything as long as you can front the ball you can hold up an opponent’s attack and be an asset on the defensive side of the ball. What Cassano does bring to the table offensively though is an upgrade from any player we have on the roster, and while I have never been personally enamored with supposed “fantasistas” it will be excellent to have a player who can collect the ball, turn and face goal and allow Robinho and Zlatan to get into dangerous positions to be successful on the finish. 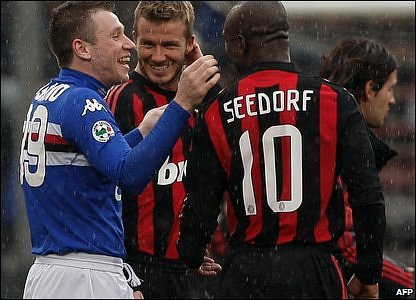 His ability to run with the ball at his feet, find a precision pass, or simply finish makes him an asset to AC Milan to shoulder some of the creative burden, and also to relinquish this supposed feeling of the Ibra-dependance of AC Milan. It also marks the end of the failed experiment of Ronaldinho at AC Milan, two years too late, but adding a player who can actually make a viable contribution off the bench will go a long way. Where Ronaldinho ends up is beyond me, and the pipe dream of making any money on the deal is pretty much done, lessons learned; Rivaldo, Ronaldo, and Ronaldinho all epic fails.

Cassano should beginning training with the team immediately after the Holiday and will probably make his debut sooner than the anticipated first game in February. I just hope he comes in motivated, ready to work, and focused because adding a player like this mid season has historically proven a success for Milan, and hopefully Cassano will do the same.