Share All sharing options for: Milan 0 Roma 1: Can't Win if You Don't Finish

I let this one marinate for a day, I watched the first half again, then I watched the goal again, again, and again. Simply shook my head in my frustration and started writing this post. The first twenty minutes were epic, but if you come up empty handed and don’t finish then you let the opponent off the hook, and more importantly allow them to gain confidence that they can absorb pressure and hit back on the counter, and that was the end of the AC Milan on this day.

It wasn’t even so much a master-class countering performance like the loss against Cesena, it was simply the case of an opponent being well organized and tactically efficient, and without the goal to force a change Roma grew stronger in possession as the match wore on and Milan, in extreme poor and disappointing fashion, cracked. You could see it their face: Zlatan, Ambro, and KPB, they were frustrated, rightfully so, but this lack of patience and resilience is what bothers me more than loss. No team has ever won a title without overcoming a bit of adversity, and today Milan couldn’t do it. 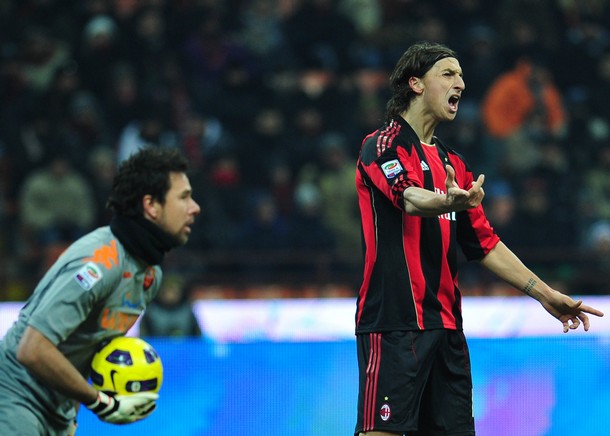 Credit to Ranieri for putting together a well balanced tactical plan that included a high defensive line giving Milan’s attacking trio little room to operate. It is a risky game that only takes one mistake to breakdown, but the defense was solid, and it certainly helped that Milan couldn’t finish. Both Zlatan and Robinho had opportunities early and in bunches, and if one of those goals goes in the game changes, but instead the frustration mounted. It is funny to think that a combo that has been so clinical the past few weeks couldn’t find the back of the net, but that is the nature of the game no matter how much is spent on the attack, the players still have to finish. Fittingly the man who was sent to Roma in favor of the shiny new strike force did just that, he finished, sure he may have known little about it, but he still put the ball in the back of net. Something many Milan fans felt he was not capable of on a consistent basis, but I guess he proved his point.

The real game changer though was the injury to Pirlo, and Allegri’s lack of real options meant Seedorf was sent in to function as effectively as Pirlo, but on this day Seedorf barely functioned. It stalled the attack and weakened the left flank dramatically, and it is no coincidence that is where the Roma goal originated from. Allegri is not without fault however, he could have easily swapped KPB into the LM role and moved Seedorf into a more advanced position, this may have been a negative move at first glance but would have solidified the midfield line and given Seedorf a chance to stand up on the ball and find a through ball to break the offside trap. Some of you would have probably liked to see Ronaldinho sooner for this exact purpose, but when you consider the best way to breakdown an offside trap is with clinical one-two passing and off the ball movement, I am not sure Ronaldinho would have done much to remedy that. Yes his bicycle effort, had it finished, would have been spectacular, but it would have only tied the game, and the fact that it didn’t go in will erase that memory after a day or two anyway.

So let’s put this all into perspective, three points dropped at home, yet we go into the break top of the table for the first time in 8 years. Sure with a win we would have had a chance to have the biggest lead a Milan team has ever had since a legendary 1992 team, but that didn’t happen. We are still top of the table, and we are still a team capable of mounting a challenge for a title. I hate calling us favorites because frankly, that breeds complacency and I hate complacency. But considering the circumstances, I think we should all be pleasantly surprised at where we stand at the moment. Come the New Year the team will get healthy, and we will possibly be welcoming, a former Roman no-less, in Antonio Cassano. More on him later this week, but you have to think in a match like this he is the type of guy that can make something happen, and maybe he will get his chance against Roma, in Rome. Who knows?