Today in 30 minutes Pippo Inzaghi; a man of enduring quality, desire and determination, accomplished more on the pitch than the man he replaced, as well as a few of his teammates, while giving me a glimmer of hope. Hope not of titles and trophies, but hope that someone actually cares about this team, shows passion for this team, and gets fired up to the point of utter madness after scoring his 70th Champions League goal and treating it like his first! I can’t often find a positive in losses or draws, but for some reason the resolve from today’s match, regardless of the result, had me feeling that this team really does have a pulse as feint as it may be at times. 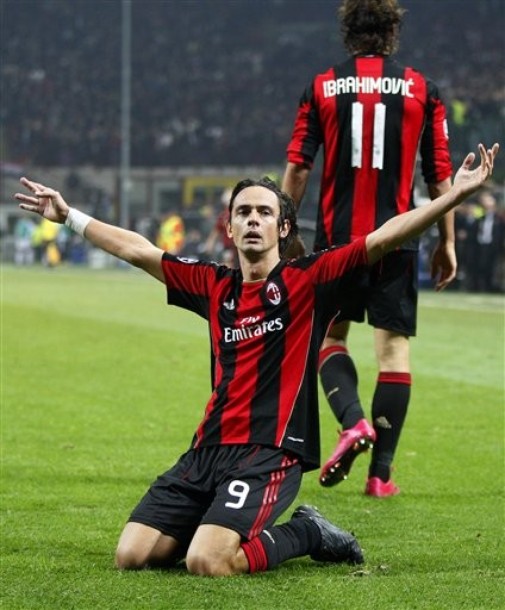 That pulse however came not in the form of high priced strikers, or samba dancing has-beens, instead that pulse came from the players that have kept this team pumping for the past few seasons, through all the grief and changes, these guys still find a way to give their all and should be a lesson to anyone on the team or anyone trying to break into the team. Watching Rino run himself into the ground and then stand up on the side line cheering on his teammates should be inspirational enough, but watching him do what he can to make tackles, win back possession and jump start counters is even more impressive. Simply put when a player seems to be giving his all for the cause it is far easier to get behind him and support him over others who are not meeting the demands of the match. The same can be said for Pippo who was electric upon coming on and while it helped that Allegri loosened up the attack by moving to a 4-4-2, his ability to get into the right places both left, right and center is a far cry from the static Ronaldinho and Pato before him. In fact Pippo’s first goal was a product of Zlatan moving into a space that he didn’t once venture into in the first half. Simply put it is this type of emotion and intensity that this team is lacking, and if players in their twilight who have nothing to left to play and have won everything there is to win can find it and show it! There is absolutely no excuse for anyone else. 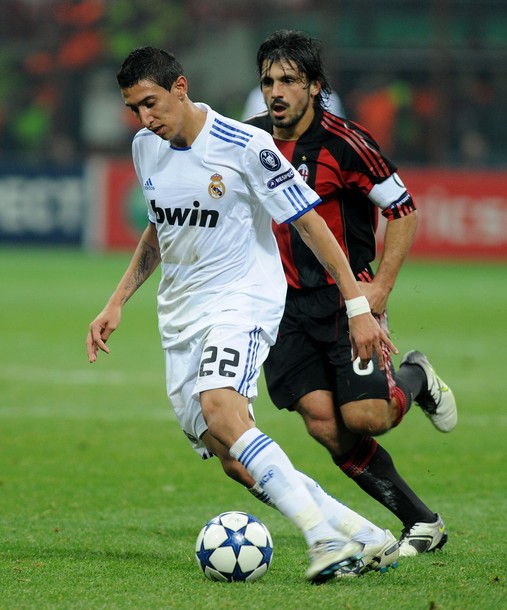 This show of resolve however doesn’t mask the fact that Milan were awful in the first half and should have probably been down 3 goals instead of just one. They were comprehensively out passed, outpaced, and out muscled in every aspect of the game. Even Pato whose claim to fame is blistering pace was caught by Marcelo and Pepe with ease. Jose Mourinho sent out a very narrow 4-2-3-1 that caused problems for Milan who didn’t have the bodies to fill in back and central to cope with the attack. At times Madrid were attacking 7-8 outfield players and it doesn’t take a mathematician to realize that if we only track back 7 players there will be problems with pressure and cover, let alone man marking!

Credit to Allegri though in the second half who didn’t stand frozen on the sidelines and let the match get away, he made the changes, difficult ones at that, and by difficult I mean removing Silvio’s pressure attacking trident. With these moves Allegri shifted the squad to the aforementioned 4-4-2, but his lack of options on the bench was still a massive problem having to turn to Seedorf when the game needed an extra defender, not an attacker. It’s funny to see people ask why he didn’t go with Flamini, but if the Coach doesn’t have faith or trust in a player to put him on the bench, you can’t expect him to give the guy minutes in the biggest match of the season to date. Just isn’t going to happen and if that is the case then we are better off with the money then the man on or off the bench. What the 4-4-2 did was present a crowded midfield to Madrid and closed down passing lanes meaning it was easier to pick of passes and quicker to get onto the ball which was evident after the switch. Sometimes getting back to well organized basics is the best option.

Credit must also be given to Abbiati, who was near perfect except for the 93rd minute blunder, but even Casillas was guilty on this day, so it seems these matches are a challenge for keepers. Abate did well to keep pace with CRON, and though he was dangerously close to red card late on, his pace at least kept someone in CRON’s vicinity forcing him to get wide when closer to goal. Pirlo also played well, but not in his usual passing role, the guy was a strong on the tackle and made not one, but two goal line clearances. He eventually found his passing legs later on the match as well, but the formation shift helped in that regard.

So a match that looked to be a 3-0 thrashing ending in a 2-2 draw, not the best result, but certainly not the worst. Allegri was able to make the tough choices and experiment with a very basic 4-4-2 that may prove useful. SuperPippo, was well, SUPER, and the rest of the old guard proved that even against their most ardent critics they can still find it in themselves to play well, something that can't be said for players younger and even more talented. Let’s not kid ourselves, this team is still in need of a makeover, badly, and games like these don’t mean contract extensions for a player over 30. But what it does do is make you smile and remember that on a night like this AC Milan can still play a bit, even if it is only to a draw!