This morning I woke up to some Viola fans emails and tweets asking me if Milan we ready to lose this weekend! I chuckled, and recalled how not that far long ago, this match was quite a rivalry as Milan had to deal with the likes of Manuel Rui Costa and the great Gabriel "Batigol" Batistuta. Fiorentina have always been a formidable opponent and in even in more recent years AC Milan have found themselves on the outside looking in as Fiorentina secured Champions League football leaving Milan the odd team out. This year should serve no different with the table position meaning very little this season in Serie A; this game can go in anyone’s favor. 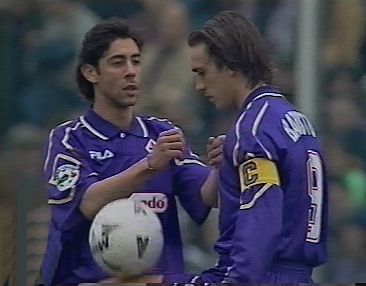 The common theme of this game is not the star power, but which Coach can get the most out of his injured roster and earn the result. Fiorentina is without the services of Frey, Montolivo, and Jovetic, and it would appear that even Mutu and Zanetti will not be match fit. Mutu just coming off suspension was finding his legs and Milan’s defense will be fortunate only having to contend with Gilarindo. I say that almost sarcastically because Gila has always been a favorite of mine and a great striker, but a player who struggled with confidence in his years at Milan, it would almost be fitting that he buries one at the San Siro and I wouldn’t be surprised if he plays with that extra swagger to score that goal. Despite the injuries two Viola players who cannot be underestimated are Vargas and D’Agostino. Both players can simply change the game with a single shot, and it will be important to limit their time on the ball and keep them out of dangerous spots.

Sinisa, whose as much an Interista as anyone, will deploy his team in a 4-2-3-1, a formation Allegri has not had to play against since Jose and Real Madrid. The steely 3 man midfield should do well to counter that attacking line leaving Gila in the capable hands of Nesta and Silva, but D’Agostino remains a concern if he is giving time and space in the center circle to play smart passes and give Fiorentina time to possess the ball, send players forward and attack the Milan defense with pace and numbers. Whoever Allegri deploys as the CAM will have the added task of stopping the ball on the foot of either D’Agostino or Donadel, or simply put, making sure Donadel is the player whose sees more of the ball.

Because the CAM role will be pivotal in the success of the team and keeping the balance, it is evident that Seedorf will be given the reins over the likes of Robinho or Ronaldinho. Allegri came out in his pre-match press conference and stated that Ronaldinho could even feature in this match, but it would most likely be closer to goal. As the work needed to play CAM in this match is not really in Ronaldinho's repertoire. Zlatan who should by all rights be rested, will most likely start alongside either Ronaldinho or Robinho, in front of Seedorf. Pirlo is struggling with fitness, and I actually feel anxious to see if he can excel in this CAM role, in the meantime Seedorf can continue to cover and if need be Allegri can switch to a standard 4-4-2 if the old Dutchman shows his age.

The rest of the team will most likely be a collection of the regular players with Flamini, Ambro and Gattuso in the midfield with Prince on the ready. Defensively Allegri will have to cope with the Red Card to Abate, which is frustrating because when a player is improving, you want him on the pitch all the time to keep that confidence building. The logical choice is probably Zambrotta but the sight of Vargas running full steam at the shadow of what was one of the best RBs in the World, albeit five years ago, makes me cringe. If ever a game where some pace was needed down that flank this is the one. I would almost start Ants at his more natural RB spot and let Zambro flub up and down the left, but at this point your guess is as good as mine. Nesta and Silva will continue to boss the middle and if last week was a showing of what these guys can do when fit and together then we have to find a way to make sure they stay fit and in form!

This game is important to me on another facet as well. Last year in positions such as this one, where our team could move into first, stay in first, or just make a statement. They failed each and every time, unable to score goals, defend, or get the result to take them from being a flash in the pan to a legitimate contender. This game is a statement, three points here, and you are telling Serie A, this is Milan’s title to lose. A collapse and we are right back where we were last season, good sometimes, but never great. I prefer great and with a little bit of grit and determination mixed in. Big game for Allegri, and bigger game for Milan.