Share All sharing options for: Inter 0 Milan 1: The Derby is OURS!

It's funny, I don't usually take this long to review a match, but it was almost like this Derby needed to marinate in my mind, I needed to ponder it, and weigh its importance. As I watched it a second time around I found that my initial feeling of pride and being able to watch a team firing on all cylinders working for one common goal was in fact true, and that finally this Milan team has found some sort of identity, intensity, and resolve in the face of adversity. To stand tall for 30 plus minutes down to ten men, and limit Inter to half-hearted long range attempts at Abbiati was truly spectacular, and while Inter look a shadow of their former selves under Jose, the talent is there and the victory is still impressive. 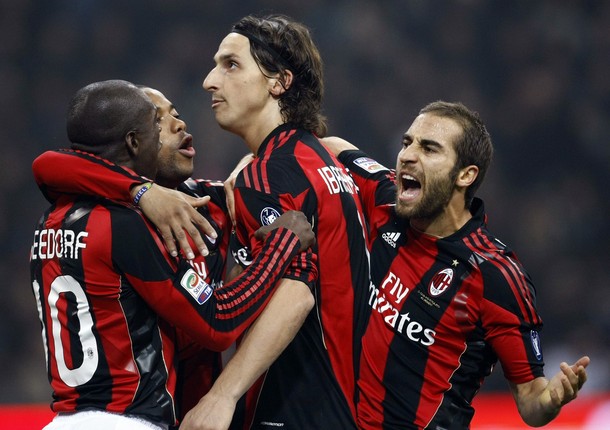 I think it is important to get this out there, I don't like winning on a PK, and while it is tough to argue against the call, I think it was clear that Materazzi caught Zlatan. As a Milan fan though I take great comfort in the speed and intensity to which Milan came out of the gate reminiscent only of the first match of the season against Lecce. They came out with such intensity it was nothing short of a miracle that they still had gas left in the tank to see out the result. Seedorf and Robinho ran themselves ragged for the cause, and Zlatan was basically a statue by the end. Credit to Flamini and Ambrosini who put in fantastic performances on both sides of the ball, and ran to the very last minute, keeping Inter's increasingly dangerous midfield in front of them and giving the defense amble time to get organized. While still finding the legs, specifically Flamini, to get forward as the match wore on. Their performances were certainly MOTM material, but the crown goes to the CB duo of Nesta and Silva who looked nervy early but were able to the work of keeping Samuel Eto at bay and dealing with an increasingly dangerous Inter attack. Silva's great tackle on Eto about eight yards out and Nesta's head ball win were statements that when healthy this duo is capable of amazing things.

Credit also has to be given to Allegri, who by sticking with his 4-3-1-2 has given Milan some comfort in tactics and balanced the team to the point of being contenders. The red card and fatigue prevented Pirlo from seeing action as the CAM, but at this point the result was more important than positioning and experimentation. Employing a 4-4-1 showed his desire to protect the result and unlike the match against Real Madrid Milan stood strong in the final minutes to preserve the shutout. It will be interesting to see how Allegri approaches the match following the mini International break, and if players will be rested on the upcoming match weekend. It is also important to note the shear organization of team behind the ball, a problem in previous matches that has been corrected to excellent results, I hope to cover this in a tactics piece on Thursday.

I don't often talk about our opponents unless it is warranted, but seeing what Rafa has done to a juggernaut is puzzling. Injuries aside, his seemingly stupid need to force this team to play the way he wants instead of adapting Jose's system to some extent is proving suicidal. It also doesn't help that Milito can't seem to get going and Sneijder is still on a World Cup hangover, rightfully so. He seems to switch players at will, and doesn’t let any sort of chemistry develop, much like he did at Liverpool. I can't see him sticking around if these results continue and with the players at his disposal one would have to expect a little bit more. 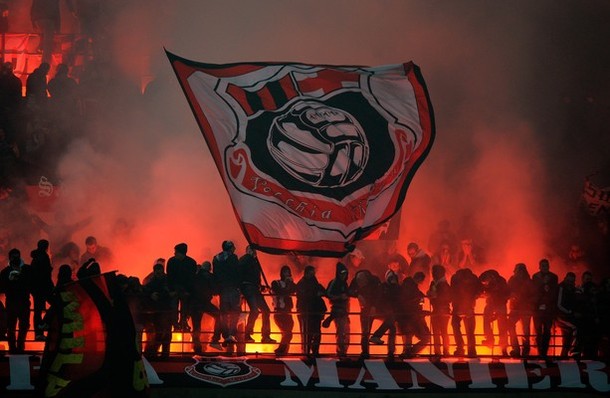 So where does this leave AC Milan? A few weeks back I would have simply told you this team was not good enough to win a thing, no balance, no personnel, no way to cope with attacking teams. I still tend to believe a lot of that, but now there is this strange determination and desire on the faces of the players that leads me to believe that there will and determination may actually carry them through. Talent is one thing, but shear desire is beast when used properly, and finally this team has some! With that said, three wins on the trot, a derby in the back pocket and a one point lead over Lazio at the top of Serie A!! Not a bad November! I am not going to sit here and say the Scudetto is ours, or that we are the favorites of Serie A, the season is long, and last year's epic spring fail was no surprise. This team has potential, but I will take consistency first and foremost. A couple of notes to end with:

-Despite Abate's foolish red card he looks poised to take over the RB spot. His match against CRON was some sort of wake-up call that told him he can do this, and he has. His runs are not always venomous but they are calculated and his is providing a wide option when the attack springs to the right, if he could get to the endline with some consistency his speed will be a problem. With his defense improving, this kid may make a RB after all, I wish Tassotti would show him the ropes a bit!

-As if Zambro being finished was not clear, yesterday continued to prove it. He did admirably in defense and we were fortunate Inter didn't exploit him further, but his lack of pace, poor passing, and general discomfort on the left side has been exposed. I wish Antonini would find last season's form so we could at least have an Abate/Antonini combo at the fullback position.

-Thiago Silva struggled early to find himself but man when he did he became a beast in the back.

-Robinho's defensive help yesterday was not stellar, but the shear fact that he chased midfield runners giving enough time for Milan to get players behind the ball and get organized in defense, Pato should take notice.

-Ambro has been quietly fantastic since making his return from injury, he is bossing the middle, and playing simple to get the ball forward and wide. His runs are also causing trouble for the opposing midfielders as he needs to be tracked because he can score when given the chance, unlike a certain Rino Gattuso. He should have seen Red yesterday and was lucky, but Derby matches seem to unhinge the snarling dog, and while I love the intensity I just feel he is borderline crazy alla Jason Statham, as the Monk, in Mean Machine:

-Finally I have to give props to Flamini, he has proved the better option over Prince and his play in the last few matches has been decisive. He certainly proved me wrong, and I am better for it! Here is hoping he stays fit and continues to improve.