This One is BIG!

Share All sharing options for: This One is BIG!

Twice a year we as Milan fans are treated to what is not necessarily known as the greatest derby in the World, but when you consider the success and history of the teams, it has to be pretty damn close. To make it even more interesting for the first time in my lifetime it is not Milan that are the toast of the town and top of the World, it is in fact Inter, and after winning the treble last season I can tip my hat and show my admiration, but only just long enough to demand an that my team take back what is rightfully theirs, the title of best club in Milan! 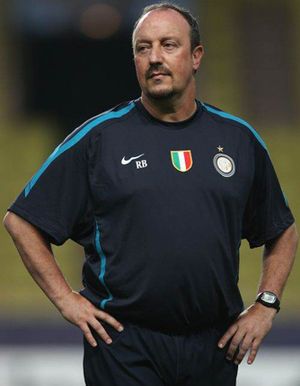 The task won’t be easy and I don’t care that the Special One is gone and replaced by a buffoon. This game needs no coaching, no superstars, and no preparation. This game means far too much to the players and fans involved, and regardless of any injuries or lack of form, each and every player on the pitch should give it their all simply because this game demands and deserves it, so who is up for that challenge? Inter has had a rash of injuries, but I won’t trust a single word of that black and blue camp until the lineup card is posted on Sunday morning. Maicon and Samuel are out, but the rest are to close and the stakes to high to not do their best to make fitness. Milan was also struck by a rash of injuries and for the first time all season wasting money on 17 strikers seems like a good idea with both Pato and Pippo inured, sadly the news is not good for the ageless wonder Fillipo Inzaghi, season ending yes, but careering ending at his age may also be a possibility.

Allegri has made a lot of progress tactically with his formation and his preferred 4-3-1-2 with a narrow bulldog midfield is finally seeing the light of day to great success. The past two matches were both successful save some defensive lapses, but you can actually see progress and that miles from the early season erratic form of varying formations and personnel. This new consistency should help simply in the comfort department and dropping some of the dead weight has proved helpfu,l but his willingness to use old legs, notably Seedorf, in the right circumstances, has been good as well. The real concern continues to be a CAM alternative outside of Clarence. Injuries will see the dynamic duo of Zlatan and Robinho, who have developed a strong understanding with each other, but still lack the real finishing touch to make them a force. I think Zlatan will have some motivation for this one, and I am sure a picture like this will make our crosstown rivals smile... 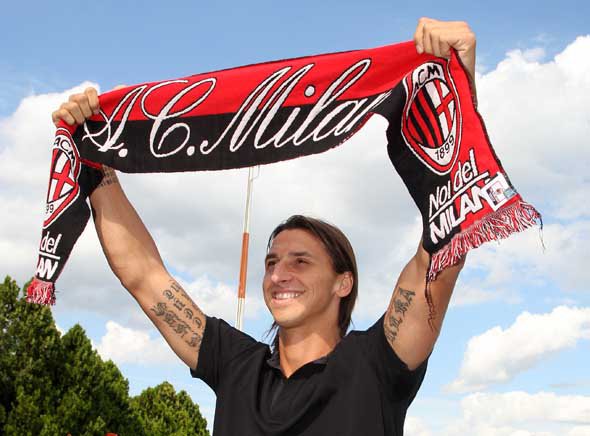 The three midfielder battle is looking more and more like Flamini, Rino, and Ambro, with Prince the super sub. I am OK with this because of Flamini’s form of late and Prince’s poor decision making. Either way we are finally covered in that sense. Defensively Abate has been improving since his Madrid math and Nesta and Silva should be back and rested for Sunday. Antonini gets the nod at LB, well for no other choice! He has been noticeably off this season, but played well enough against Palermo picking off passes and tracking back nicely with cover from Prince, he has the tools and skill set but struggles to find a groove in the match, hopefully he is turning a corner and finding the form that made him an Azzurri candidate last season.

Back to the little problem of the CAM, and who plays there. Allegri tried Ronaldinho and that was an epic fail, he then tried Robinho and it was evident he needs to be closer to goal to be dangerous. Seedorf, who actually thrived in that role for most of his career, has been good, but he can’t play every match. So it leaves Pirlo as the man forced to step up and make that position his own until cover is purchased. I don’t see this as that big of a problem, he can make up for his lack of pace with his passing, and he is very adept at holding the ball and waiting for players to join the attack. This is especially intriguing because our runs from the midfield of late from Ambro and Flamini have been stellar and this may really put Inter’s back line and mids under pressure pinning them back and giving us an easy midfield win in the neutral third of the pitch. If Pirlo keeps things simple, works with Zlatan and most importantly changes the point of the attack, Milan should have plenty of chances, we just need to finish!! (SIDE NOTE: This is the latest and it looks like Pirlo is out of the Derby!) I often chuckle at the summer discussion of how important it is we have clinical strikers, and every time I see us flub an easy one I shake my head, the job of a striker involves missed chances, I don’t need clinical as much as I need short term memory so they bag the next one.

The real concern I have from an Inter standpoint is Eto and Coutinho (if he plays). The young Brazilian has proved to be a very smart player, and when Inter is buying better Brazilians than Milan you have to believe our scouting has gone down the toilet. He is almost a hybrid style player who is just as comfortable checking to the ball and facing goal as he is slashing and dashing from 20 yards out. Abate will probably be charged with his marking out wide but as he comes inside he can be very dangerous. I really just hope Silva and Nesta can do the unenviable job of keeping Eto quiet, it is no secret Eto is one of the most complete strikers in the game and his work rate under Mourinho was exceptional and there seems to be no drop off. The joke is this game will finish Eto 1 Zlatan 1, but if Milan can limit his chances on the ball that shouldn’t be a problem, but easier said than done. I remember a few season back when Carletto said there is only one striker worth adding in World football to his team and that striker was Eto, thanks again Silvio, you dumbass. 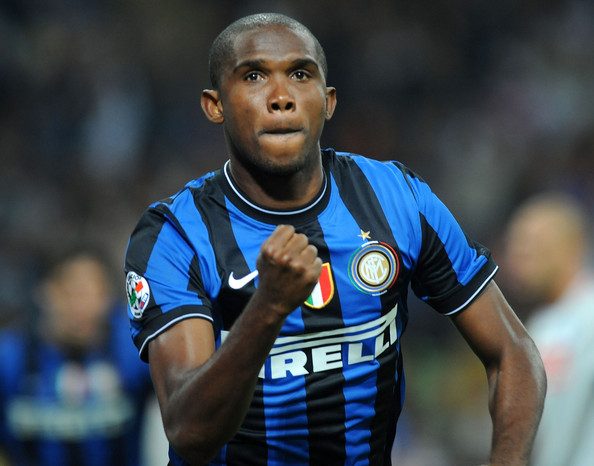 I am also intrigued at the possibility of seeing Santon go 1 v 1 with Robinho and Zlatan. He has not shown the quality he had a few season ago, but is finally starting to get some game time. I like the hype around the kid, but I hope he can be exposed on more than one occasion in this match. It would have also been nice for Pato to go flying past the Inter defense like Gareth Bale did, but he injury concerns continue for the Duck, and at some point I need to address my feelings about him and my growing suspicions that he is worth more to Milan on the transfer market than on the pitch. But that is a discussion for another day, because the focus is the Derby and a chance for Milan to lay claim to this Scudetto and prove that while this team may not be able to compete on all fronts, we can take back a title that belonged to us long before it ever belonged to Inter. FORZA MILAN!!!!!!!!!!!!!!!!!!!!!!

On a side note don't forget to check out the Inter Offside, while they are crosstown rivals, they have mostly been a classy bunch...OK...Jo will probably take more credit for that than MAD (sorry bud), but either way best of luck and sorry for having to take back what is ours!

The AC Milan Offside continues to go viral! If you spend as much time on facebook as you do on this blog then you may want to visit the AC Milan Offside Facebook Page. Don't forget you can get your fix on Twitter too, not just of the Milan Offside Blog, but some of the other quality blogs from the Offside and footballing World as well!