Share All sharing options for: Milan 3 Palermo 1: I Can Get Use to this View!

Well it is not every match day that Milan sits at the top of the table, we have seen the top on a few occasions in the past few seasons, but the moment has always been fleeting. While it is nice to be on top, it is time this team shows it can stay there, but as always there are some concerns and more importantly a price to pay for the three points earned.

I am actually quite pleased with the result, the first half was a fairly strong showing in the attack and the three man bulldog midfield is paying dividends. But there are still issues with the finishing product, the quality of shots and taken and the patience for one more pass in the attacking third just seems to be missing. It doesn’t help that Zlatan and Pato seem to lack any real chemistry, and Zlatan blows hot and cold with every single touch. His link with Robinho was actually very nice, and it is clear he has a better understanding with Binho than Pato. To bad Robinho couldn’t return the favor late on with a poor ball across on a clear and simple 2 v 1. Even Seedorf performed admirably but was lacking with the final pass to break down what proved to be a discipline and intelligent Palermo defense. 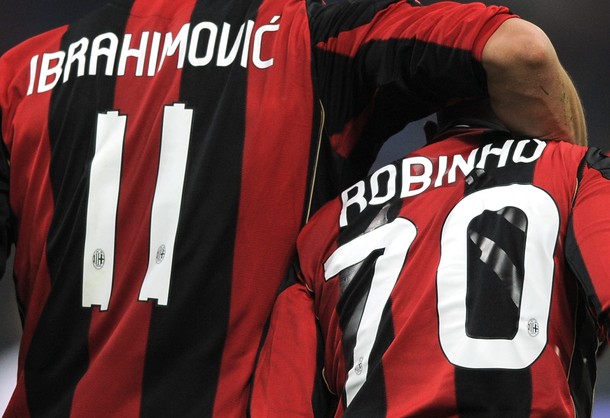 Speaking of the Palermo defense, I was impressed with all of them, but the quality of players like Cassani and Balzaretti is evident, and if relations between Palermo and Milan were not so sour, one would believe a fair transfer amount would at least pry one of those fantastic fullbacks up to Milan. Maybe Genoa can buy one them and subsequently loan them to us? Their bursts into the attack and their solid defensive cover shows how far off that mark we are with Abate and Antonini. Even one of those guys would make a World of difference! Bovo was also very solid but as space opened for Milan as Palermo chased the goal, the midfield runs proved the undoing and Milan’s possession finally killed off a game. But yet again it was not with a clean sheet, and while Abbiati was screened his lack of a reaction is infuriating to at least make an attempt at ball that he would probably wouldn’t have saved, but better to know he at least saw it. Changing keepers is never good as it breaks down lines of communication and comfort, but puzzling errors like these really leave something to be desired. 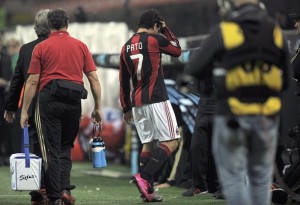 With no word on Pato and Pippo it will be tough to gauge the extent of the damage. Pato appeared to be a left hamstring problem, the same hamstring that has plagued him all season long. Pippo appeared to be a lower left leg issue and the hope is that his knee did not buckle and that his removal was simply precautionary. Hopefully by the time this post goes live we will have some answers. Zlatan will be borderline exhausted by Sunday, and Robinho will have to step in to play as well. I will cover Derby concerns in a few days, but there are still a few more points I would like to address:

-Flamini has been solid in the past two matches, and his willingness to make deep runs along with Ambro makes the Milan attack all the more dynamic by forcing those players to be marked and keeping the defense honest. In a certain 4-3-3 those midfielders were always pinned back, but with a bit more balance now we can have a deep runner or two which has proved successful in the past two matches.

-I love Boateng’s work rate and hustle, but his decision making is horrendous. He took some smart shots early, but once Palermo realized he wasn’t going to pass they closed him time and time again. He made a lot of mistakes late on as well, and he needs to keep things simple to be an asset. Based on recent performances the bulldog midfield should be Flamini, Ambro, and Rino with Prince on deck.

-For the first time in two seasons Abate actually looks like a RB, he got forward with pace and width and covered back admirably. He is still prone to a silly fouls due to positioning but this performance was solid enough to warrant a start on Sunday.

-Robinho is proving to be a spark plug off the bench, but he takes time to adjust to the match, and makes mistakes like that square ball because of it. Hopefully a full 90 will do him well. 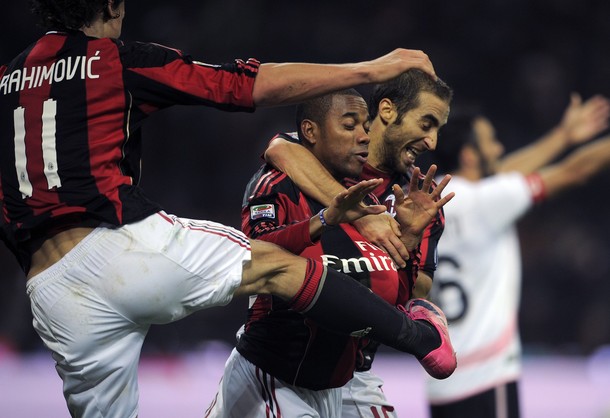 -Palermo, to their credit, has built a very solid team and with Miccoli getting healthy, he should find a nice partnership with Pastore and Ilicic. They are a good team, but mistakes cost them, and seem to be their kryptonite this season.

-Seedorf, for all the flack he gets, has proven to be a calming force as a CAM. He doesn’t over extend or get to far wide and forward, he is smart enough to fill in behind the ball and while he never wins a tackle he closes passing lanes and moves enough to be a factor. He played some great balls through, and while he still has this awful habit of slowing counters, he has been a big help in the past two matches. Pirlo should only improve that performance in this role, or at least one would hope...

-Allegri finally seems comfortable in his own shoes. His subs today were forced, but his formation and tinkering seems to have finally made an impact. A good run of form that is improving every match is a great sign. Hopefully injuries don't derail this progress.

Back Friday with a preview of only the biggest match of the season, and hopefully gives us a very nice picture of this team as a contender or a pretender. Until then, enjoy the view from the top!

The AC Milan Offside continues to go viral! If you spend as much time on facebook as you do on this blog then you may want to visit the AC Milan Offside Facebook Page. Don't forget you can get your fix on Twitter too, not just of the Milan Offside Blog, but some of the other quality blogs from the Offside and footballing World as well!