First and foremost this is a win I am proud to hang my hat on. Now I know we only won one nil and were wasteful in front of goal, but this team got three points away from home, dominated possesion, stood strong on defense, and made good on a lineup that was less than balanced. Funny that the little issue of finishing is still hanging around? Regardless, it is this type of win that when stacked up leads to titles, and while Milan is still far from a title hopeful, this day at least starts with AC Milan right where they belong, top of the Serie A table.

Allegri went ahead and deployed a 4-3-3, but the tactics seemed to changed early and for the better as both Ronaldinho and Robinho tucked inside into a pseudo XMAS tree when Parma was in possession of ball. While neither was a tactical dynamo, the mere fact that they were able to pester and close down the two DM’s in Parma’s 4-2-3-1 kept Parma from breaking super fast counters leaving the back like exposed. The dynamic tactics didn’t end there, in stages of Milan’s possession the team switch into a 4-3-1-2 with Ronaldinho in the middle and while much like the tackling he didn’t really wow with his CAM performance, he did enough to play simple when he could and move the ball off his feet. Was it a stellar performance, not by any stretch of the word, but it was the time of adaptation and evolution of his play style that this team desperately needs.

I don’t want to spend to much time on the tactics side of the match as I hope to sum it up next Tuesday or Thursday with a proper tactics piece, but as someone mentioned in the comments it was the first time that this team actually seemed cognizant and aware of positioning, roles, and responsibilities. The way they changed on the fly, took advantage of weaknesses and vacated spaces in the Parma defense actually showed what a team with experience and guile should look like, all I can say is FINALLY.
Have to admit there was some frustration in the play of Zlatan and Robinho who were consistently in good positions but seemed disjointed time and time again as to who was willing to shoot, their runs of each other were also not in sync. It certainly didn’t help that Mirante had an epic formation, which is par for the course against Milan, but either one of them scores on this day and this game is a statement and a solid victory. I was also disappointed in the play of the wingbacks but at times it seemed like they were almost forced to stay home. It also didn’t help that Parma was keen to expliot the flanks early as they had little resistance until the fullbacks pressured, but once Allegri shifted Dinho and Binho in the problem was solved. 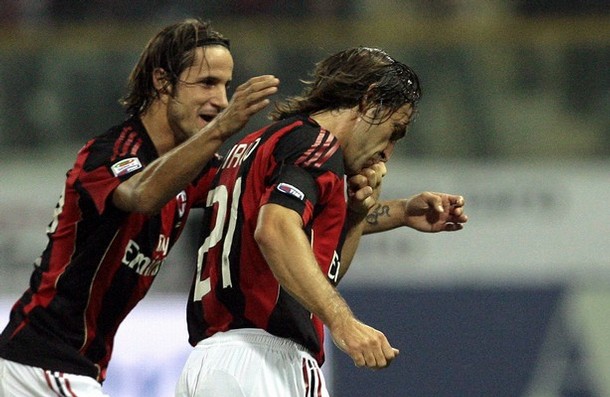 The day however belonged to a one Andrea Pirlo, who merely a week or two ago was being slandered on this blog as though he was on par with the worst footballer in the World. For those who have yet to understand the value of this player to this team, today was a prime example, he was in the middle of almost every pass from defense to attack and his shot was pure class. I don’t even think he needs to be the man to score goals, but the high percentage passes into feet of our “danger”players kick started almost all of Milan’s chances on Parma goals. It is unfortunate the excellent ball to Antonini was not finished by him or Robinho across the goal mouth. 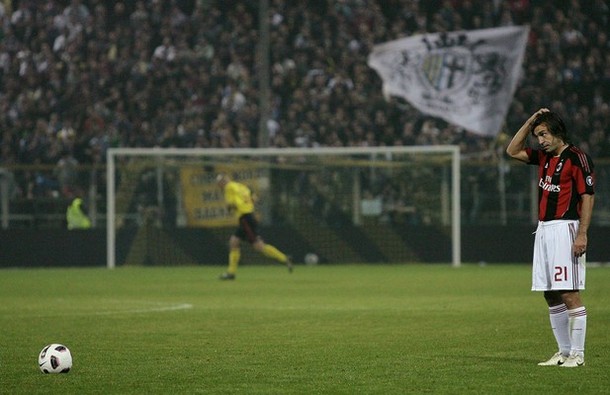 It is becoming increasingly evident that if Milan’s opponent on the day do not hassle Pirlo then he will be able to do what he does best and Milan will be successful. Parma came out with the intention to attack and Milan was more than able to handle it, but if the opponent decides to pack the box Milan have yet to find an answer to successfully attacking the ten man defense. Allegri now has a bit more options at his disposal as the past few weeks have given him flexibility in personnel and formation and as Pato and Ambro become match fit the team should continue to improve and hit its stride.