Saturday starts the five longest days of this young Milan season. Welcoming Juventus and Madrid following a battle against Napoli is not exactly an easy task. Especially considering the list of walking wounded on the roster, but with the promise of Antonini, Silva, and Ambrosini all getting healthy for the weekend, Allegri may have a few more players at his disposal and a few more injured which may prove to be a blessing in disguise.

It was no secret that Robinho made an impact in Monday’s match, he looked motivated, scored a goal, and worked on the opposite side of the ball to slow down Napoli counters and give Milan numbers in the defending third, a welcomed change from defending with only seven men. Pato and Zlatan couldn’t be persuaded to do the same, and if at least one of them finds some “legs” to pressure the ball, then Allegri’s organization may actually seem to work. Think of it as a 4-3-1-2 when we have the ball and a 4-3-2-1 when we don’t. He was simply an upgrade over Ronaldinho, maybe not with his passing, but his movement alone in the first half gave Napoli trouble to find him and stop him when on the ball.

Pato was not as successful, and it had nothing to do with him not seeing enough of the ball. At times he appeared immature on the ball and immensely selfish, almost preferring to score himself instead of slotting the ball to Zlatan. Is this a striker’s mentality? Of course it is, but that mentality is tolerated when you can’t stop scoring goals, not when you can’t seem to do the simplest things right. It is hard to advocate giving the Duck some time on the bench because his pace is electric, but with two difficult games on tap, Allegri will have to be sure to keep all three players fresh. It is also important to wonder if Zlatan's presence is forcing Pato to press the issue a bit and complicate his rather simple strengths of pace and finishing?

Now I am not going to advocate a Rafa Benitez style of rotating players, that would be suicide, but with two games being very important to the progress of the team, Allegri has to consider using Prince, Rino, Ambro and Flamini in each of the games, and in positions for them to be successful. But in the same sense the upcoming match against Juventus has to be a priority. Juventus is coming into this game with an impressive attack, albeit inconsistent. Delneri is using his attacking style, wide 4-4-2 with Juventus, the same formation that gave Milan trouble against Sampdoria. Yes the danger on the right side in Krasic may not be present due to a suspension, but I wouldn’t rule out Juventus just yet with the loss of one player. It doesn’t help that they were embarrassed by a 3-0 defeat last season in this fixture and will be keen to reverse that result. 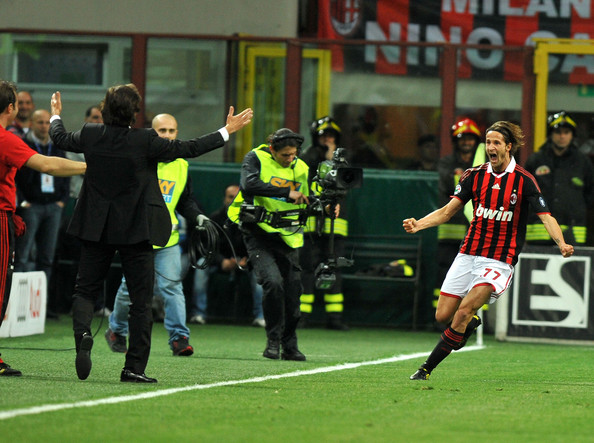 Defensively Juve are not as formidable as in the attacking stages, especially if their fullbacks don’t retreat, but the CB pairing of Chiellini and Bonucci are formidable enough to cause problems for our strikers. It will be up to Allegri to create a trident that can use a bit of pace and strength, and my suggested line-up will take that into consideration. It is also important to put pressure on Delneri’s lone DM, be it Melo, or anyone else he chooses. It is odd to advocate breaking down Juventus on the counter because we lack the pace to do so, but if ever a team was vulnerable, this is the one. With Juventus attacking wide midfielders, full backs, two strikers and an attack minded midfielder it opens up space in the back that Milan absolutely need to exploit.

So how do a team of snails exploit an attack minded team like Juventus? It all starts with winning the ball in the midfield, and getting the fullbacks forward and Robinho or Pato checking back to the ball for a quick pass from Pirlo, or playing Zlatan who can face the goal, attack the CB’s with the ball at his feet and create space for Pato and Robinho to run into. Done properly Milan can attack the exposed flank and hopefully create some chances on our old friend Marco Storari.

Personally if I was Allegri I wouldn’t change a thing from the Napoli match. Hopefully Silva can replace Sokratis and Antonini can go back into LB, but it still leaves a hole at RB and the difficult choice of the two workman midfielders to operate alongside Pirlo. With Rino giving 110% percent against Napoli it may be best for Flamini to get a start, and if Ambro is fit he may be able to give Prince a break for the Madrid match as well. If Ambro is not fit, he can wait until the Madrid match, but then it will severely limit the use of Prince as he will have played 180 challenging minutes in less than seven days. So my plan is as follows:

I know the most shocking surprise is Oddo, but the old saying stick with the hot hand, has never been more evident, and his legs may have a little something more to give than Zambro or Bonera, and making leaving one of them fresh and ready to play against Madrid. As much as I don’t want to see Ronaldinho or Seedorf, depending on the progress of the match, one of them will have to give a reprieve to the three attackers, but if Pato doesn’t make progress in this match, he should give way to Pippo for the match against Madrid. Matches against Juventus are always special, and I am sure Aaron and Roberto feel the same way, so make sure to check out their preview as well. 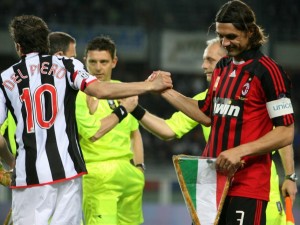