I know I spent much of the last tactics piece advocating for a 4-4-2 but then a comment from a reader, LaLaLucio, and a viewing of Napoli's Europa League tie against Liverpool got me to thinking...

Napoli play in a 3-4-3, which at any given moment can morph into a 3-4-2/ 3-6-1, this presents a very unique challenge for a Milan team and a Milan midfield that is often only 3 players being forced to potentially work their way through at minimum 4 players or maximum 6 players depending upon the passage of play. This is a pretty daunting task for any team, but take Milan's aging midfield into consideration and such a task becomes insurmountable. Immediate conventional wisdom of a casual fan will say, hey Napoli only has three defenders that means we should play three strikers, neglecting to take into consideration the defensive quality of Napoli's wing players, Maggio and Dossena, and the fact those strikers will never see the ball because of the numbers battle lost in the midfield. So what to do?? 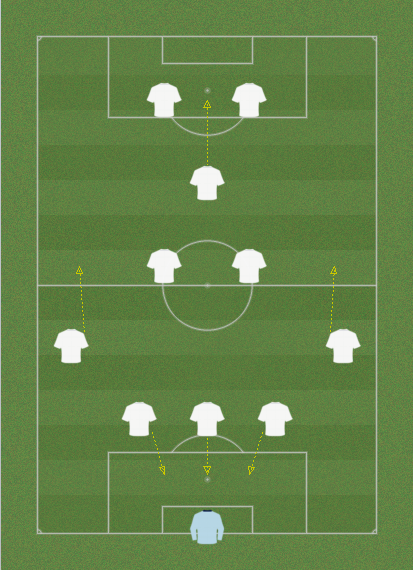 What better way to fight for possession and position against a four to five man midfield than matching their numbers evenly. Yes, you read right, I believe Milan should match Napoli's midfield heavy lineup with a five man midfield of its own. Crazy? Lunacy? Suicide?

Frankly I don't know, but considering the disinterested and poor play of late from the team, and the inability to maintain any sort of possession, I don't see why this drastic move can't be considered. Is it likely? Probably not, but I think it should be considered. At this point what is there to lose and how can our play get much worse from the trip to Madrid. The key to a five man midfield is most importantly your wingers, or wing-backs as they are commonly known, Milan have two players suited to this role in Abate and Antonini and they can match the pace of Maggio and Dossena. Their responsibility will be to provide width but to fill in behind the ball when Napoli are in possession. This will limit space for Cavani, Lavezzi, and Hamsik to wreak havoc by presenting a five man defensive line in the attacking stages, but will also provide a lot of traffic for those players to have to contend with in front of the Milan net.

The remaining three midfielders, most likely Pirlo, with a duo Rino/Prince/Flamini/Ambro, can operate in the center of the park with the two DM players operating as ball hawks closing down the ball and Pirlo collecting it from them and looking for passes wide or forward. Defensively the three CB's can be a combination of whoever is healthy, but if you consider that Sokratis played in this system last season, Nesta has done it as well, it won't be a catastrophic change and may actually give them confidence and a reprieve because they would not be required to move forward as much with the amount of players filling in space in the midfield. Finally the attack, the perfect combo for this has to be speed and strength so Zlatan should pair with Pato or Robinho. The smaller forward can act as a runner when Zlatan collects the ball, or even potentially get onto the end of passes from Pirlo and play a one-two with Zlatan or the wide players. We certainly won't be as one dimensional going forward by default, as different players can collect the ball in different areas of the attacking third, but we may struggle to get numbers into the attack, but seeing that it is a trip to the fortress of the San Paolo maybe setting up for a draw is not a bad thing!

In the end I know this suggestion is a bit outlandish, and unlikely, but if you think about the team as whole; the lack of depth in certain places (fullback and attack-minded midfielders), this is a good way to mask the fullback problems, add bodies to the midfield, and force opponents to really have to work hard and pass the ball around us on the pitch. This game has always had special meaning for me because of my family's origins from the area, and as a child I had to contend with many of my cousins and family members telling me I should support Napoli and more importantly Diego Armando Maradona, but no dice, I made my choice and never looked back, but nothing like taking points and smiling knowing I made the right choice. 3-5-2, 4-4-2, or anything but the 4-3-3, but whatever Allegri chooses it is imperative it is a formation that puts the team in the correct balance and gives them a chance to be successful on both sides of the ball.