I am still in a state of disbelief, before the match I simply called for some balance. I even suggested that maybe, just maybe, Allegri played with 8 or 9 men behind the ball that this team may have a fighting chance or lose two nothing, and here we are. Uncle Fester wants to remind us so often that Milan is inferior to know one with the attacking prowess of "great champions" like Ronaldinho, Robinho, Zlatan and Pato; the problem is, it has become increasingly evident that playing all those champions is nearly impossible, and playing three of them in matches like this one is virtually suicide.

It is rather befuddling to me that Allegri would not swallow his pride and put out a team capable of defending, but unless Robinho or Zlatan were willing to play RB and CB there was little to nothing he can do to solidify the back. Sokratis? Yepes? Gooch? Janks? Oddo? Thanks but no thanks, two out of the five have never even seen a CL match, let alone one at the Bernabeu, while the other two make Zambrotta look like a God. All and all, the lack of defensive depth is evident. I have to admit his choice to play both Dinho and Seedorf, when it should have been one or the other is just as bad, especially with a Boateng on the bench, but even then you are fighting an uphill battle trying to defend an attacking team with only seven players behind the ball. This match called for five midfielders and limiting Madrid possession, instead it was the same old spread out awful deployment that has become a characteristic of AC Milan this season and last. 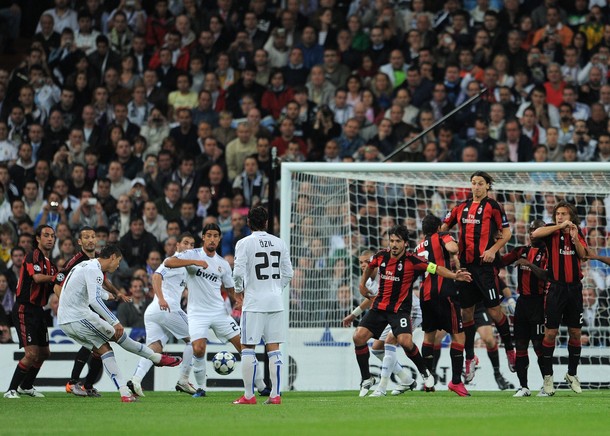 As if the lineup was not foolish enough, the execution of the players was just as bad. As soon as I saw the wall open in fear of a CRON blast, it was evident that the players on this team are not playing for the team or willing to do what it takes to win and if that is not a sure fire sign that it is time to rebuild, than I don’t know what is…

With that said, the individual performances were all lacking, in 2007 Rino Gattuso made CRON look like a child, on this day CRON returned the favor and with the help of his teammates gave Milan a sound beating on par with the defeats to Arsenal in 2008 and Manchester United last season. Madrid dominated possession and had close to 25 shots on goal, while Milan chased the ball, rarely pressured high up the pitch, and couldn’t string together more than five possession passes at any given point. Credit has to be given to the opponent on this day but more importantly to Jose Mourinho for proving that even a team with an attacking presence can be balanced and capable of winning possession and keeping it, granted Milan did little to prevent this domination in the 1 v 1 battles of the match, but take note Allegri and the three attacking players who seem completely unwilling to pressure the ball even a few feet away from them. 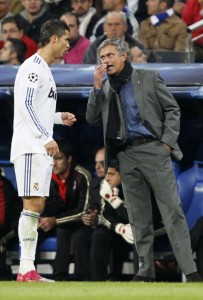 As I watched the match, listened to the commentary, and paid close attention to Real Madrid, it is starting to look like Mourinho’s self declared “work in progress” is going to be his third successful team, if not this season, but very soon thereafter. As a fan of the game I would get used to seeing images like this in Europe, and hope that the rest of the World takes notice as well because it will only be a matter of time before these two flaunt their skills at the World Cup.

I want to end with another image, and this one says a lot. I want to share a tweet from the folks at BeyondthePitch and ESPN analyst Janusz Michallik:

“It ‘s over for Dinho in Europe. Can’t compete any longer and if you watched TSOs (The Special One: Jose Mourinho’s) classy move when he was subbed, said it all. Grazie Ronnie.” 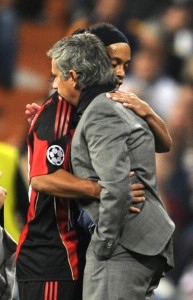 The question is will Allegri be able to see what Jose Mourinho and much of the footballing World has already seen…but not just for Ronaldinho but for the rest of this squad? Allegri can’t do it alone, a lot of this has to come from management as well, but I fear that our summer of strikers will set us back a few more years to come…unless a fundamental mentality change is made by each and every player, this team will be inconsistent...play within their means both physically and tactically and hope that something breaks through as a bright spot for the future.