As I write this I can’t help but wonder what the extent of Silva’s injury is to his lower left leg. Sprained ankle? Simple precaution? Ligament damage? Breaks? All these questions could have simply been avoided if Allegri did not roll out the best 11 players he had for this match against Chievo. I know that hindsight is always keen, and that "what if’s" will kill any player or manager, but to think this type of injury could have happened to anyone on the pitch, his lineup selection is a little puzzling with Madrid on the horizon and a crowded fixture list to follow.

What is even more puzzling for me is the inclusion of Bonera?? His choice not to include players like Onyewu, Strasser, or Sokratis on the bench even is just plain silly. World Class teams and contenders have 16-18 first team footballers who can contribute in any game or situation, but as the season wears on it appears more and more like Milan have 12-14 players that the Coach trusts and calls upon to come off the bench. Is it the Coaches’ fault, maybe management, or the players not asserting themselves? No matter where you lay the blame, this team will never be able to compete on the desired fronts without players on the bench who can match the quality of the first team.

In the 70th minute Allegri decided to call upon Robinho, this move coming with a two goal lead and for Pato, while Zlatan remained on the pitch. It was with this substitution that Milan went to absolute shit. Zlatan, who was asked to play the full 90, did in fact find the net, but he did so in the wrong goal, and following that goal Chievo dominated possession and play leaving Milan a team desperately holding on for a lead, instead of closing out a game the way a good team should. It was more or less an issue of balance as it always is, and with Allegri stupidly deciding to stick with the 4-3-3 the only real chance Milan had to win this was to attack and while they did so with some success the finished product came in the dying seconds, and with every failed attack came another wave of Chievo pressure. Hey Max, ever consider Prince for Pato?? 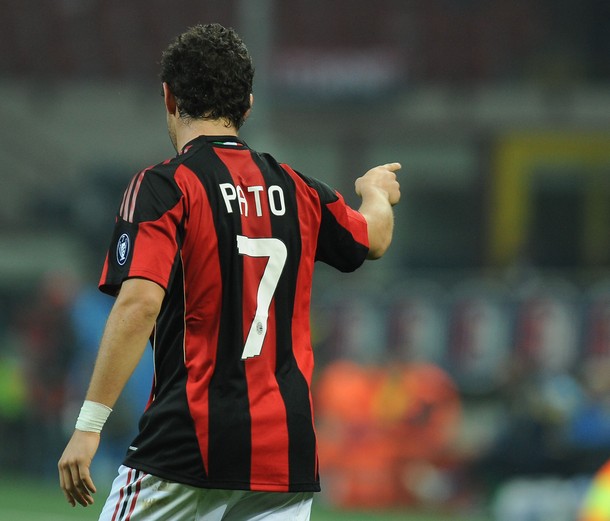 Yes, Robinho got his first goal in the Red and Black, and oddly enough kissed his third emblem in as many seasons, but the single positive one could take from this match, as a Milan fan, is merely the three points, the rest was utter disappointment. Instead of a flat out dominate 3-4 goal win and confidence building shutout, it was a nail biting affair that didn’t allow rest for any players, or a glimmer of hope that this team was turning a corner. Outside of Pato’s first half there were few individual performances to be pleased with. Robinho, Zlatan, and Ronaldinho did little to assert to themselves on the game outside of a few moments and their inability to make the simplest of choices, ie when to press and forward and when to possess where very disappointing. 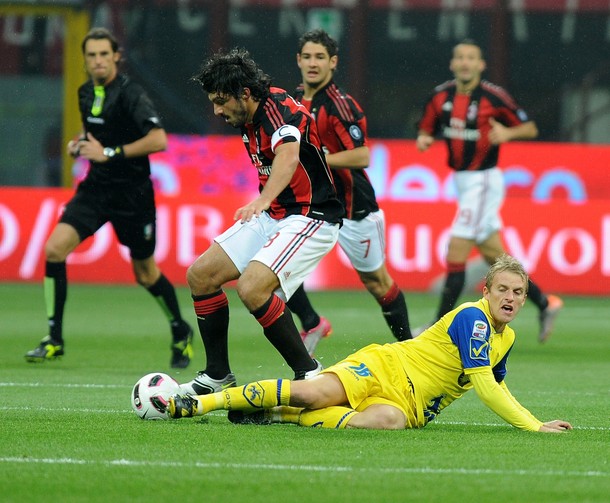 As Chievo attacked it was also evident that we lacked balance in the midfield a very real problem for this team and because of it the defense looked disorganized and the midfielders were reduced to chasing the ball instead of tackling or winning it. Seedorf was an absolute ghost while Rino ran and ran with nothing to show for it. All and all and disappointing performance leading up to the biggest game of the season, and yes a win is a win, and for that I am surely pleased, but in a match that could have gone so differently Allegri has lost a first choice CB, a chance for a dominant performance, and even more respect for himself and the team…a debacle if I have ever seen one.