La Befana delivered us a present today, the first fixture of the holiday return is historically friendly to the Rossoneri, but today was a gem. To say that we won after missing a PK and going down a goal is one thing, to say that we scored five goals and won by three after those circumstances is truly a gift!

Today’s performance will surely be a good discussion piece with opinions regarding performances probably touching all points of the spectrum. As a whole though it is difficult to argue anything worse than an above average game for the Rossoneri, despite a few errors the team continued to play its game and was rewarded time and time and again for good runs and great efforts. Considering how many times this team has been burned by defensive mistakes such as those by Abate and Nesta today, it was nice to see the offensive smile, nod, and bail out the back line quite nicely. 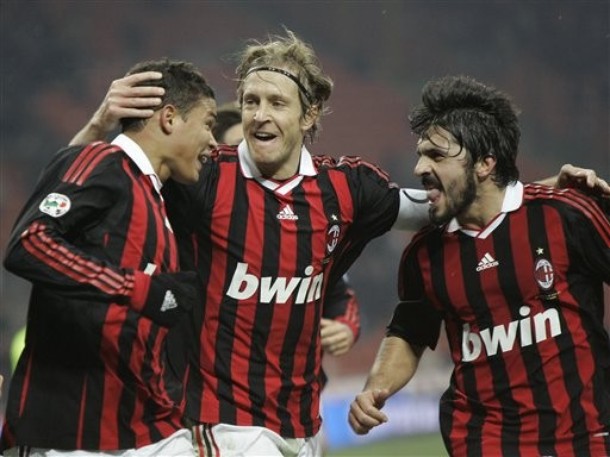 The one thing we can probably all agree on is that Ambrosini was surely man of the match today. Performances like these could render Seedorf obsolete and his movement, determination, and sheer will was incredible in the first half. To earn two PK’s, boss the middle, and get back for some good tackles on the flank really showed how game Ambro was, and really proved his title as Captain of this Club. At times I found myself screaming for him to shoot in hopes of getting a goal he very much deserved but his pirouettes on the ball, though not all successful, were just a sign of how confident he truly he was against a solid team who today appeared to still be on holiday for close to seventy of the ninety minutes.

Today also gave Leo a chance to see how truly capable Pirlo still is when flanked by two DM’s instead of the normal one. This flexibility was a direct result of playing Beckham high on the right, and allowed for a good strong level of balance across the pitch and never really forced the wingbacks to extend in a way that was detrimental to the team as a whole. Beckham played well early but still looks a bit lagged and will hopefully improve as he integrates more into the squad.

As I read through the comments I noticed some negatives sentiment toward Rino and Abate. While I will admit Abate has A LOT to learn about defending in general, his pace is a breath of fresh air, and experience in the position is really the missing piece to his game that he will need to improve. For Rino’s first game in what seems like ages, it was nice to see him not get a yellow card, but also to win tackles time and again. We sometimes forget that his role is rather thankless and the less you hear his name and the less time he spends off the ball the better. His passing left room for improvement but his game was not catastrophic by any means and is a good building block on his way back to full fitness and more game time.

Now here is where we may disagree a bit, but oh well, opinion is what it is. Ronaldinho today was abysmal, he ran less than normal, didn’t win a single one on one run, and the fact that he got a second bite of the apple on the PK was really his only redeeming quality of the day. His interchange with Antonini, who is full of running, continues to grow, but for that partnership to be successful it needs to look more like two cogs moving in unison, emphasis on moving, rather than one cog standing still while the other orbits. Thankfully Leo left him on the pitch to sort things out, and he seems to be the type of player that needs some time to get going after a break, and for these factors I am not all that concerned. He is a big part of this team’s potential success, but this type of performance in a loss would be unacceptable and won't win any love from Dunga and the Selecao. 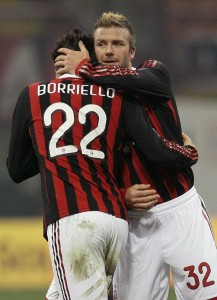 On the flip side I do believe Borriello had a solid match and his performance goes beyond his two goals, granted one of them was offside, but his early move with Becks was pretty smooth and he set the table for some solid chances. The goal from Dinho’s pass and Antonini’s run was really very nice, and if you had a chance to watch the FSC broadcast, they replayed the move from above and any footballing aficionado could see the interchange and movement between those three was fantastic. What he lacks in sheer technical skill with his feet he makes up for it in effort and running off the ball, even if he doesn’t receive it he forces defenders to cover and creates space as shown with the Ambro runs as well.

As I tail off here I do want to raise one more perplexing point; Leo’s subs? While I was happy he used all three I can’t help but wonder what his plans are for the weekend? Will Ambro start against Juventus? If so shouldn’t he have come off? Does Becks play if Pato is fit? I understand using KJH in this game, but wouldn’t this have been a great game for someone like DiGennaro or Strassser to get thirty minutes? Again I don’t truly know what his plan is for the weekend, but if he plans on starting the identical lineup to today, which is a strong possibility, I feel Ambro could have been rested.

Today was the first time in my twenty five odd years that my cousin from the boot and I were able to watch a Milan game live with my father. We discuss Milan often via phone, Skype, and email, but today was truly a special first and the result will be remembered for some time to come. Unfortunately for Alessio and Roberto the clan remains together for Sunday’s match and I hope my dream of six point week can come true.