The 69th minute of this match seemed to last forever, a poor poor run of play from Antonini to Janks to Rino and suddenly Udinese are back on the prowl. DiNatale looks very good on Zambrotta but retreats back, Milan win possession and earn the first corner of the second half and the minute finally comes to an end. It wasn’t so much the minute itself but this feeling of slow motion play and a distance that I can’t really explain from the team and the match. It almost felt surreal as I waited for Milan to pick up tempo, or string some passes together but time just ticked slowly away and nothing happened.

To say the squad looked to be in disarray was an understatement. It appeared the squad had regressed all the way to the dreadful September and October that many of us have tried to forget. Every touch, every pass, and every run was just plain sloppy. Leo’s subs were the first indicator of his disapproval as as both DiGennaro and KJH made way for regular first teamers in Pirlo and Borriello. The KJH bandwagon since the Catania match has clearly run out of steam, and his substitution was more of a merciful withdrawal from Leo than anything else. DiGennaro, supposedly en route to Livorno after this match, had some good touches, most notably the one right before he was removed, but otherwise it was indifferent play to mirror the rest of the squad.

Really the decline or just plain lack of interest from the squad is the most alarming. In ten or so minutes I counted something like five long balls without any real build up or movement forward. This team looked more like one of dejected desperation than a team capable of passing, possessing and attacking with real skill. Was it the lack of Ronaldinho? It can certainly be argued, but the first team can’t certainly play every match and the rest of the squad has to stand up play when called upon, or to be perfectly frank, they are not worth keeping around if they can’t.

Around the 75th minute or so I had resigned myself to a loss, with Borri coming farther back in the Milan end than a striker should, and so many hands up with players looking for runs or an open man to pass to who just wasn’t there. The real icing on the cake was that Udinese looked good, dangerous, and pacy, a team sitting one point out of the relegation and Milan made them look awesome. I want to find some small positives but the negatives are just too hard to overlook. Antonini ‘s mistake leading to the goal was piss poor, and the pass to him from Kaladze was even worse. Flamini and Zamrotta were ghosts on the right and DiNatale made them pay for it, and if and when they did run it appeared they were wearing boots made of stone. Pirlo could have delivered better passes from the bench, and Pippo didn’t really have a touch worth anything for the whole game. 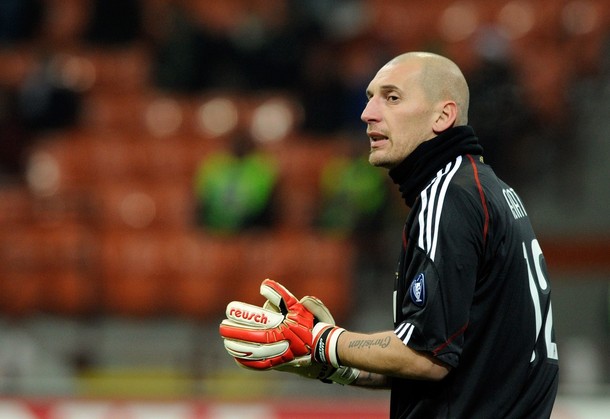 I guess if I had to stretch to find one good thing, it has to Abbiati’s first half, keeping Milan in the game, but being let down as his efforts were wasted. He kept a few good chances out of the net, but had Udinese been more clinical the score line could have been worse. Verdi also had a nice little run out, showing confidence; but even he frustrates me a bit because he is just plain small in every sense of the word. Why is it our most promising striker prospects are so short? If we bring back Paloschi and stand him on Verdi’s shoulders we probably won’t even hit six feet!?!

To say I am disgusted is probably as close as I can come to my feelings. Maybe it was derby hangover, maybe they underestimated a team so close to the drop zone. In the end Leo has to be better at recognizing, motivating, and just plain getting these guys in gear. This type of play can’t continue, and if it does our little win streak in the end of 09 will be a lost cause. It has been a sobering few days, and I am sure we can all relate to our plummet back down to Earth, let’s just hope this is the bottom…