To single out a specific player or two for this poor performance would be too kind to the rest of the squad. It also does not recognize the caliber and quality of our opponent and their coach, sure you can blame Borriello, Dinho, and Abate for their errors, but in the end the team was soundly beaten and for ninety minutes, a man up or even two, I never once had a feeling that this game was winnable, let alone mustering the strength for a point. With this being said, a whipping as sound as the last match, with a more favorable score line for the eyes, it was Inter that was the better team. 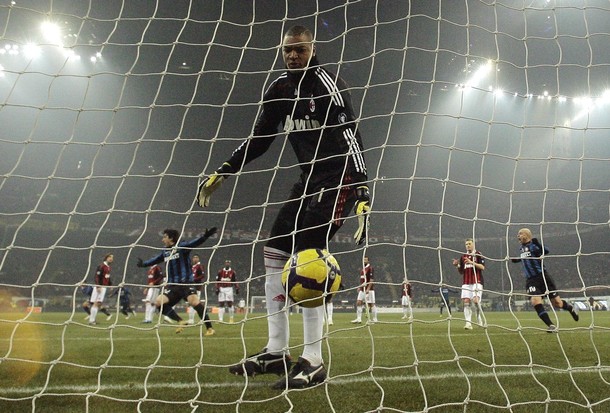 Today was a real measuring stick for our coach and squad, and while it may sound like an oxymoron to call our squad young, it was truly a man vs child in every aspect. It started with Leo versus Mourinho, Mourinho showed today why he earned, or just plain named himself the “Special One,“ he systematically neutralized every threat the Rossoneri had, and while it was no secret that our game is to attack, his defenders bottled up each and every foray forward with a strength and cohesion that resembled an iron curtain. For every move, Borriello was double covered, for every run Ronaldinho was pestered, and even in times were Maicon was caught going forward, Muntari and Cambiasso were back to fill the gaps and close space so seamlessly it almost appeared Inter were defending with ten men.

Even a casual fanboy could have realized in the first 15 minutes or so that Wesley Sneijder is a danger man of epic proportion, and much like the last Derby Leo and Co. had no answer. Rino and Ambro just weren’t quick enough, and even if Flamini had been fit, there was little chance that Sneijder was going to be stopped, his release and vision are amazing and his work rate supports the runs of strikers in amazing fashion. I can't help but think what we could have done if we bought the right Dutchmen from Madrid, The only chance Milan had was his Red Card, rightfully deserved I may add, but in the end that card only added fuel to the fire of the Inter steam engine, as it continue as though not a single piece was missing and galvanizing the already us against the World conviction which with they played.

As I re-watch pieces of the match again, I lack the intestinal fortitude to watch the whole thing, I can’t even believe or say that Nesta would have helped today. Milito’s first goal was a top shelf finish and while we can blame Abate all we want, his pace allowed him to keep up, something Zambro or Oddo could never have accomplished, but his lack of experience on this day proved his undoing. You can all call for a new RB, frankly if anything we need cover on both flanks, but considering this was Abate’s eighth game starting at RB, a game of epic proportion, one has to swallow the mistakes if your commitment is to the player. He will learn, but the process will not be as instantaneous as some would like.

On the same flank Inter started a youngster as well in Santon, and instead of pressuring the kid into tackling and playing hard, Milan insisted on running the attack through the left flank. Instead of attempting to use some of Beckham’s experience and guile he was rendered rather useless and as pressure mounted on the side late in the game you could see the significant difference in the strength of the flanks; the blame rests squarely on the shoulders of Leo for not recognizing this. Could he have played Clarence in that top right spot at half? Of course, would it have been any different? Probably not, in the end the personnel on the pitch was plenty capable to pressure Santon and his flank, but in the end they gave the kid a free pass. 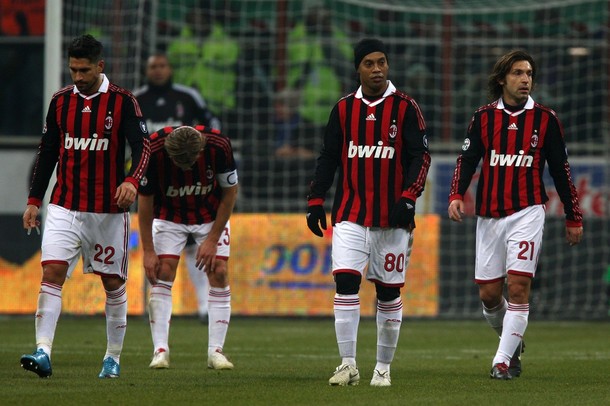 On a day where our Club came very close to touching the top we were only shown a glimpse of the path needed to reach that level. For Milan we are merely reminded that there is work to be done, that we are good but not great, and a preogression to be achieved. Where Inter brings in Pandev to fill a void, Milan purchase Adiyah, were Inter can turn to seasoned veterans like Matrix and Cordoba at the back, Milan turn to aging veterans like Favalli. When the pressure was the greatest their coach sent them to battle with a strong tactical plan and quite confidence, where the Rossoneri crumbled. While the scudetto hopes are now merely an unrealized dream, there is no reason this team can’t pick itself up again and continue pressing forward, there is no shame in second place and assuring a CL place is now a must. To borrow a sporting cliché, seems like I have used a ton this week alone, it is not how a team falls, but how it picks itself up, and I know this team is stronger and more capable then what they showed on this day, and our day for revenge will come, maybe not even next season, but when it does we will all remember days like this, and we will give Inter the ass kicking we are all hoping for…

FORZA MILAN PER SEMPRE, it is always easier after a win, but even more important after a loss.