Share All sharing options for: Juventus 0 Milan 3, A Proper Review

I can’t sit here and honestly say that Milan played Juventus off the pitch. I also can’t sit here and say that this match was everything it was cracked up to be and true showpiece for Serie A because that is far from the truth. In this end this match was a bit a of "war" so to speak, with both clubs needing the points, for Milan a chance to stay close to Inter. For Juventus a bit of redemption and to show that they are not on a downward spiral out of the top four. In the end though the weight of the match got to Juventus, and it wasn’t so much Milan playing their best football, but Juventus clearly playing some of their worst. If you want the real Juventus perspective you know where to go, and I am sure those guys will be have a lot to say in order to make some sense of the poor performance, but we have talked numerous times here about winning ugly and this was just one of those games.

From the outset you can clearly see the nervous energy on the pitch for the Rossoneri. If you stop for a moment and think about the starting eleven, this was easily the most important match in the careers of guys like Abate, Antonini, Silva, and even Borriello who up to know have played in CL games with some meaning, Zurich, but not in this magnitude of importance for Serie A. The victory solidified Milan’s hope for a run at Inter whose lucks seems to know no end as they were able to take three points against a Siena team who fought tooth and nail only to be drop points to the league leaders. If the magnitude of this result has not set in yet, you need to look no further than the team’s celebration following the final whistle and how much it really meant. Thankfully though Milan always has a veteran presence, and on this day it was the “Jurassic 3,” so nicely named by Michael in the comments, of Rino, Ambro and Pirlo, that provided a huge boost in the middle of the park for Milan and proved that while youth is nice, it is experience that wins battles such as today. 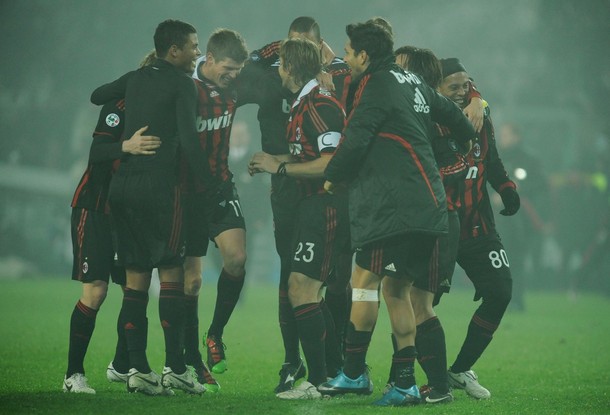 Upon first glance a casual fan would say Milan thrashed Juventus 3-0, they were clearly the better team, but opportunistic is probably the better word. Outside of Chiellini, who was for me the MOTM in a losing effort, the Juventus defense looked atrocious, three goals, three horrendously marked corners, in what should be an embarrassment for a such a majestic defender turned Coach, Ciro Ferrara. Captain Canna has clearly lost his trip to South Africa and if Lippi didn’t take notice, then even Italy deserve Juventus’ fate. Borriello clearly had the upper hand against Cannavarro, and it was Chiellini who bailed him out time and time again, and really Borriello who did little to capitalize on the mismatch.

As for Borriello he continues to do dirty work; to the point that he makes me wonder if he even wants to score anymore?! He held the ball so much today it made me want to scream, making wrong decisions time and time again passing to late or not at all. He still finds himself in great places, and his runs and control are clinical, but on a day where he could have scored, or better, created a few for his teammates, he should have done better and put Canna to pasture once and for all in the Azzurri setup.

It wasn’t all bad though for Milan, and while Becks and Dinho were also fairly inconsistent they were both able to capitalize when given opportunities, which justified Leo’s lack of subs for the two wide strikers. While neither one was outstanding by any stretch, neither was poor enough to be detrimental, and both of them guilty of mistakes. Credit should also go to Leo for sticking to a rather creative 4-2-1-3 which paid dividends midweek and continued to do the same today. It was Pirlo who benefited most from the new setup and really looked at home behind the offensive line. He dictated play, moved nicely, and was passing the ball like his old self. It sure helped that Rino was back to his tackling best, but his match fitness, or lack thereof, is clearly apparent, but it served his purpose today. He could have easily much simpler football instead of trying speculative passes time and again, but Juve did well to force him into those passes early and make it apparent that his only value on this day was solely defensive. Ambro continued his good performance, and "earned" himself next week off with a booking, a great way to force Leo to get him some rest as even he looked exhausted by the final whistle.

While I piled heaps of praise on Chiellini for his gutsy performance, it was our own CB Tiago Silva that was the real MOTM for the winning side. For every good tackle and foray forward for Chiellini, Silva matched him in a little game of anything you can do, I can better. He was quietly confident disposing Amauri, Diego, and anyone else who came his way, and still found time to have two great shots on goal, and provide support in the box for offensive and defensive corners. We all know Nesta looks really good, but I can’t help but think it is Silva that is giving the old man some new legs. Easily our best signing since the arrival of Kaka, and while I mean no disservice to Pato, his consistency and top class effort speaks volume of the player. If anyone is wondering which Rossoneri Brazilian's will be going to South Africa, look no further than Tiago Silva. 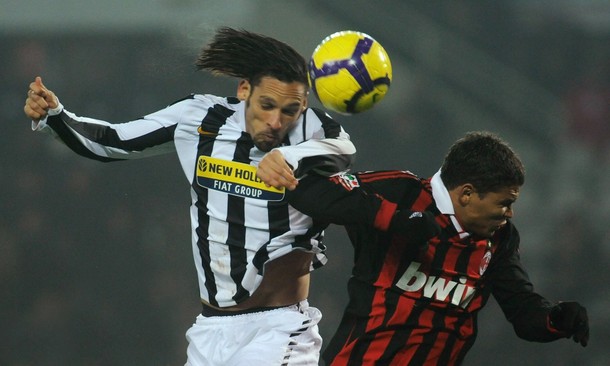 I do want to say one more thing about the defense, specifically Antonini and Abate, while neither of them was superb on this day, the performance has to be considered a confidence boost to both players. They made their errors, but Leo showed faith, a faith that should be rewarded with confidence on the pitch and a continued improvement for both. Their pace makes a world difference and while they may not be World Class, they are growing, and that growth will only make Milan stronger as they make a run for the Scudetto, and what is looking like a promising second half of the campaign. If the wingbacks are solidified, then resources can be diverted to the midfield and depth on the bench to continue to make Milan stronger.

It is amazing that a few months back this team was DOA. Now we are the only thing standing between Inter and their title and with a game a hand a looming derby I can’t help but be excited as a fan. Inter fans may say that their team is superior, but they have had luck on their side this campaign, and the Milan they are going to face in a few weeks is a shadow of the one from the first derby. While we cannot overlook matches against Siena and Fiorentina, the goal of six point week has been completed and the next step and six more points is right around the corner. 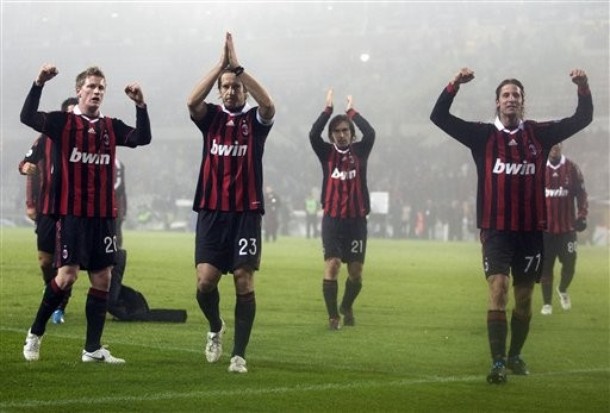