I want to start off on a positive note here and say that much credit goes out to Leo for today’s tactics and lineup. Abate at RB was a masterstroke and maybe he is actually reading the blog, he would do well to do so as we can be pretty insightful! His substitutions at 60 minutes arguably a glaring problem for Carletto were pure genius. Versatility like that of Abate and Flamini open the door for these changes and allows the formation to be more pressing and attacking. Adding Pippo for the statue of KJH was also a plus as Bolonga were having marking the wily old striker.

I want to start this post match review with Abate. I firmly believe that our new RB is in the form of Antonio’s favorite blonde bombshell. Speed, speed, and more speed, and it sure helps that the kid can cross and tackle. Yes I will take a deep breath here and mention that Bologna is not exactly attacking in bunches in Serie A this season, but it was perfect game to prove his worth. He may have to defend more against the big boys, but his progression should move along nicely if he is given the chances and confidence to succeed. He also allows Leo to sub in a RB behind him and move him forward in the attack in the same way Carletto used Janks last season.

Again it needs to be reiterated here that Bologna, though extremely compact and well organized in the back, do lack that dynamic counter attack movement. This did make the play of Pirlo, Ambro, and Rino a bit better than it has been recently, but each of them looked very game with Ambrosini do very well to break play forward. His pass to Seedorf out wide gave Clarence the space to score the goal and keep the pressure on Bologna in the second half.

It is also important to discuss the play of Seedorf, who in the past two matches has been lights out. His goal today may very well be the nail in Ronaldinho’s coffin, but Clarence’s fitness and ability to continue this pace are still very much up in the air. His patience, recognition, and comfort with his teammates is clearly evident as he directs play and helps lead the attack in and around the box. For all the time that Dinho was granted to “find himself” that was one huge gap that was easy for anyone not blinded the Dinho fanboy glasses to see. With Clarence in play it also opens play on the left hand side of the pitch for Pato to operate in. At one point today three different players, Ambro, Favalli, and Pato were able to operate from that left side that is usually marked off as Dinho country, which was also the place that the goal originated. I don’t want to make this a pro vs con Dinho post, but with the team playing like this it is not hard to come the conclusion, “Who needs Dinho if they can play like this?” 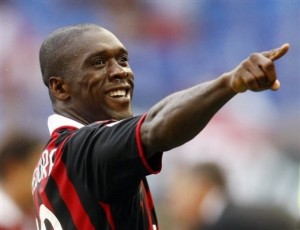 I was disappointed in the last ten of the second half as teams can pressure following a goal, and Milan would have done well to go for the second goal knockout blow. The lax played forced a beautiful save out of Storari, which was all the more amazing considering his lack of touches for the majority of the game. I was also disappointed in KJH, yes I understand he has to adjust but his time at Real was telling and it doesn’t appear he has shaken that stagnant style of play that doesn’t work when you have Pato alongside of you. I am all for giving him time, but his run outs have to be productive specifically with movement on and off the ball. We need him and performances like today will be unacceptable as the season progresses. You can say what you want about Borriello but he rolls up his sleeves and gets his hands dirty even if his name is not on the score sheet, which is a benefit for Pato as well…noticeably in the game against Siena.

Yes it was just Bologna, but the team hung tough and the coach pulled all the right strings. Udinese at home on Wednesday and it is time to keep ball rolling…FORZA MILAN. 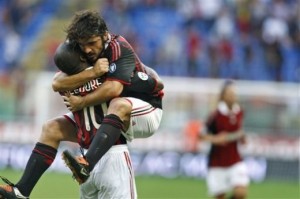