From the outset I have to say I was pleasantly surprised by Leo’s lineup. At this point Rino, Ambro, and Flamini are interchangeable and having them in place to do dirty work frees up space nicely for Pirlo to operate and with Seedorf at the top of the diamond it gives the team a more controlled and possession minded top. Pippo and Pato looked keen early on to have a say in the game with OM respecting Pato and also playing a high defensive line to allow Pippo to play his favorite game. Formation looked promising but the tactics and execution again left a bit to be desired.

The first fifteen to twenty minutes of each half was my biggest gripe and for this I have to pick on Leo. The early minutes of the first half saw Milan absorb a ton of pressure and OM looked poised to attack the flanks. Our lack of pace on the flanks seems to be a exploited by everyone and the more the DM wings shade into the middle the more space it allows teams to attack the wings. This becomes even more problematic when Oddo and Zambro decide to press forward. Oddo’s push seemed to be worthwhile as he created a few chances early that were not taken by the strikers. It was Clarence though that provided a touch of magic as he cut inside to slot a perfect pass to Pippo for a classic finish and his 67th goal in European leaving him two shy of the great Gerd Muller for the all time record. 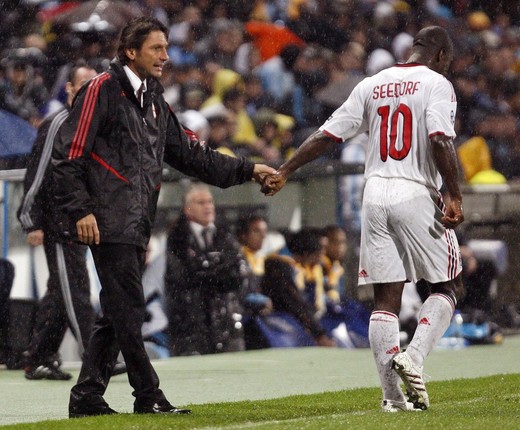 It was Seedorf early that I found to be the difference in the Milan play. He was tireless moving up and down the pitch a was so deep in the defensive end at times for good reason, which is a far cry from a certain player occupying that position in past games. His resilience on the ball and two hard fought plays led to both Milan goals which were both arguably against the run of play. He may not be the prettiest of players but his guile and gamesmanship proved the difference today in his performance, Pippo, the tifosi, and AC Milan truly have one man to thank for today.

Credit to Didier Deschamps and OM for really pressing the issue leading to the first goal and the majority of the second half, defensive lapses and shaky goalkeeping were all weathered to save the victory. Storari did his best Dida impersonation today with odd punches, and he was fortunate to see many of OM chances gone wide, but he did enough to seal the win coming off his line when needed. Today was statement game for Thiago Silva and the Brazilian was nothing short of amazing. There were times when I thought Nesta had bailed us out in classic Nesta style only to find that Silva had made the play. Also to the credit of OM was the fans who made the atmosphere final-esque even drowning out the commentators at certain times, truly a hostile environment for any team and Milan were fortunate to take the win. 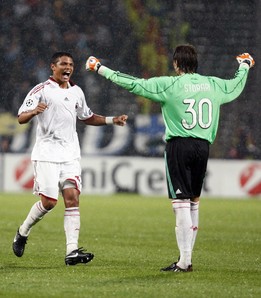 As with all victories there is always room for improvement. Pato was a ghost in the second half and while he made space and came to the ball in the first half, he disappeared in the second. He needs to continue to improve his recognition of play and decide when to take on or when to pass, he will continue to grow but his Coach needs to recognize these moments as well and make the change. This would have been the perfect opportunity for Leo to throw on KJH earlier and spell Pato. One could also make a case that Leo should have pulled Flamini in favor of Janks following a harsh yellow that could have very well been a red.

Again I will gladly take the victory and am pleasantly happy as I exceed my expectations for the match entirely. Play was sloppy, with lapses of concentration and defensive duties. I was also a bit unhappy with the amount of chances given to OM late, but these are some tactical growing pains that the squad can easily progress through. Some solid possession and attacks to the flanks can remedy this and keep opposition honest in future matches. Will this performance beat Real Madrid? Probably not, but I will take the confidence boost going forward and I am sure the squad and Coach will say the same.