Share All sharing options for: Thursday Milan Musings, A Guest!

Keeper, creator, and card carrying member of the AC Milan Offside Ultras, Avia, weighs in on AC Milan recent past, present, and near future. Avia who is always calm, cool, and collected, should offer a different perspective from the roller coaster of offseason emotions we have all endured!.

Sigh, well it’s been a heck of a summer folks, one long ass summer and I have to admit there have been few seasons which I have awaited the start so anxiously

From memory it all started with the loss of our venerable Captain. Regardless of whether you have followed Milan for the last 5, 10 or 15+ yrs we will ALL find it strange to watch Milan play and not see Maldini out there solidifying the backline 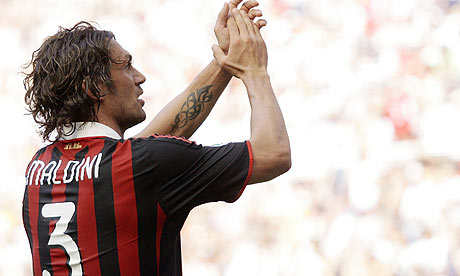 His retirement was made worse by the manner of his send off from the Ultras. Even here in the UK there was some headshaking at the fact that such a loyal servant was badly slighted on what was a historic & emotional event. To so publicly insult the figure who has given so much to your team is a complete lack of appreciation of the man and all his achievements in our colours. I for one STILL harbour resentment towards the Ultras responsible (the Brigate Rossonere for those who are interested) and still find it hard to comprehend their actions. Shame!

I’m sure after the loss of Carlo that there is a sense of impending doom enveloping many a Milanista (he did have his fans let’s not forget!). I for one didn’t have Leo at the top of my wish list for replacing Carlo and recent results have only been reinforcing the belief that we should have gone for a Hiddink, Rijkaard or Van Basten calibre candidate. As things stand Gian is currently more qualified to run the show at Milanello! I for one wish Carlo well at Chelsea and would like to see him spank the EPL, God knows, he has the squad capable of bulldozing its way to the right results

Again, his undoing imo may be the inability to get the right performance & results out of a squad who are more than capable of winning both a league and a CL final. Something else Carlo will now have to contend with is that his Chelsea squad is massive and player power has a lot on influence in the boardrooms in the Blue parts of London. It will be interesting to see if Carlo implements/drops his favourites regime at Chelsea as he attempts to juggle a squad of such quality with genuine contenders for every position

One reason why I won’t be missing Carlo is summed easily………..GOURCUFF. The whole manner leading up to and eventual loss of one of Europe’s most promising talents neatly packaged together some of Carlo’s lesser attributes for me, his stubbornness and inability to sometimes think out of the box. Remember how badly players like Pirlo, I-Cant-Believe-They-Havnt-Kicked-Me-Out-Yet-Dorf, and even to a point Kaka played last season? Meanwhile, over in France, Mr Cuffy was setting everything he touched alight. He should have never been loaned out in the 1st place and just as we struggled in the sharp end of our midfield last season and we look set to struggle again, AAAGGGH!

On one side we had a shrewd but self serving manager and on the other a kid with some natural talent that simply needed nurturing. Some may, and no doubt will, argue that by staying at Bordeaux the kid is showing signs of limited ambition but I say he is simply doing what is best for himself (just like Carlo!) but I’d be surprised to find anyone on this blog who doesn’t feel deep down that we could really use Gourcuff right at this moment and feel free to mark my words, in around 2/3 seasons time one of the bigger teams will snap up Cuffy and we will all see what could have been

Ah yes, then there was the selling of Jesus Boy! We may have seen the best out of him and it’s maybe even true that the last two seasons had seen him in decline but boy would I give anything to see him tearing down the field in Red & Black right now. His recent trip to Milanello on the eve of the Trofeo Berlusconi made me feel worse when the following words were attributed to him “We hope to beat Juventus,” he said to the fans. “We have to get the victory”

Damn those words are such a kick in the stones as he quite clearly still see’s himself as one of us. I’m an admitted Dinho fan boy but there is NO WAY the samba king can fill the boots of our former choir boy in so many ways

All I can say is GOD BLESS YOU RICKY! Again, I hope to see him do well in Spain (just not against us!)

Now if all this wasn’t enough to make you turn to whatever vice helps you deal with trauma we then had the Mercato to help heal our wounds…..

Cissokho, if we had simply included a dental facility as part of the medical setup at Milanello we wouldn’t have made total asses out of ourselves. I mean WTF, in the end the player ended up at Lyon for the same 15Mill Milan had originally said yes to!

I don’t know why we just didn’t throw some kinda exchange into the deal (Oddo, Favalli, Zigoni, Viudez etc) but regardless, it’s obviously a position the hierarchy felt needed reinforcing and as yet, has still to address

Then there was the Fabiano fiasco, fine, we didn’t get him but at one point there was possible talk of forcing a move through the courts? As much as I was glad not to see Milan get fleeced for (imo) a so-so striker, is THIS the approach Mighty Milan are taking nowadays with shady back alley shenanigans and envelopes of money changing hands?? This simply wont do Mr Berlusconi!

All this lead to me feeling that this Club is on its knees, and I’m sure that around this time some of you had either switched off, turned to booze, got yourself medicated (legally or otherwise) found another pastime to numb the pain that was killing the joy of following this great Club, but then there was the American friendlies by which time my depression had manifested itself as a stomach ulcer. I had to note that the tone on our beloved Milan Offside by this time had went south as there was a lot of infighting, personal vilification, general short temperedness with one another. Call me crazy, but I saw this as kinda understandable based on the summary of events you have just read but there is more

Full Backs: Janks was on the wane last season and it now looks like that maybe Zambro is likely to follow. Neither of these guys has been convincing in the matches played so far and even Abate’s crosses makes Janks look like he should be taking lessons from this kid during training. Antonini hasn’t been all out convincing yet and appears to be apprehensive in going forward maybe? Don’t get me wrong, he has been ok here and there but the overall impression i'm getting is what Shehan used to argue in that if he’s green he can’t be an automatic starter. Lets be honest Ants isn’t likely to be pushing for Santons place in the Azzurri anytime soon and still needs to clock up some match time as a sub before he can truly take that position for himself

I for one STILL hold out hope on landing at least one of the three Lazio “rebels” (De Silvestri, Ledesma, Pandev) before the mercato closes and I’m more than happy to ship over to Rome any of the following, ShitDorf, Oddo or Kaladze assuming Lazio will take them and we can get our player to agree as I’m sure we can get at least one of the wantaways relatively cheaply from Lazio

It’s easy to see it all as Doom & Gloom at the moment but lets not overlook a few silver linings in the clouds hanging over us.

Silva – Barring Maldini, most of last season was spent sticking pins in voodoo doll replicas of our defenders and highlighting each and every mistake they made, which is why I feel that Silva’s near constant solid performances in large have gone unnoticed. I went to the Rangers vs Milan friendly last year and even then he seemed cool and self assured. This was oh so different to the usual panic that seemed to hit our backline as everyone fell over each other in haphazard attempts to clear a simple ball. In the matches he has played so far Silva has shown himself to be a worthy teammate of…..

Nesta – He’s back damnit! From what I have witnessed so far Nesta is back and with a vengeance and not in the semi-skimmed variety, he has blown away any ides that he might not be the full product on his return. We just need to keep our fingers crossed that his back holds out (eek!) but he seemed to be happy to get stuck in against Amuari on Monday night

The above two guys teamed up with Abbiati look solid and I can (forgive me for saying this) see where Berlu is coming from with the recent praise. Yes, ok, we aren’t talking about the re-birth of the Baresi & Maldini era but the more I think about it, Nesta & Silva are pretty much one of the stronger CB combos in Serie A at the moment and will hopefully make Abbiatis life easier between the posts with Gooch and Bonera for back up

Pirlo – Pffft! Forget Dinho, if we need any one player to recapture past glories its Pirlo. I was a supporter of the notion of selling him to Chelsea as I honestly think he’s in decline but I noticed in the Benfica match that when he does manage to stay awake he is still worth rolling out onto the pitch (I just hope Leo keeps some adrenalin shots in his back pocket!) Pirlo with one or two deft touches can make an attack out of nothing and I’m kinda excited by the idea of Pirlo feeding balls through to newer players like Borriello and………

Huntelaar – All hail the new Van Basten! Well maybe not just yet, but the kid has an eye for goal and that puts him in my good books for now. My only worry is that when both he and Pato are on the pitch they appear to run into each others space (or is it just me?) Either way with his addition Milan actually has a strong line up in attack; Pato, Borriello, Huntelaar, Inzaghi, and hopefully we can ease some of the pressure off of Pato whilst giving Borriello the competition he maybe needs

Leo – He already knows he is on a steep learning curve but in both the matches against Chelsea and the win over Juve in the Trofeo Berlusconi we played some good tight pressing football. We appeared to have shed the inertia in our attacks and I honestly believe that all we currently lack is match fitness in some of our players

(Note to Mssrs Berlusconi & Galliani) Instead of jetting around the world making money in near pointless matches, a new manager should be left alone with his squad back in Milanello to train, train, train damnit!

I have painful memories of last season where I was just plain BORED with some of our performances but a new season awaits with a new guy at the helm, lets give him a chance to win us over or to darken our hearts!

I for one cant wait for the season to start