Welcome to the "Gooch"

Share All sharing options for: Welcome to the "Gooch"

I am stuck in two minds here. When I heard that "Gooch"was joining AC Milan I was shocked and surprisingly pleased. It was my critical football eye that spoiled my party, but even my misgivings pale in comparison to the upside of this move. Yes Onyewu can clear the ball better, he constantly gives up throw in’s and corners, but when your mids aren’t helping back a CB has few options. Yes he is a bit green, and lacks real big game competition outside of the USMNT Jersey, but then again so is our Brazilian Silva, who in actuality has far less, and everyone seems keen on him!? 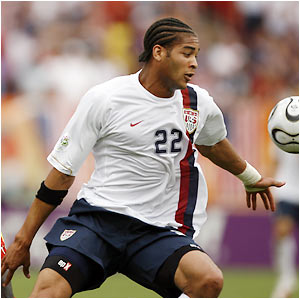 The best part of this deal for the club is the price, but outside of the bargain bin shopping, free transfer, and a cheap three year deal, this player may actually be able to contribute. With many factors making Onyewu far more capable than anyone wants to give him credit for, on a team where a guy like Digao was sucking up a place Onyewu adds depth to a position that contains only three actual players, and not converted outside backs. Silva, Nesta, and Kaladze will welcome a new mate, especially with the final two suffering through injuries and Kaladze even considering calling quits if his knee cannot support training and play. Playing Favalli and Bonera (who I actually prefer at CB to RB) out of position may no longer be a necessity and with Favalli being the only true LB on the team outside of Janks, he can add depth where it is needed more so than in the middle.

The purchase of Onyewu also comes at a great time in his career, at 27 years old he is prime to come into his own and be a stellar CB. Stop for a moment and consider the best at that position Ferdinand, Terry, Puyol, Nesta and even Canna truly blossomed nearer to 30, and with the right training and playing time Onyewu may also come into his own. Please note I do not expect to him become a World Class, CB, it would be great for Club and Country, but even a serviceable and strong CB would be more than many of us can ask for.

The last and sweetest part of this deal for me is the good old fashioned risk vs. reward factor. The man succeeds and Milan and Co. are geniuses! He fails and moves on and no one even remembers this discussion, factor in the cost and this move is a masterstroke. So while many of cite the comical “marketability” them which I will discuss momentarily, the basis of this move is far more simplistic than many of us though, frankly it just plain makes sense. As for the marketability of this move, I don’t think there really is any. Selling jerseys in the US for Onyewu is a lost cause, very few people follow the USMNT, and even if they do many of those people couldn’t tell you his previous club anyway. It is a sad state affairs but with important things like the World Series of Poker and Woman’s Softball taking up valuable time on ESPN, there will be little for Gooch to get some if any publicity at all. Best of luck to him, and having an American CB in Serie A, something we have not seen since Alexi Lalas, should be an interesting draw for fans across Europe to see what this “Yank” can do.