I think it is rather funny that I was going to run this Legends’s post on a day where the comments on the previous post were curiously Carletto related. You can say what you want about Carletto as a player or a coach, but his legacy certainly speaks for itself. 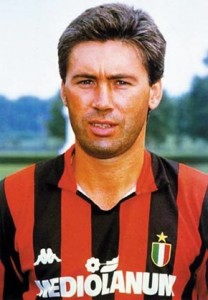 Ancelotti’s route to legendary status was twofold, as a player he gave 112 appearances in the Milan midfield during arguably the most fantastic run of play any club has ever experienced. He was an usher to the Milan era of success and played alongside some of the legends chronicled before him: Albertini, Donadoni, Baresi, and so on. Never the flashiest, fastest, or strongest midfielder on the pitch, Carletto was a pivotal teammate, much akin to Ambrosini in today’s Rossoneri. In one of my earliest Milan memories, oddly enough it is a Carletto who is the originator, with his goal against Real Madrid in the 1989 European Cup Semifinal (CL). His one-two move and shot were perfectly precise, and the rest remains etched in Milan lore as they scored nine goals and conceded zero in the two games leading up to hoisting the Trophy.

The second step to his legendary status came with his return to the San Siro. Some may argue that even if he didn’t coach Milan he would still be a legend, and yes it is debatable but what he did in seven seasons at the helm is more than enough and rivals many of the Milan tacticians before him. His road back to the San Siro was not very direct; in fact he stopped for some time at Parma and Juventus, where despite being rather successful in the win column, silverware became rather elusive. Despite this “almost” label Carletto returned to Milan to take over the job on the bench and have a very successful run.

He shedded the “almost” label in 2002-2003 as he led Milan to a penalty victory over Juventus and another CL nearly man, Marcello Lippi, a legend in his own right, while also winning the Coppa Italia. Soon thereafter Milan won their first and only scudetto under Carletto. This little fact is in fact a point of contention for Milan Ancelotti detractors, who claim that he didn’t know how to get the job done in the Serie A, and yes this may in fact be true, but a quick glance at the depth of the rosters he had and it can be argued that his teams were not built to compete on two fronts, and in fact only built to compete in Carletto’s bread and butter, the Champions League. 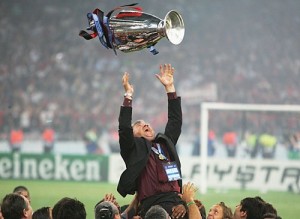 Following the Old Trafford win, Milan made two more appearances under Ancelotti in the Final. The first being the Istanbul nightmare, and the second being the redemption in Athens. With the victory in Athens Carletto won his second CL trophy in five seasons, and with a few quarterfinal and semifinal exits thrown in between. In his time with Milan he assured a spot in the later rounds of the Europe’s showpiece tournament with every chance he had, and eclipsed many of his peers as the master of the CL. So much so in fact that even Roman Abramovich of Chelsea understands his value and lured him away from Milan to Stamford Bridge where Carletto may continue his success in the CL.

Apart from his ability in the CL, what always impressed me about Ancelotti was his tactical sense and awareness. Again this was debatable toward the end of his career, but his Milan bench left him few options to the man. Ancelotti found ways to build squads around his stars, with Pirlo and Kaka being the most prominent. Ancelotti found a way to have these two work seamlessly, never more evident than in the 2007 CL. Under Ancelotti players like Pirlo, Seedorf, and even Il Capitano were given new leases on life and chances to succeed. He also oversaw the blossoming of players like Shevchenko and Kaka into World Players of the Year, and made such an impression on the likes of Gattuso, Pirlo, and Pato that many were willing to discuss following their Coach to his new home. 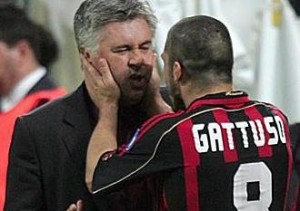 This legend post was bittersweet for me, knowing that Carletto is no longer a Milan man, and being fairly confident that he will do well at Chelsea with the players at his disposal. Sure maybe it was time for a change at the top, but I do not view the club in a better position at the moment, and the chemistry he created with many of his players will be virtually impossible to replace. Milan will move on, but his time at the club was greatly appreciated.

I tried to do Legend's post every weekend in the summer last offseason, but this offseason my life is a bit in hectic mess. I will try to get at least two more up this summer for Maldini and the Flying Dutchman, and next weekend I will have full coverage of Milan's trip to Boston to play Inter.