This game has always been an important and special fixture to me, even as a child I knew the importance of Juventus, the way the play and the respect they commanded. To some extent I was sometimes envious and jealous of the way they bough players, maintained an Italian core, and fought our Rossoneri for selection to the Italian national team and scudetti. Watching Milan play Juventus has always been a clash of history, nostalgia, schools of thoughts and institutions, far more than just a simple fixture. This resonated more than ever in the 2003 CL Final where I can still see Buffon sharing a laugh with Maldini and Shevchenko finishing the old lady once and for all. An all too distant memory as EPL teams dominate the finals and Italian hopes are pinned on false contenders like Inter and Roma.

Granted times have changed, at the moment Milan have eclipsed Juventus whose run of draws has been puzzling. Early on in the season I thought Juventus had the ability to challenge for the title, I was even jealous of their inclusion of youth such as Marchisio, Chiellini, and Giovinco, I couldn’t help but envy this brash youth movement as they rebuilt following the dark ages season in Serie B. We all know if calcio very few things go as planned and as Juventus fans shake their head wondering what went wrong, and if Ranieri will last past the weekend, we Rossoneri fans have our heads high following five straight wins and a small assault on Inter albeit late. These games are always a joy to watch, and as I think back to the last meeting where Zambro was sent off and Juventus sent Milan home with heads hung low and a season declared dead so early on, revenge and retribution are once again the words that come to mind.

True to form the tinkerman’s starting lineup is hard to predict, and with just as many injuries to the back line as us it is hard to tell who Juventus will send in to contain the reborn Pippo and Ricky Kaka. A disjointed locker room may also see some faces relegated to the bench while offensively Juventus have their lost their way and goals have come but without urgency or precision. Due to Nedved’s suspension we will be treated to Giovinco who just a few weeks ago scored an outside of the foot goal that I still remember as spectacular, a player very capable despite what appears to be a lack of faith at times from his coach. Rossoneri midfielders Ambro and Becks as well as the defense will have their work cut out for them against the pacy little man, and cannot forget the likes of Amauri and Juventus’s answer to Maldini in ADP. A clash of true club icons that we will see for the very last time… 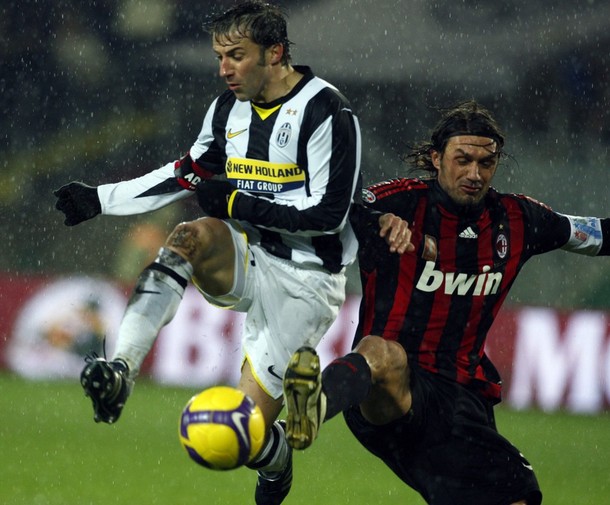 As for Milan, it seems Carletto will stick to what works, the classic XMAS tree with Pippo as the star. Can you argue considering the results? Dida appears to have recovered from back pains and Zambro and Janks will run the flanks while Favalli and Maldini will hold down the center. Ambro should continue his good form, and if Pirlo can play and spray passes as he did last week, Juventus will find it very hard to contain a what has become a very potent in the last few weeks. Even David Beckham understands the magnitude of a game against Juventus as he claims this is a fixture he has been waiting for since joining Milan and I hope he can deliver on his excitement.