Five straight wins, fifteen points, and a total 13-1 score line, is all about you need to say about this Rossoneri ball that just seems to keep on rolling. A reborn Pippo, a healthy Kaka, and a good old fashioned Pirlo makes the next month of the season look all the more promising. A historically difficult trip to Sicily was not all that bad as the old Inter Keeper, Walter Zenga, was left picking up the pieces of his usually well organized and disciplined squad.

Credit to Catania for putting their foot down in the first fifteen minutes or so, but in classic Milan fashion they took the best their opponents had to offer and came thundering back. A close call from Favalli, was soon forgotten as Pippo netted number fourteen, scoring twelve goals in the last eight matches and leading the resurgence of form for the club offensively. Milan could have easily scored a few more while keeping Catania at bay, but Pippo, Kaka, and even Maldini were unlucky. 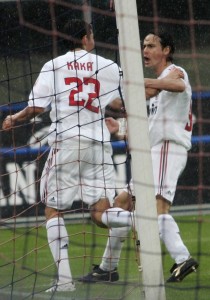 The second half saw Milan come out strong yet again looking to bury the game, but Kaka was the only player to find the net, despite a run of play lasting around fifteen minutes which saw Pippo miss two sitters hit a post, and Kaka just inches wide as well. Kaka and Pippo, as well as the wing players, seem to have a found a groove that no coach would want to disrupt at the moment. The interplay and passing were so superb, even with the likes of Pato and Ronaldinho bench Carletto can keep the same guys out there still yielding results.

The biggest surprise for me today was are old friend Andrea Pirlo. When Pirlo is on there are few players that can replicate what he brings to the table. Catania’s inability to hurry and suffocate him thanks to Seedorf, Ambro, and even Beckham's work off the ball allowed Pirlo to spray 20-30 meters around the park making Milan all the more dynamic. For a few months following Rino’s injury I thought Pirlo would have a difficult go of it, but he seems to have gelled and excelled with Ambro’s presence, and Beckham adds a dimension of passing that takes a bit of pressure off Pirlo as well. The midfield was strong today, and has been for the past five matches, and we all know that if Pirlo can operate with precision our Rossoneri become a very tough nut to crack.

Seedorf built off last week’s performance to have another solid game, and his work ethic compliments Kaka so beautifully that even the most ardent of Ronaldinho supporters have to wonder if their former golden boy will ever see the pitch again. Frankly there is no need for it, and as Kaka continues to excel and regain form, there is no reason in the world to disrupt his play by adding in his countrymen. We all saw what they could do together, but I for one am really enjoying what Kaka seems to be doing on his own! Not but a few days ago this lovely gem was sitting in the comments…

KAKA IS JUST THE FLAVOUR OF THE MONTH ONCE HE LOSSES THAT SPEED THAT’S IT FOR HIM.

But with his passing, movement, and even the ability to hold the ball today, I hope that flavor last a little longer, and his commitment to the club should be reciprocated as well.

Lazio was unable to do us a favor, can’t blame them really for the drubbings we handed this season, but Inter seemed to poised to hold onto the lead, but it doesn’t mean we can’t hope, dream, and enjoy the next month of calcio. 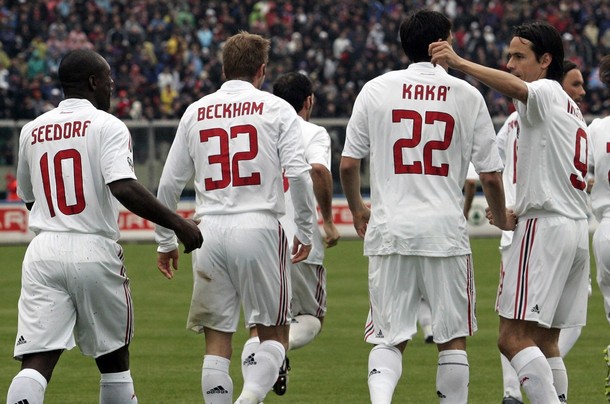