"Maldini, what superlatives & honours can you make up that havent already been attributed to him or pinned to his chest, Worlds best.........., All time highest........etc but none of these get across the magic that you witness when watching the man play

My memories of Maldini are of him in the World Cup (especially '94), the CL and Serie A when we were stomping the opposition, my fave memory(s) are always the slide tackle, you know the one, where a striker is running down the wing and Maldini comes from behind and robs them and they dont even know until another 3 or 4 feet that they no longer have the ball! Class! None of this smashing into a player BS, for me Maldini is for me in one word, FINESSE 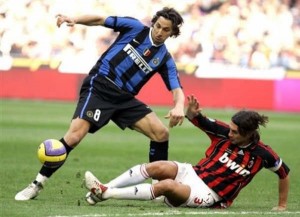 Even when things look like they are getting hot on the field, players are jostling with each other, things are getting hot under the collar, Maldini can always be seen to calm a situation down just by his mere presence (Chiellini aside lol), you will always see him laughing and joking with his counterparts between any break in the play or when coming out of the tunnel, this is the sign of a great man who commands respect from opposition players and fans alike

If im honest, i had my doubts about him carrying on for one more season but with the displays he has put in im happy to publilcy admit that he has proved me wrong and greatful for the chance to finally go watch him play at the San Siro where i met up with fellow Milan Offsider Sam

We were both at the Juve match and even though it was my first time at the San Siro the event was completely overtaken by the fact that i was witnessing one of Maldinis final matches, i watched every run he made, every pass and looked on with a furrowed brow. In his own words the day he retires will be sad and im pretty sure i can safely say that around the world millions of fans will share in that sadness. For me also will be the memory of watching him having played in Milans best ever backline, NO, not with Nesta, Stam & Cafu but with Tassoti, Costacurta & Baresi and the reason for the lines of stress across the forehead was the worry that we will miss not only our Captain but the fact that we have no direct replacement for him

I will always cherish most the memories of the overlap of Baresi & Maldinis careers and truly doubt i will ever see the like again, losing Baresi was traumatic for me truth be told but the blow was lessened by the fact that we still had Maldini, no such luck this time round!

For me, we are about to lose not only one of the worlds best defenders or captains or team lynch pins but someone who is possibly our last link to a time when football WAS just about football and LOYALTY seemed to mean something

He transcends the commercialism that has now fully enveloped his sport, he even transcends his club and country like any true legend, sure we can and will find another defender but ask yourself, can you truly replace Maldini and everything he represents??

I honestly doubt it,