A Tale of Two Captains

Share All sharing options for: A Tale of Two Captains

Tifosi di Roma will always cite their grand captain, but as he takes the pitch this Sunday on the day that the San Siro will say goodbye to the Greatest Captain to ever play the game, the Greatest defender to ever play the game, and ultimately one of the Greatest players to play the game, you can’t help but get sense of perspective as to how grandiose the career of Paolo Maldini has been. In fact the comparison is virtually nonexistent, and you are left with this highbrow feeling of is there even a comparison? I am sure Roma fans can argue, but Milan fans can smile and nod knowing where the truth lies.

I have been hard on Roma, I won’t deny it, I always have, but rightfully so. They had their chance this year to prove their ability, to hang with the big boys, and claim a stake in Serie A’s big four. Instead they did what any good little brother does when big brother is back town; cry, whine, and play themselves out of the CL. If you thought a year without the CL was devastating to AC Milan then for Roma it will be crippling. Transfers, prestige, and money all lost making next season all the more challenging, I would say I feel for them, but frankly I can’t and don’t, and though I could say I told you so, I find it easier to have pity.

I will stop there because this occasion is far to grand to bog down with my feelings toward AS Redcard I mean Roma. On Sunday the San Siro will be the stage for the final home game of Il Capitano. Granted I feel as though as I have prepared my whole life for this game, but never thought it would actually happen. Never thought I would have to come to grips with this match, this moment, and this reality. As I pour over stats: the matches, the victories, and even the losses, as I read the testimonials of teammates who see the importance and magnitude of this match, I ask myself what better motivation can anyone anywhere need to play this upcoming match. How can any Rossoneri player not want to give back a small fraction of what Paolo Maldini has given to them, the club, the city and calcio!? Frankly this game is a must win, Milan locks in second place and waves goodbye to Paolo Maldini with a victory and hopefully a lap of honor never before seen since the likes of Franco Baresi. 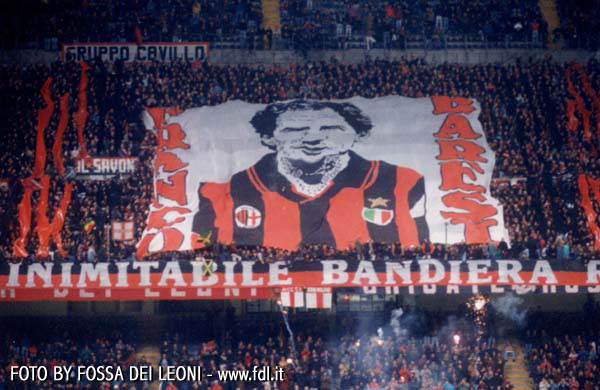 As for the match Milan are coming off a pitiful performance at the Fruilli. Arguably the worse performance of the New Year, and they will have to rebound. The ever burning question is always two strikers or one, and if it is one who will it be? We can’t forget the Pato show when we visited the Olimpico, but his form of late has left room for improvement. Roma’s defense last week was as leaky as they come, and two strikers may prove a problem for the “World Class” (on a side note, doesn’t one have to earn regular National teams caps to be World Class!? Just a thought.) Mexes and company. Pirlo will also need to be on form as his possession and passing will keep the ball away from the Rossoneri kryptonite man of Mirko Vucinic. I will admit the Balkan man does give me nightmares, always has, I can still see his goals against Milan, but one has to think that the atmosphere of this game should go a long way in helping Paolo keep both Vucinic and the “deity” of Rome under wraps. My old friend Danielle DeRedCard found a way to get booked and suspended for this match as well, despite his “World Class” schedule, to miss out on this match; it is all well and good for Milan though as it hopefully opens space for our boys to operate in the midfield.

As always no prediction here, but just the mere though that this match will be final time Maldini pulls on the Red and Black at the San Siro should be more than enough for teammates, coaches, and fans…