Share All sharing options for: Can't Trust an Ex-Interista...

I don’t like Catania, not in the least. First of all they don’t suck, they can play football with the better clubs and they know how to disrupt an attack through organization and pressure. Second, travelling to Sicily is great for you and me, but for football clubs coming from the mainland it has not been all that kind. The last and final point is the man in charge, I don’t like him, I don’t trust him, and I sure as hell don’t look forward to seeing him on Sunday. 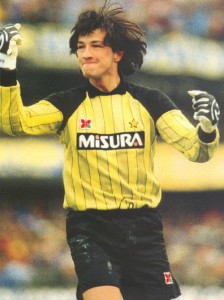 For me, my earliest memory of Inter was Walter Zenga, the hair, the hat, the Azzurri run in 1990. My cousin loved even idolized that guy, wore his GK jersey to practice, and even played GK so he could be like Zenga of Inter. The only saving grace I had watching Zenga, was knowing that Milan would usually prove the better squad and I would get my last laugh. In 1997 I got to meet one of my boyhood hero GK’s, Tony Meola, following a Revolution v. Metrostars match at Foxboro, and out of nowhere comes Walter Effing Zenga, schmoozing and giving autographs, needless to say I passed. Walter I have to say I am not over it, and your synonymy with Inter makes me wonder what your motives are tomorrow.

We could sit here and worry for hours if Zenga will send his clown colored elephants out to break Rossoneri kneecaps for the love of the blue and black, but we all know what is more important. Milan need to continue this torrid run of games that has them being mentioned among Europe’s elite clubs due to their top class run of form. A run that has really cemented Carletto as a solid leader, and his squad choices, iffy to some at first glance, have scored goals at will, and earned 12 points out of the last four matches.

Not going to delve much into the probable lineup, because it is still up for debate as to whether Carletto will go attack minded or defense minded. Three points are a must, so attack is a primary goal, but it doesn’t mean he can’t employ the xmas tree as he did last week. The bottom line is his three best players as of late should get the start regardless of this ridiculous photo. 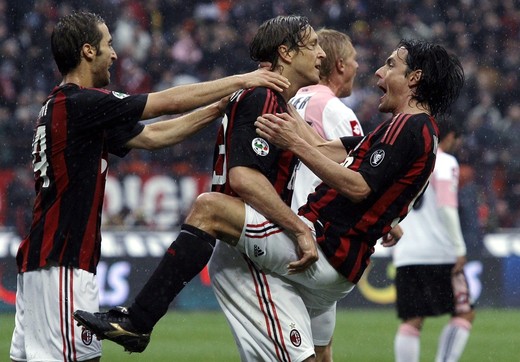 With Janks possibly being shut down for the season Flamini may have found a permanent home on the right with Zambro on the left. Ambro has been tireless and with him one side and Flamini on the other that workman attitude is flowing nicely. Pippo’s goal tally speaks for itself, and this resurgence of form is all thanks to the greatest poacher the modern game has ever seen.

Catania can prove extremely formidable, but this is game we can win, should win, and must win, if we want to keep pressure on Inter. All we can do is mind our business at the moment and hope Milan earn points the whole way out, what Inter does is gravy but it doesn’t matter unless Milan do their job first. Is it possible, sure anything is possible, so let us hope for the best for once and most of all enjoy the ride of what may be the best month of calcio we have had in a long time anyone say 2007 CL...