Let me start off loud and clear. The first PK was a tough call, sure you could argue that it was a just call, but you can even argue that Roma are a good team, it doesn’t mean you are right. Did Milan need the PK to win? Absolutely not, Milan were the superior team on this day and watching the Ambro to Pippo link up reflects that time and time again. I have never been one to complain about ref’s considering the "hand of the emperor" goal in the derby, these things happen, and they are part of the game. In the end they will all even out, but to see Inter fan’s calling these calls’s dodgy is a bit hard for me to swallow. And am by no means here to review the performance of the referee but these things all even out in the end.

The second PK was just as tough a call, but again this is the way the game is played at the moment. If a defender, any defender drapes his arm, body, leg , and hand over an attacker and the attacker goes down a PK is more often than not given. Balzaretti made a mistake, Kaka embellished that mistake, and the rest is history. Do I believe what Kaka did was right, by all means no, but if the ref rewards that behavior then it will be part of the game until that is corrected? Had Palermo played a dangerous ball into the box and Cavani done the same thing, I couldn’t argue. Problem is Palermo didn’t test the Milan defense so in the end as I said earlier the better team won. 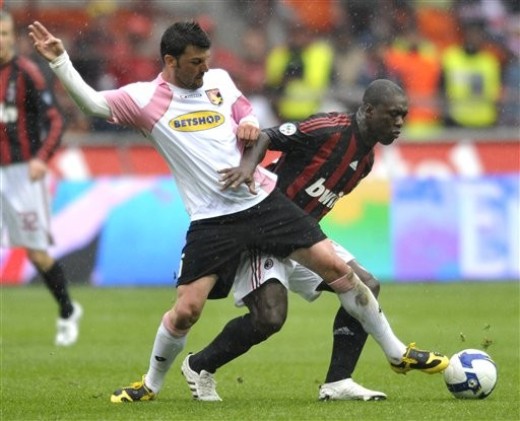 Before the win I saw some interesting comments, mainly regarding Seedorf and Janks. Seedorf has easily become the most talked about player on this blog. Yes he made mistakes in this match, but if you watch a second time with a pad and paper count the amount of times he was passed the ball under pressure of more than one or two players. For me he managed to put himself in great positions today, did well on the ball when given space, and clog the middle which is what Carletto wanted. Janks is a funny one because for weeks on end I read comments about playing the most inform players, hell I even preached it myself, and last week arguably Flamini was the most in form player on the pitch at RB, so what would you have done? Benched Flamini for Janks, or kept the status quo…exactly… 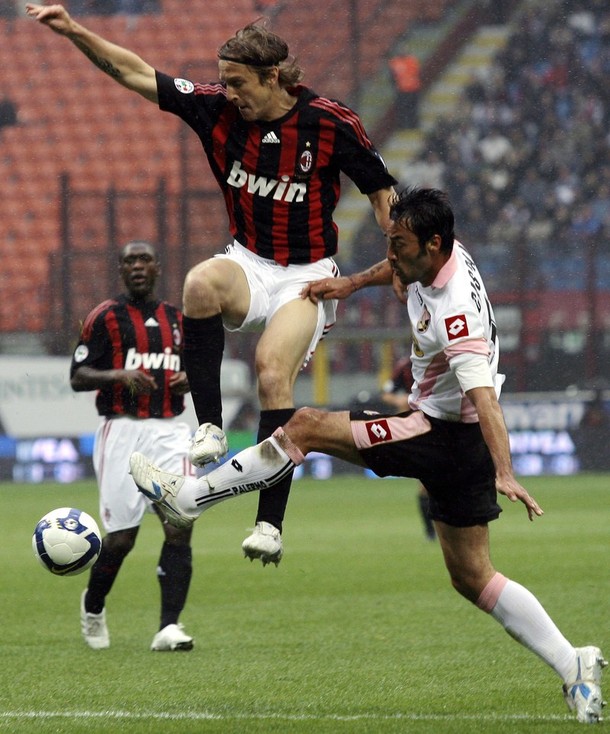 Another gem of a game for Ambrosini, the announcer kept talking about Ambro leaving the club at the end of this season. It shocked me a bit because Ambro is not the flashiest midfielder, fastest, or even most technically sound, but his cross today was world class and his ability to get his butt in the right place at the right time is second only to Rino, with Flamini earning some praise in that regard as well. If Ambro wanted to leave for guaranteed first team football season, I couldn’t argue with him or fault him, but I hope he stays at the San Siro and continues performances like those of the last two weeks.

All and all another very solid performance for the Rossoneri on the road to a potential return to CL football, and though I don’t often comment to on the performances of other teams it is important to take a quick look at the teams surrounding us on the table. The Don did is a big favor by taking three from Inter. My father and had a discussion about both Mourinho and Inter today surrounded around the fact that Mourinho is a guy used to have big games to gear himself and his team up for. With Inter out of CL and the Coppa Italia, Mourinho will have to do a lot to get this team geared up for the final stretch. Yes their schedule is much easier than Milan’s down the stretch, but I can’t help but be a little excited about the next five weeks…join me if you will, but stranger things have happened….