Should Abate be Brought Home?

Share All sharing options for: Should Abate be Brought Home?

Just a few days ago on the previous Maldini Monday we embarked on a great discussion regarding the possible return of Ignazio Abate to the Rossoneri. On Sunday as Milan took on Torino many of us watched in anticipation as Abate took part what you could only a call a job interview in the simplest of forms, and based on his performance you can make your own decisions, but this idea of brining Abate home extends far beyond just Ignazio, but to the rest of the Milan players out on loan as well.

On Saturday prior to the match, Carletto was quote as saying that Abate had improved however his style of play didn’t fit the current Milan system. Goal.com of course took this quote and ran with it to run a simple story entitled, “Ancelotti Rules Out Abate Return.” Now we all know what Goal.com is capable of, so we take such titles with a grain of salt, but one can’t help but ask and even wonder what the Milan brass will do in this circumstance.

Yes Abate’s performance was not top class on Sunday. Sure he burned Maldini for pace early in the first half, but he is a speedster, but at times he tried to do a lot when little was needed. He also over ran a few balls and made some heavy touches, nerves, lack of experience, whatever it was it was ailing Abate. Syed and I had a great discussion regarding a Abate a few weeks back, since then I have watched him whenever possible, and to say his performance Sunday was uncharacteristic is a fair assumption. Against Juventus he was marauding, scored a cracker, and was oozing confidence to take on players with his pace. This is the Abate we are all bargaining for and at 23 years old there is marked room for improvement. A fixture of Casiraghi’s Toulon Tournament Azzurini setup, Abate’s versatility should have Carletto and Fester’s mouth watering considering his relative low value to bring on board. 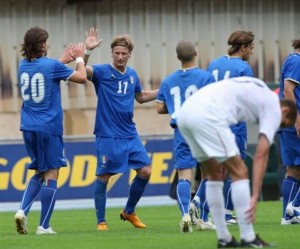 Stop for a moment and remove Abate, the name and player, from the equation. What you have is a pacy player with a solid shot, defensive attributes, and the ability to play anywhere on the right flank. Sounds like the dossier of former Milan danger man Serginho, except of the right sided variety. We all remember what Carletto did with Serginho don’t we?

His runs from the back where spectacular and his ability to cross and even score were fantastic, not to mention it lengthened the career of Il Capitano allowing him to focus on his stellar defense. Milan would be stupid not to take advantage of a player with this type of tool kit.

Now let’s include Abate the player and the name into the equation. A young Italian player, inexpensive transfer, and tons of upside! Isn’t this recipe to Fester’s new and improved cost efficient transfer window? Wouldn’t it better to give a young Italian a chance to play here instead of Roma, Fiorentina, or even Inter!? Doesn’t it make sense to harness that type of versatility on a team that is a bit rigid in player positions and roles which at times has made substitutions and tactical switches a nightmare? A few years ago Milan took a chance on a LM in Marek Jankulovski, a current CL winning LB, why can’t that same chance be taken on Abate?

Imagine for a moment a close game and Abate is brought on, his pace could devastate opponents, but his ability to track back and forth make him all the more valuable. The occasional cutting run or even a goal is truly icing on the cake. We saw how successful Flamini’s versatility was on the weekend, why can’t we add more players like him to the fold? But it doesn’t stop with Abate. Milan have players like DiGennaro and Paloschi playing solid football on loan across Serie A and B, shouldn’t they be given a chance before another marked veteran or Brazilian youngster is brought in? 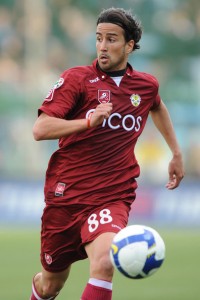 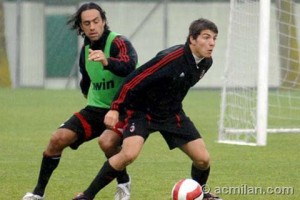 Not to mention wouldn’t a transfer for a co-owned player be far less money than an established foreigner? If this team is going to make a fundamental change it needs to start with the support and trust in the youth system that has produced some of the finest players Calcio Italia has ever seen. Rebuild the Italian core, trim the veteran fat off the team, and support your established superstars, and suddenly this Milan team is in a far better position than we all give it credit for.