A slight bout of boredom here at the office has given me a jolt of creativity as I contemplate the upcoming match with Torino and get those thoughts down in a post. On paper Milan should win this game, Torino is in serious relegation danger, and a side with good players: Rosina, Bianchi, and Milan’s own Ignazio Abate, has seriously underwhelmed and underperformed week in and week out. The coaching carousel probably does not help matters, but in the end this is a team which many expected to do far better than it is. But this is exactly what scares me about Torino. What is stopping Rosina from having a stunner or Bianchi from scoring a brace? Nothing really, certainly not the Milan backline, but based on form this probably won’t happen, but again anything and everything is possible.

The big news out of Milanello is that Dinho and Becks will once again be on the bench. Beckham who was a fixture prior to April has fallen out of form and favor as he has not featured in the past two matches. Not much word coming out as to why, but fatigue may have been a factor, but the surge in form of Flamini and the return of Ambro may have something to do with that as well. Dinho who played well in his brief time against Lecce a few weeks back is also left off again, which I feel is more of a byproduct of the system. However, with Ambro and Flamini alongside Pirlo I could justify the gamble of Dinho alongside Kaka. Too bad past starts featuring the Brazilian trident have been less than stellar, but at this point, if including Seedorf helps us get the three points, I am more than happy to stomach the performance.

Defensively Janks is out so Favalli and Zambro may run the flanks with Maldini and Senderos in the middle. Senderos has made progress in the past few weeks, though at a snail’s pace, but these next few weeks should go a long way in determing how he is handled in the offseason. If you want my honest opinion I say thanks for the memories, but if he can solidify his form and place, then we can argue for his retention and chance to compete as a starter next year. The CB position is not chock full of talent in the World at the moment, and when most teams have them they want to keep them, so if you can find a guy who has some skill and has played in your system it may be worth some consideration before he is let go. 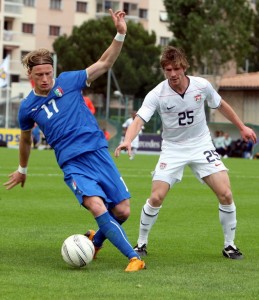 My biggest point of interest for this match is Abate, who I have been following as close as I can with every televised Torino match. First and foremost I like his pace, but his versatility is key as well, Torino should employ him as a wing back this weekend, but he can be used in almost every role on the right flank. He has even been tucked more centrally for the Azzurrini, and can play in an almost Kaka like position. If in fact Abate is brought home, as promised and discussed, it makes for a very interesting dynamic if Gourcuff is returned as well. He will be inexpensive and a great step at rebuilding an Italian foundation at the club. Just hope he doesn’t score!!