What Have We Become...

Share All sharing options for: What Have We Become...

International breaks are always a little tricky for me. Part of me wants to take the weekend off, forget about Milan, and just enjoy world class football. We all know that forgetting about Milan is a monumental task especially considering the circumstances of our season and the goal to finish in the top four, but as I sit here and something doesn’t feel all that right.

I don’t plan on sitting here and ranting for hours about Lippi and his pig headed complacency and the Azzurri, but as I look at the roster it hits me like a ton of bricks. Today may be the first time in my recent memory that an Azzurri squad is put onto the field sans a Milan man on the pitch. 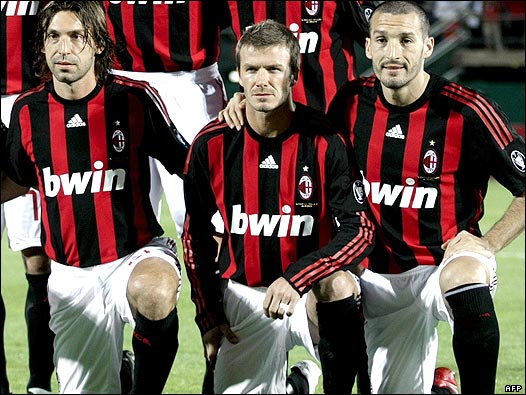 Sure Pirlo and Zambro are called up and may get the starting nod, but if not, we have really a hit a low point as a club and to some extent as a country. More as a club, because the player’s are not on roster to be called up…

Again, I am not going in depth here about Cassano, or about DDR potentially playing Saturday while being suspended for Roma. The point I am trying to make here is that as a club we have lost the plan, gone are the days where Azzurri and Milan were synonymous and symbiotic, and if you weren’t from a red and black club you were from a black and white club. Now don’t get me wrong I love seeing guys like Quags and Toto on the roster, it shows how far Serie A has come, but as an Italian Milan fan I am disappointed. People say it is always country before club, but the loss of identity is hard for me to swallow at the moment.

So today I will watch the Azzurri, but this evening I will root for the United States….